See I would disagree entirely with Mad Max.

See I would disagree entirely with Mad Max.

IIRC Mad Max was a classic example of Post Apocalyptic Piecraftian Dieselpunk according to the original Gatehouse Gazette discussion that defined Ottensian and Piecraftian (GG server currently down...can't check this at the moment).  I could certainly consider it Technologically Dieselpunk due to internal combustion being the base technology, though it certainly is 1980s Punk-Punk by aestetic with only a handful of "Diesel Era" things like some 1930's vehicle conversions and that guy with the gyrocopter and the classic aviator's helmet.  Arguably it's Atompunk due to the post-atomic setting.

And this is why labels can get annoying.  Few things politely line up with our definitions.

I agree, Cap'n. Mr. Piecraft did indeed list it in the landmark issue of Gatehouse Gazette, "Discovering Dieselpunk". What follows are simply my opinions.

I think what's missing in Mad Max was what is also attributable to the Gatehouse Gazette as well as the now extinct blog The Flying Fortress, which is 'decodence'. I generally define decodence to be the sense or feeling of the era 1920s - 40s. Decodence tends to be rather subjective. The guide, in my opinion, is if you see something (movie, fashion, art, car, etc..) or hear something (such as song) and your gut feeling is to say, "That reminds me of the 1930s..." then one can say it has 'decodence.'

To me, decodence is the meaning of the 'diesel-' prefix in dieselpunk. And without it I'm hesitant to include it in what I consider dieselpunk for me.

Consider that the reason it doesn't fit, might be because you're trying to place it in the wrong box.

I have just been playing with a word association game. 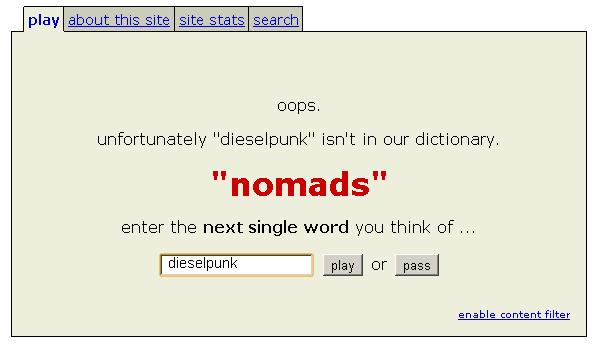 Yes, Larry, I think the "Decodence" is what it's lacking from what the general consensus of DP seems to be, save the handfull of small things like I mentioned previously.  I'm filing it under "Late Post-apocalyptic Atompunk" for the time being ;-P.

I love that movie so much! From how everyone looks in their period costumes (damn, damn, sexy). To the Hydra troops with rayguns fighting the world war II Howling Comandoes, the Flying Wing, The Hydra Car, The Super Tank, I could gush forever.

And yet, at the end of all that, it's basically Captain America's Origin - A superhero movie. Personally I think that just speaks to the versatility of the Superhero genre. You can go from gods and fantasy like Thor, to Transhumanism and Sci-Fi like Iron Man, to Dieselpunk and war movie like ol' Cap.

I've been puzzling over this topic for awhile. My dilemma = How the heck do you pick just ~ ONE ~ item???

I have to agree with every post on here as to what = Dieselpunk. (well, except that Mad Max = Dp. Just don't see it. Never have. Never will.)

For me, I would have to pick a whole category and not just a single item within that category. Therefore, ~ WEIRD World War Two Stories ~ most definitely gets my hands down vote for what = Dieselpunk. From the old classic comic books and Pulps to the new novels and graphic novels. Right on through to the new RPGs, video games and movies. If its got heroic soldiers of the WWII era facing off against the evils of mad scientists, aliens, the supernatural, technologically insane war machines, or just run amuck misplaced dinosaurs . . . THAT is my sure fired definition of DIESELPUNK!

And, yeah, I would even throw those Spandex (and Non-Spandexed) superheroes like the ol'Cap, Rocketeer and Hellboy into that WWWII listing as well!

I think that the game "Valkyria Chronicles",by Sega, is dieselpunk.

Though being set in a different world, the game is set in 1935 in a fictional Europe ("Europa"), and it has all the same political strife that was existant in OUR Europe of that time.

It uses technology that is a slight fantastical exaggeration of what we had at that point, and it uses that tech in much the same way that we did at that point.

To expound on the political strife, it was seen in Europe in 1935 that war was coming. In Europa, war had just started (a very real possibility for Europeans in 1935). Further, in VC, the continent is dominated by two major powers: The Atlantic Federation (knock-off of the League of Nations), and the East Europan Imperial Alliance (knock-off of the USSR, with elements of Nazi Germany). This is how much of the Continent felt at that time, particularily in E.Europe, where you were stick between Nazi Germany and the Union of Soviet Socialist Republics.

These political and technological factors combine to prove (to me at least) that Valkyria Chronicles classifies as dieselpunk.
Agreed. Awesome  game.

I love that movie so much! From how everyone looks in their period costumes (damn, damn, sexy). To the Hydra troops with rayguns fighting the world war II Howling Comandoes, the Flying Wing, The Hydra Car, The Super Tank, I could gush forever.

And yet, at the end of all that, it's basically Captain America's Origin - A superhero movie. Personally I think that just speaks to the versatility of the Superhero genre. You can go from gods and fantasy like Thor, to Transhumanism and Sci-Fi like Iron Man, to Dieselpunk and war movie like ol' Cap.

The anime series Last Exile is frequently classified as steampunk because their base technology is "claudia water," an additive that makes water both steam generating and, apparently, anti-grav . . . but those VANSHIPS!!! Pure dieselpunk.

Another series I like, Fullmetal Alchemist (and the closer-to-the-manga reboot, Fullmetal Alchemist: Brotherhood) has a distinctly dieselpunk vibe, from the uniforms to the various technologies.  It takes place in an alternate dimension, in a 1931 world where alchemy replaced religion 400 years earlier.