While fumbling around the old Miskatonic Library, I came across an oddly colored motley of young musicians. Surprised at first to see anyone studying at such a late hour, the musicians dusted the cobwebs from their slender hands and introduced themselves. Founded by Robert Hazelton and fellow Abney Park alum Kryzstof Nemeth, The Deadly Nightshade Botanical Society found its footing as a musical force to be reckoned with in August of '07. With the help of fellow members Erica Roberts, Robert "Sky" Gardunia, and Anastasia Oleinikov, the band just released their first full length album, Clockwork Dreams.

Dizzy: The Deadly Nightshade Botanical Society is an ancient and at one time secret society made up of explorers, scholars and monster hunters. We felt that it was time some of the amazing stories found in our vaults came to light. A group of investigators were chosen to reveal select cases in songs and prose. Each piece on the Clockwork Dreams CD reveals one of the astounding cases found deep within these vaults.

Robert: My influences as a guitar player consist of heavier bands like Dream Theater and Rammstein. I think that those come out in the sound of the first CD quite a bit. I go for hard-hitting, concise distortions and for that I use the Parker's active pick ups. As far as the rest is concerned, I use a combination of Reason 4 and a bunch of instruments compiled through Project 5 version 2.5. This is where we get the lush strings and crazy ethnic instruments (like the sitar in These Eyes as an example or the cello in Lost Clockwork). We don't have any special microphone equipment but some of the recordings were done with a Dragonfly.

Sky: Musically, I'm fairly influenced by progressive rock bassists (Geddy Lee, Chris Squire, etc.) whose ability to mix melodic phrasing into their songs is legendary. I'm using a 4-string Spector bass (which can be seen in our live video) running through a DigiTech BP200 just to enhance the tone a little. The Spector also uses active pickups and produces a great sound all it's own so not much is needed in addition.

Your web samples have a really deep, polished edge to them (especially those bass lines) that you don't hear too much anymore. Who's in the booth helping get that richness out of everyone, and can you give them a pat on the back for us?

Robert: I recorded all of the music for Clockwork Dreams privately with a bit of help from Kryzstof Nemeth. He provided the bass lines for all but one song on the CD and he worked hard to come up with unique sounding bass tones that would drive the music. In that regard, it was all us getting the music where it needed to be.

Vocals were a bit different. These Eyes and Tender Wounds were recorded at a friend's studio on Pro Tools, exported out and then re-applied to Sonar 6 on the computer at home. Clockwork Dream and Legacy were recorded at the Abney Park studio with Robert's help throughout. The rest of the songs were recorded by ourselves over the course of a month whenever Dizzy had time off.

So I guess the concise answer to the question is that I was the one in the booth... only the booth was a mostly clean apartment that was hot as hell for the last two months of recording! I'll consider my back officially patted though ;)

Do you have any special gear that you've become attached to over the years, or do you enjoy the Christmas day experience of picking up new instruments and racks when they catch your ear?

Robert: I've used many different guitars but the most recent purchase of the Parker has been my favorite. I use that for live stuff and all distortion tones on the CD. I also have a Variax for clean recorded stuff. I've been using Line6 gear since Pod 1.0 was new. My most recent is the Line6 XT Live though I'm eyeing the Boss GT 10....

Sky: It's just really the Spector 4 string. Had it for 22 years. If I bought another bass it would be a Spector, hands down (just in case there are any Spector reps reading, there's your 16 ton hint!). I have been looking lately at the Pod X3 or (with Robert) the Boss GT10 for the dual tone processing options, which is something I used to do many years ago with hardware. Not sure if it's necessary, but it sure is damn cool.

With Makers Faire behind us now, we finally have a chance to hang out in the garage and let our eyebrows grow back. Did you guys have a chance to attend, and if so what did you think of the 2009 setup?

Dizzy: We didn't make it to Makers faire, and I did some pouting, but we stayed home instead and selfishly finished the CD. From what I've seen and heard though we missed an amazing event. It never ceases to amaze me what members of the steam and diesel punk community can do, I deeply regret not getting to party with all those mad scientists!

Our internet gremlins tell me that you not only had YouTube spies at your last performance at Heavens, but that your full length CD is finally out. What can you tell us about the new push? Are you going to be touring and if so, where can we catch up with the Society?

Robert: The Deadly Nightshade Botanical Society push is really just us lifting our collective heads and peering around. While we were recording the CD, Kryzstof and I knew all the songs (of course). At that time, we just had to train Dizzy up so that she knew all the lyrics and her parts. Unfairly to her, we just threw her to the wolves and as soon as she knew a song, we recorded it.

When Kryzstof moved away and we had to get a new bass player, we basically had to start from scratch. Despite the fact that we had released a full length CD, we all had to learn the songs together as a band. We practiced quite a bit before we finally decided that it was time to play a show.

In many ways, we needed that first show to take things in the direction we wanted. Taking the video and presenting it to You Tube was part one. Getting the photos of Dizzy up for her Steampunk Pin up concept was another part. The Casebook and getting ready for the second CD was another. Overall, we're just doing all that we can to make people aware of Deadly Nightshade Botanical Society music.

As far as touring is concerned, we're not going to be taking to the road quite yet. We really want to play conventions and festivals with other bands and we'll let everyone know when and where the moment we book anything.

Has the band been signed, or is it taking the new musician-based DIY approach?

Robert: Deadly Nightshade Botanical Society isn't signed to any label, no. We picked the DIY approach to maintain control of everything we do from live shows to what we write to when and where we record. If Abney Park is any indication of success, they haven't signed either and have managed to do quite well for themselves. After working with Robert for so long, we see things in a very similar light. We're approaching the music scene with their model in mind.

With two Roberts running around on stage, which one gets called "Hey You!" when something's on fire?

Sky: When we were both (the Roberts) in Abney Park (with the Cpt. Robert), there were three of us running around. I had decided to go by Sky to avoid the confusion that we were already experiencing. Back then, it was Rob, Robert and Sky. We don't worry about as much anymore, I've just been falling back to Sky by habit (is that a form of anti-gravity?).

What's the best way to bribe DNBS for an encore?

Dizzy: The best way to bribe us is the usual way with applause, but if you're feeling creative, I'm a magpie who will do most anything for a nice ball of yarn.

Anastasia: I don't take bribes. Tips? Yes. Bribes, not so much. For me charity is almost a vice.

Any messages for your fans and loyal listeners as to how they can get the word out about Deadly Nightshade Botanical Society?

Tell everyone about the web site, the CD, the iTunes page... do reviews on iTunes or Amazon

... Friend us on MySpace (we're nice, we'll add you back!), rent space on billboards and post our images, send up airships with banners that scream BUY CLOCKWORK DREAMS!!!! But more seriously, just keep doing what you're doing. Slowly but surely, the word spreads and we get messages every day from new people finding our music.

Thanks to everyone for helping get us this far! We look forward to the next step!

If you would like to purchase the Deadly Nightshade Botanical Society's first full length album, Clockwork Dreams, or Casebook 1, a stand alone book containing short stories inspired by the songs as well as lyrics, please click on the button below. 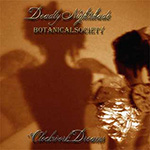 Permalink Reply by Esther Crain on November 6, 2009 at 7:07pm
I met this band at their show in May with Abney Park. They were really nice and down to earth. Robert (the guitar player) was manning the merch booth for a bit and was kind enough to go round up the other band members to sign my CD. Their MySpace page has some new songs by them so I think that we could expect a new CD very soon!

Permalink Reply by Tome Wilson on November 6, 2009 at 10:56pm
Stick around for a bit, Esther. Duffy, the DNBS's singer, contributes a lot to Dieselpunks.

You can usually bump into her in the Music or Fashion forums.

Permalink Reply by Dizzy on November 7, 2009 at 7:15pm
Hey Tome
We changing my name :P Duffy... It could be my witness protection identity! I need a Trench coat and Dark glasses..
Ok teasing you!
Love
Dizzy

This is Tome's evil twin. I have the goatee to prove it.

Tome will be back after the brain transplant.

Permalink Reply by Dizzy on November 8, 2009 at 2:34pm
is ok, I totally understand the brain transplant, I'm on my third one this month, yes I know november just started