Dear ladies and gentlemen of dieselpunks.org, have I got some news for all of you!

Okay, first off I'm currently basking in an atomic bomb of WWII Sci-Fi nerdiness, so please pardon an overly excited air in this post, but anyway, I found something that I can imagine would pique quite a few interests on this website.

But let me preface it by saying this: If it were not for a lot of WWII themed things and Sci-Fi in general, how many of us would be here really? Be honest.

But I imagine that I'm turning this into another post so without any further ado, I give you the link and a poster to IRON SKY. It's a movie made by a Finnish movemaking troupe about Nazi remnants in 1945 who escaped to the dark side of the moon and subsequently settled it, now skip ahead to the year 2018, and they're coming back! The gadgets look choice, and best of all, they mangaed to blend comedy and space nazis together. Now enjoy the preview...

And here is a poster image: 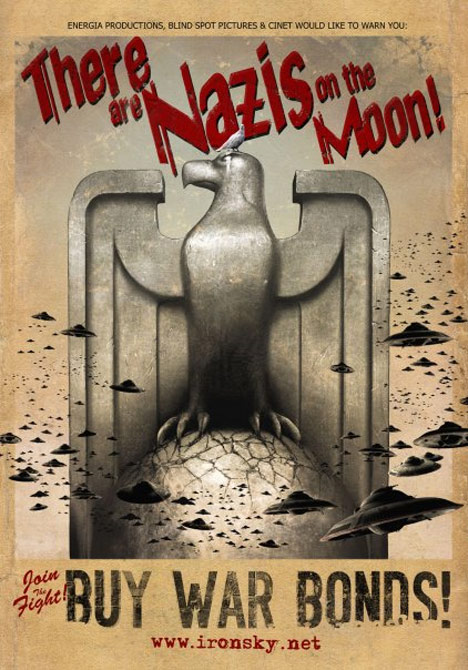 I got the opportunity to watch the movie while vacationing in England. I happened to be there during its short release in the UK.

It had some fun moments, and some funny bits, and overall, the F/X were decent, but I was expecting more of a romping B-movie. Moon Nazis, for crying out loud! I looked forward to the epic battle between them, and the world, in camp splendor.

What we get is Palin jokes. That epic battle I hoped for lasted 5 minutes, and wasn't epic. It was more like one of the "epic movie" parodies, and that's not a compliment.

As I said, I was glad I saw it, and it had a couple of moments, but I won't buy it on DVD. They came up with a great premise, and didn't film it to its full potential. The original trailer was ten times better than the movie in mood, plot, and promise.