BioShock Infinite is set in 1912, prior to the events of the first two BioShock games, Though it has little to do with the plot of the previous games. The primary setting is a city suspended in the air by giant blimps and balloons, called "Columbia". Unlike the secret development of the underwater city of Rapture, Columbia was proudly boasted by the American government when launched in 1900, centralized on the idea of American exceptionalism.
Columbia has been compared to a cross between steampunk and the Star Wars Bespin cloud city, as well as the airships of Final Fantasy settings.
The main character is Booker DeWitt, a former, disgraced agent of the Pinkerton National Detective Agency. He is hired by individuals, aware of Columbia's location, to invade the air-city and rescue Elizabeth, a woman that was abducted as a girl and has been in the air-city since.[4] Though he finds Elizabeth easily enough, DeWitt quickly discovers that Elizabeth is central to the city's conflict, forcing DeWitt and Elizabeth to trust each other in order to escape. 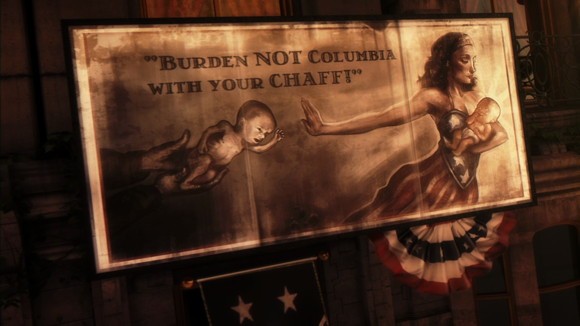 Permalink Reply by Jonny B. Goode on August 13, 2010 at 4:42pm
Looks pretty damn cool to me. Not for someone with a fear of heights though...

Permalink Reply by Quicksilver on February 1, 2011 at 5:01am
really looking forward to this game, especially as you, as the player, do not control the plasmid abilities that made bioshock so famous. instead, it is the girl with the roses who does, and you have to call on her aid. while this does mean working in tandem with an AI, if they make it, or at least patch it, for co-op play, it could well be beyond awsome.

Permalink Reply by Chris Johnson on February 6, 2011 at 11:19pm
Already pre-ordered this sucker.