This abandoned Nazi bunker, a stronghold equipped with anti-aircraft turrets in an impenetrable concrete envelope is now a solar power station... with a cafe.

The hamburg-wilhelmsburg flak bunker was built in 1942 and was in use for the following four years, built as a stronghold equipped with anti-aircraft turrets designed to withstand attacks from the ground or the air during WWII.  Local studio iba-hamburg was commissioned to turn the icon into a useful structure for the current day and age.

Now restored as a public memorial complete with four 30 meter tall towers, the fortress now serves as the surrounding residential area’s renewable energy supply providing heat and power from 85% renewable resources. A steel framing system separated from the faces of the southern wall and roof serve as a substructure for large louvered solar panel strips that output over 100kW per week. At the heart of the bunker, a large storage facility stores up to 2 million liters of water, made in a chamber that was the result of internal explosions triggered at the end of the war. In other rooms, heat is generated through industrial waste, a biomethane gas-driven heat and power unit, and a wood combustion system. In one of the aircraft turrets, 30 meters above the ground, a new cafe has been opened to host the various visitors from around the world. 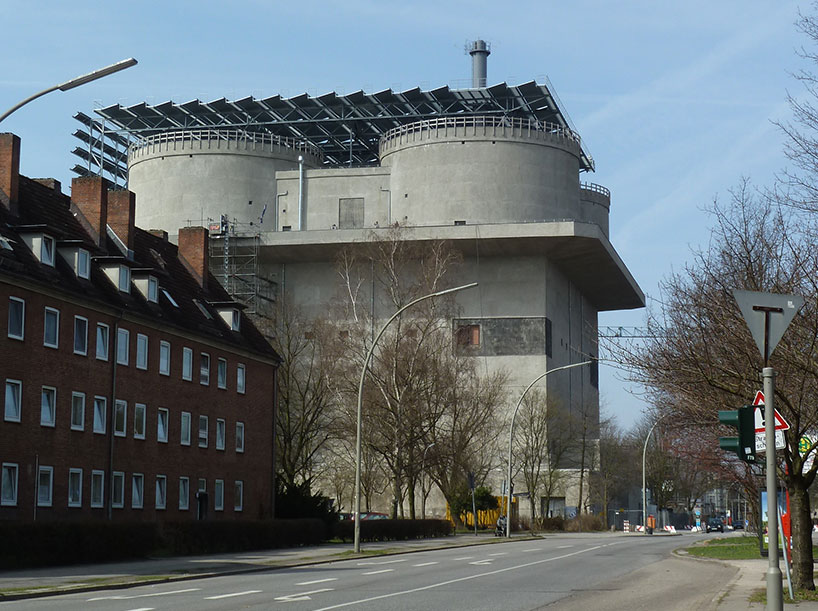 That is awesome! As an electrical engineer by trade and Dieselpunk by choice, I approve wholeheartedly!

* for those interested geeks: kW = instantaneous power measurement; "kW per week" is a nonsense unit, like saying something weighs "200 kilograms per month"

I love when folks find a constructive way to Re-Purpose old buildings! It sure beats the heck out of tearing down the old just build yet another WalMart or mini-mall!