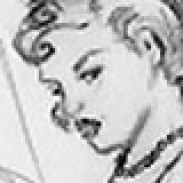 I found myself in Murphy, CA over the holiday and wandered into an inspiring store, The Spice Tin. (thespicetin.com)Spice jars line the walls of this place with a rolling library ladder to reach…Continue

Hi~I've got four 1930s 16mm film reels of what appears to be some sort of vacation footage, a steam ship passage somewhere. I'd love to have these transferred onto a safe, modern format and watch…Continue

While doing some research for my next noir short story, I stumbled upon this great read about dining in Chicago in 1931. It includes a few drink recipes on page 8 (I think).…Continue

The Coffee Contrails, a noir and Sci-Fi podcast featuring original "radio" plays and stories, is now on iTunes. Please support by subscribing at …Continue

Goodness, sorry for all those typos. Working round the clock...exhausted. Should have proofed.

Just got your message, my apologies for the delay. the project is based on my novels and the "pandoran Age" Universe set in the far future, yet it is decidedly as much "magic realism" with mythological allegies as space opera. Stylistically there is a range, as I don't want to tie the creative minds involved, but there is also a huge influence on Midcentury pulp and I try to select artists and designers with an affinity and love for the period. Personally, I've had 2 1962 Mercury Montereys and a 63 Monterey Turnpike cruiser Marauder I used as frivers, and there is nothing comparable on the road IMO to driving a landyacht from that era. Thank you for the interest in the project. We have attached a major executive producer, had some discussions with the first of our A-list actors, which was an eye opener as they apparently are as large in life as on screen, and we are working with a group in Orlando on a 36 Million project financing launch. http://pandoranage.com/