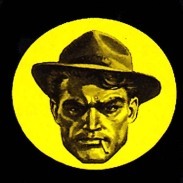 I have always found Military motorbikes of interest,and one of the strangest dealings during the early 1930s was with the American Harley Davidson and the Imperial Japanese Army.In the early 1930s…Continue

All aboard the Dieselpunk Train
10 Replies

I have a few fond memories of toys from my past be it the wind-up Robbie the Robot or the Scalextric slot car set.But my most played with was the Battle Army train set. I loved it,and miss it. Well…Continue

Please tell me what you think. Steampunk Pin up Zippos
10 Replies

I hope you all don't mind i would to ask you all what you think of the following designs which a friend of mine is looking at getting released on some Zippo Lighters.The artwork is by Lorenzo…Continue

In the early 1930s the FBI was given the right to carry guns by congress. As the FBI agents was coming under more attacks and violent crime by gangsters.In 1932, the first issue of the FBI Law…Continue

Elvis is in the building! Welcome!