Article by By Rob Arndt

The original screw propulsion snow vehicle was designed in 1944, during World War II, by Johannes Raedel, a soldier of the German Army and veteran of the Eastern Front.

Raedel had observed that in the deep snows of Russia, tanks would dig out the snow under the tracks, and the tank would become high centered on snow pressed under the belly of the tank.

According to Siegfried Raedel, son of Johannes:

In 1903 French engineer Leon Gaumont was granted patents for loudspeaker systems to go with his sound on disc talking films, which used one of Berliner's Gramophones. 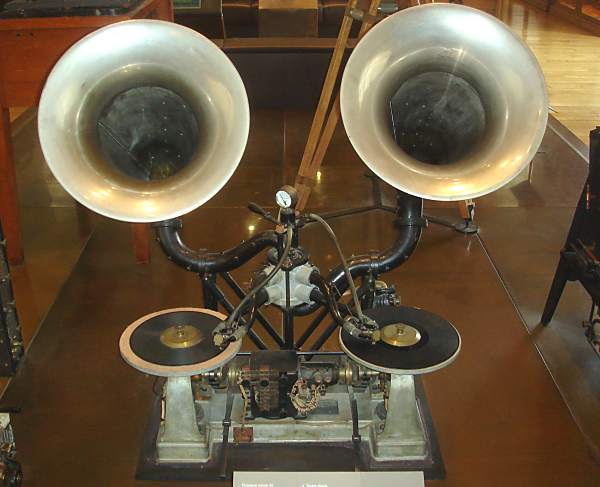 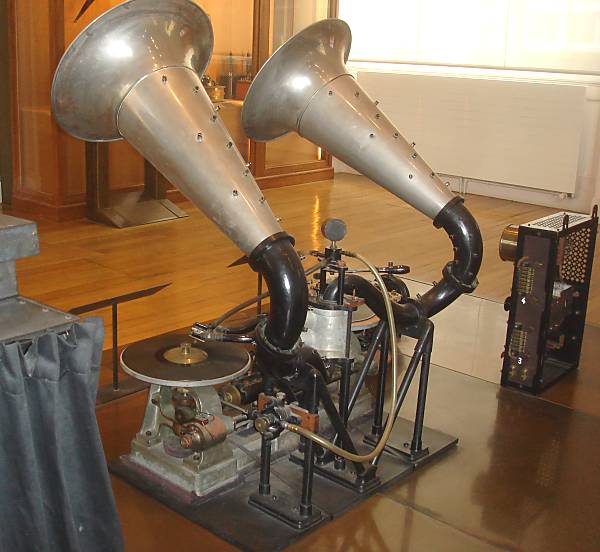 In 1910 Gaumont demonstrated his Chronophone system, which synchronised sound and film, at the Gaumont Palace in Paris. The compressed-air amplifier, whiuch he called the Eglephone, was just a part of the whole system. The… Continue

Think Geek has taken the ever-popular Retro Handset and updated it to connect to your cell phone using Bluetooth technology. That's right! No more tangled up phone cord. Now people will think you're really crazy talking into a old-time handset connected to... nothing.

Buy your handset at ThinkGeek >… Continue


The Ballet mécanique was originally intended to accompany an experimental film by Fernand Léger, but the musical score is twice the length of the film and now stands alone. The score calls for a percussion ensemble consisting of three xylophones, four bass… Continue

While fumbling around the old Miskatonic Library, I came across an oddly colored motley of young musicians. Surprised at first to see anyone studying at such a late hour, the musicians dusted the cobwebs from their slender hands and introduced themselves.…

Wireless Power Harvesting for Cell Phones
Nokia hopes to create a device that could harvest enough power to keep a cell phone topped up.
By Duncan Graham-Rowe

A cell phone that never needs recharging might sound too good to be true, but Nokia says it's developing technology that could draw enough power from ambient radio waves to keep a cell-phone handset topped up.

The Mercury Men - A web based serial


Edward Borman, a lowly government office drone, finds himself trapped, when the deadly Mercury Men seize his office building as a staging ground for their nefarious plot. Aided by a daring aerospace engineer from a mysterious organization known as “The League,” Edward must stop the invaders and their doomsday device, the Gravity Engine.

The Mercury Men marks a modern return of the classic cliffhanger serials. “The web video format seemed the perfect… Continue

We have been up all night, my friends and I, beneath mosque lamps whose brass cupolas are bright as our souls, because like them they were illuminated by the internal glow of electric hearts. And trampling underfoot our native sloth on opulent Persian carpets, we have been discussing right up to the limits of logic and scrawling the paper with demented writing.

Our hearts were filled… Continue

Invisible Eagle - The History of Nazi Occultism
By Alan Baker

"The historian may be rational, but history is not."
- Louis Pauwels and Jacques Bergier

This book is concerned with one of the most controversial notions of the late twentieth century, one that is so bizarre and appalling in its implications that serious historians have consistently dismissed it as the worst kind of nonsense. Put simply, the notion is this:… Continue

"Accordingly, this is not a work of history. But neither is it a work merely of fiction. It is best described as a case of possibilities, of speculative history. It is an attempt to make sense, by means of a radical hypothesis placed within a very broad context, of events… Continue

While Sam Spade is investigating the murder of his partner, he finds himself surrounded by a host of strange characters all after one thing - a statue of a falcon reputed to contain priceless… Continue

THE FUTURE: Disney's House of the Future (Part 2)

THE FUTURE: Disney's House of the Future (Part 1)

This promotional video from Disneyland shows just how far we've come in a little more than 50 years. Disneyland is set to unveil a new 'House of the Future" this May in partnership with Microsoft and… Continue

THE FUTURE: The Astounding World of the Future!

Starting a new Dieselpunk series of "What will the world be like IN THE FUTURE" is the NY Comedy Film Festival's award-winning short, The Astounding World of the Future by Scott Dikkers. Feel free to chip in your own visions of what you thought the world would have been like in the FAR OFF YEAR 2000!

Music of the War Years

This Friday begins the weekend-long remembrance of World War II in historical Cape May, New Jersey. 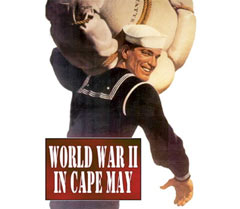 Along with the fairs, tours of the battlements, and demonstrations by WWII veterans, the Inn of Cape May (7 Ocean Street, Cape May, NJ) will be hosting a live show called "Music of the War Years" showcasing the musical styles popular during the second World War.
The show starts at 7:30pm tonite and I'll be attending if anyone is interested in a meet… Continue

Interview Friday is back with freelance artist, Keith Thompson. Keith's work has been featured around the net and in major video games, such as the dieselpunk FPS/RTS Iron Grip from IsoTX.…

When brass meets talent - The US Army Brass Quintet

A clip from the US Army Brass Quintet's performance of Flight of the Bumble Bee, live on Independence Day 2008 at Fair Park in Dallas, Texas.


That would be Harry Watters on the trombone if you're… Continue

The Phillips Machine - A hydraulic-based financial modeling computer, circa 1949

These days, when you attempt to visualize a dynamic model, you punch the figures into a spreadsheet or work flow program and *bing* out comes a floating 3D model of those numbers in real time.

Back in 1949 though, some genius engineers got together and built one of those models using the tools of the time, water pressure, metal, and elbow grease.…