WET ONCE AGAIN!!!  Glory, hallelujah, America is wet once again!

Hail to Senator Blaine, hail to the Blaine Act, and hail to the 21st Amendment!  Volstead is dead, the 18th is dead, and the Fifth is back in hand [image from sidedish.wpengine.com].

For our fans outside the USA it's impossible for us here to overstate just what a collossal mess Prohibition was. …

Kick up your heels, it's time to Shag! It's the Shag, the latest dance craze to sweep the land!

It's a high-kciking, high energy dance perfect for this new "Swing" sound coming out of St. Louis, and it's changing the whole dance scene.

Where it comes from nobody knows for sure.  Some say Jersey, others Carolina.  There's a Carolina Shag and a St. Louis Shag, but tonight…

It's the dance so explicit the Vatican condemned it: the Turkey Trot!

This old Ragtime favorite is hot once again, folks, and the Cabaret is on the scene. One of the many "animal dances" of that era. [image from mentalfloss.com]

An influence for many of today's hottest dances, from the Foxtrot to the Charleston and even the Black Bottom, the…

Shake what you got...we're doing the Shimmy! 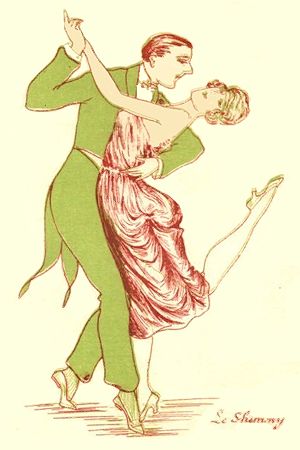 It's the dance so scandalous it's been banned in places, a chest-out shoulder-shaking dance that sets the young folks (and the moral guardians) aflame!

It's the Shimmy, a dance popularized by the great Gilda Grey in her stage acts, where her Shimmy stole the show from her voice!

Would you care to Tango with me, mi amor? I wish to show you this dance of love.  It is hotter than the streets of Buenos Aires and Montevideo from whence it came.  A slow, sensuous dance of passion that knows no equal when it comes to seduction. [image from inthehallofmirrors.typepad.co.uk]

Okay, folks, time put put your hands on your hips and Mess Around.  We're doing the Black Bottom!

It's a dance from Way Back, old as the hills down south, but the great Mr. Perry Bradford from down Jacksonville, Florida, way brought it to the rest of the world.

It's the old Black Bottom dance!

It's peppy, it's simple, it's the foxtrot!  A swell new dance for the new era!

What is the color of sorrow, strife, and striving? Can Music be Blue?  W.C. Handy of Memphis thinks so!

It's a bully new sound, mined from the traditional Negro sounds of the deep south, full of heartache and perserverence. This "Blues" music has a sorrowful, soulful sound built by generations of hard living and finding the simple joys that help you…

Catch the Buzz: it's all about the Baltimore!

Yes, the Cabaret is on its way up the East Coast of America, celebrating the new Dance Crazes that are sweeping the nation, and today we're in beautiful Baltimore, Maryland, where everyone is obviously wild about that new dance from Eubie Blake's famous Broadway show …

What am I talking about, folks?  Why that new dance craze that's sweeping the world: the Charleston! [image from sydneyswingkatz.com.au]

Yes, the product of composers…

What could be better than a nice trip on a fancy steamship or the thrill of flight?  How about both at the same time?  It's the Flying Boat, the miracle of the skies that takes you where no other aircraft...or ship...can! 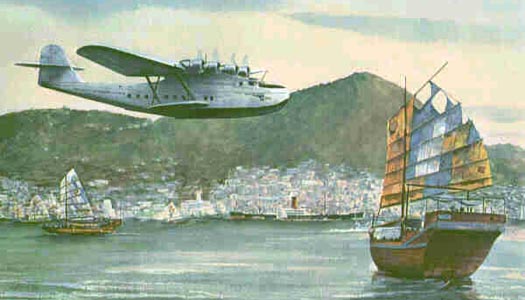 Yes, after the rather unfortunate time I had on the…

Zeppelin Airships...the only way to fly!  With their exquisite comfort, perfectly smooth ride, graceful beauty, and impressive safety record, it seems obvious the days of the passenger airplane are numbered!

And no airship can match the glorious LZ-129 Hindenburg, whose sleek, sublime form (only slightly marred by the ugly Nazi logo that new…

"We must be on you, but cannot see you—but gas is running low," said the famed Aviatrix by wireless on the morning of July 2nd, 1937, in what were among her…

Around the World in Eight Days!  Move over, Magellen, and rethink the future, Verne, 'cause here comes Wiley Post!

Behold, the amazing hand of science!  It's the size of a ship and the weight of a truck.  It's the Graf Zeppelin, a rigid-hulled airship, and it's available for hire! Yes, folks, Hugo Eckner's amazing creation, a silver bullet the size of an ocean liner, the LZ 127 is not just the pinacle of human aeronautics, but the pinacle of flight…

Intercontinental travel has always been the purview of ocean-going ships, but a growing number of bold adventurers is taking to the air in the greatest travel revolution since the steam ship! Ever since Alcock and…

Flight comes into its own with the proliferation of passenger air service!

Yes, the introduction of safe, stable aircraft is spurring a new global industry in passenger service.  The appearance of amazingly large multi-motor civilian airliners such as the Junkers and Ford Tri-motor designs may finally push passenger aviation into the black and allow the common folk to travel by…

Beleive it or not, we're walking on air!  We never thought we could be so free!  Flying away on a wing and a prayer.  Who could it be?

Beleive it or not, it's just today's Cabaret!

Need to catch a plane?  We've found just the way here at the Cabaert. From wing walkers to barnstormers to aerobatic masters, the new and ever-proliferating airplane is…

Raise the banner!  Strike up the band!  Let Democracy blossom here too in this land!     VOTES FOR WOMEN!! I know, "there goes that frothing radical Cap'n Tony again.  Bad enough he thinks Negroes and Orientals and Jews and all are human beings worthy of rights and dignity...now he want to give the vote to…