...and the troubles about the use of it.

During the early thirties, the City of Paris decided to replace the old metallic Pont du Carrousel (Carrousel Bridge), one of the 37 bridges over La Seine, by a new one. The structure of the bridge, built in 1833, was now too low for the constantly increasing navigation over the river.

The construction of the new bridge started in 1935. It was to last till 1939. Although the bridge was made of reinforced concrete, due to the historical environment and in order to blend with it - the Louvre, theTuileries on the right bank, the XVIIe and XVIIIe centuries façades on the left bank - the structure of the new bridge was to be covered with stone. 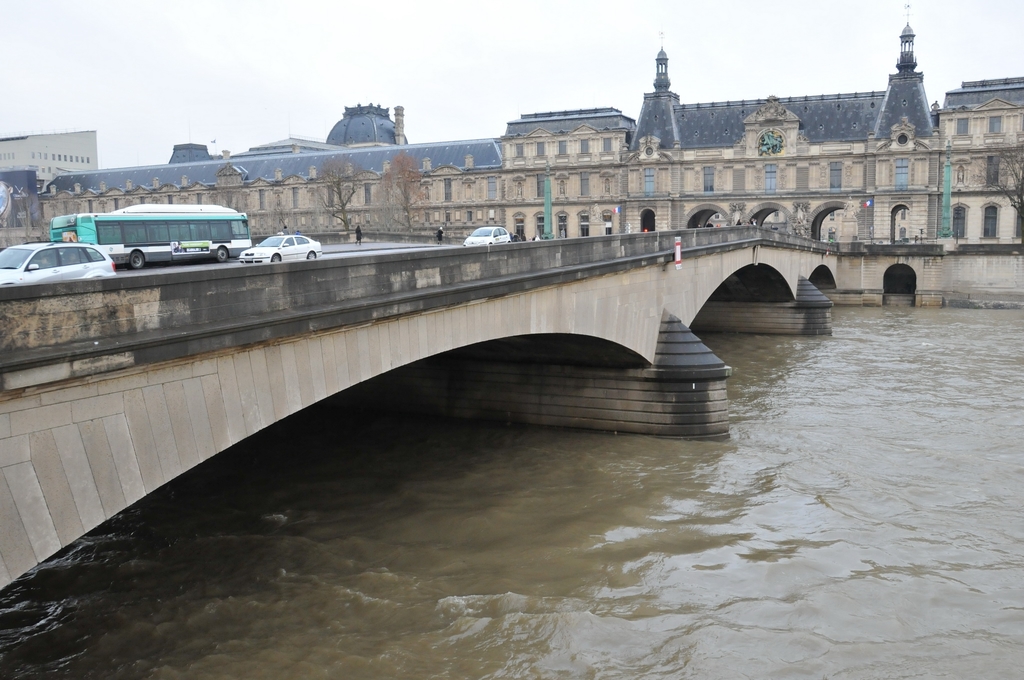 A touch of modernism, though, was welcome. It was decided that the modern, trendy touch will be added up by the light fixtures of the bridge, say a couple of spectacular réverbères placed on both heads of the bridge. Easier said than done. In order not to ruin the perspective of the Louvre, those réverbères could not be higher than 13 meters (42,651 ft) but, in order not to blind the car drivers on both banks, they could not be lower than 20 meters (65,617 ft). The man to take up the challenge, Raymond Subes, a talented French craftsman in wrought iron, was not an unknown artist by any mean. Apart from fabulous pieces of metal furnitures in his usual classy style... 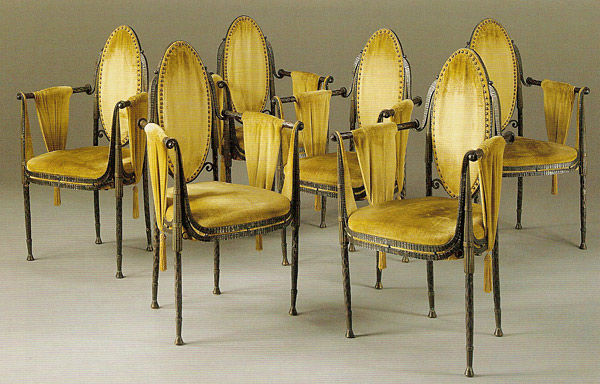 ...Raymond Subes was famous for countless wrought iron achievements in places as prestigious as the Lutetia Hotel, the George V Hotel, the Fouquets' Restaurant, the Banque de France, the Palais de Tokyo in Paris, all the major luxury French ocean liners of the time and many pavilions in World Fairs. Raymond Subes so, designed two pairs of giant metallic candelabras, one for each bank, in the purest, most elegant late Art Deco-forties style: 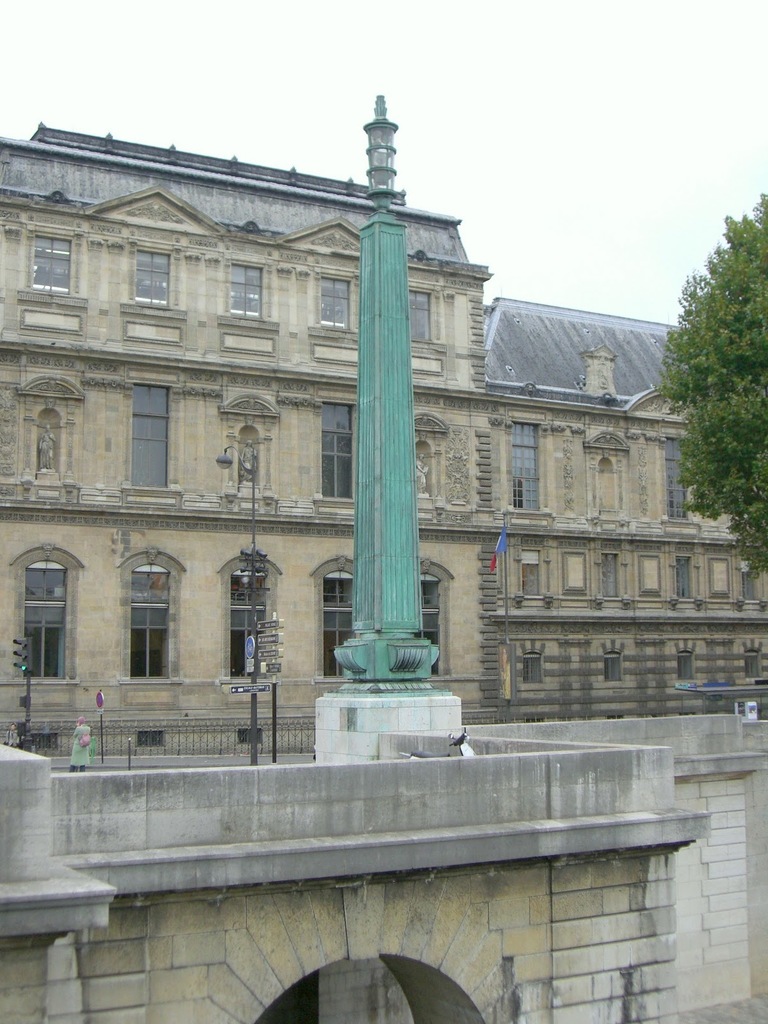 In order to match the above mentionned height requirements, Subes designed these candelabras to be... telescopic. By day, in lower position, the réverbères were 12 meters high (39,370 ft) while by night, the lit up heads of the candelabras were supposed to raise up to 19 meters high (62,336 ft) thank to a chains and cogs mecanism. 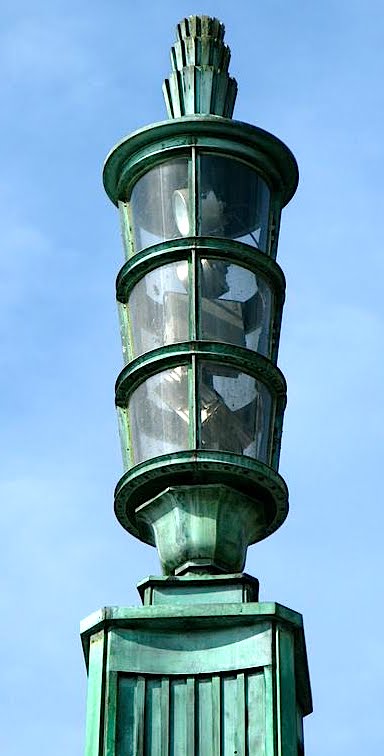 With the coming of WWII, Subes failed to get the necessary amount of iron for his candelabras. So involved in his project he was though, that he did'nt hesitate to steel 45 tons of cast iron and copper from the Germans to complete his réverbères, he kept hiden till the end of the war. It was not before 1946 that the spectacular light fixtures were finally set up on both sides of the bridge. The mecanism, at last, raised up the lit up heads for the first time.

And the last one, too.

The too rudimentary, ill fated mecanism got stuck and the candelabras remained in lower position since then. It is only in 2000 that the City of Paris finally had the four réverbères restored and their mecanism replaced by a new one with cables this time, while their whole structure was reinforced and stabilised for a 6,8 millions euros cost. Most Parisians had no idea about the whole thing, so the third millenary opened for them (and many tourists) with this extra luminous surprise for passers bye, when the night falls and the réverbères are put in motion. 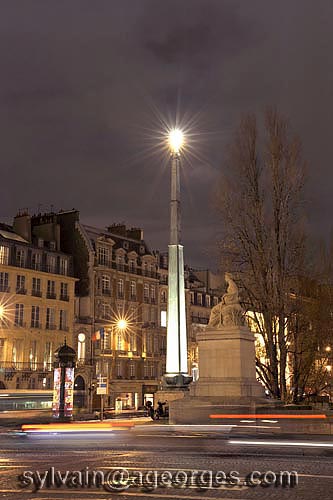 Those who see something typically French in the whole affair - imagination and amazing style but impaired technique and lack of practical sense - may very well... be right, though !

They always reminded me of the Martian Tripod Heat Rays from War of the Worlds.

Glad I wasn't the only one thinking that.

Interesting on the bridge, Stefan, merci!

Some of the Guimard Metropolitain entrance lights were (are) on temp loan to the Smithsonian. Creepy-cool. They always reminded me of the Martian Tripod Heat Rays from War of the Worlds.

D'oh!  Of course I meant Nouveau!  That's what I get for typing on the run.  Time to turn in my art card.

Yes, I was speaking of Guimard's wonderful designs, which didn't weather very well against human abuse or the sweeping force of Paris' fashion sense.

Thanks, Tome. While reffering to the Paris Metro entrances, you most probably think about the so famous glass and metal entrances by Guimard: 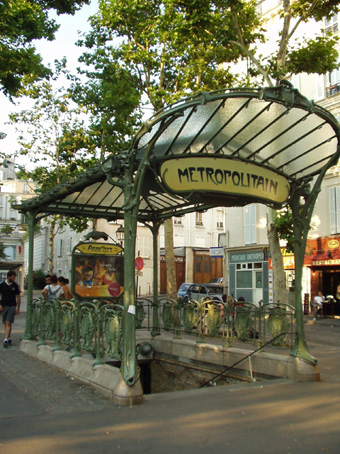 So, I guess you meant Art Nouveau and not Art Deco. The Paris Metro has been built around 1900, so the pre-Art Deco (and pre-Dieselpunk) ornementation in it mostly belongs to the Art Nouveau style, a style it heavily shows the characteristics of, everywhere they were preserved, that is.

However, you're partly wrong only. The Paris Metro has not always been been one single national company. It was, at first, two different private companies, the CMP (Compagnie du Métro Parisien) and the Compagnie du Nord-Sud (North-South Company), who were to be united later. Although both companies were roughly launched at the same time, for a variety of reasons both economic and politic, the Compagnie du Nord-Sud had part of its stations and lines extended and/or re-designed after WWI, during the 20's and the 30's.

So, while the CMP stuck to its trade-mark, the intricated style of Hector Guimard cast iron designs (also called Style Nouille - Noodle Style) the Compagnie du Nord-Sud was to develop a more geometrical, simplified ornemenation for the stations entrances and interior decoration, that historically and aesthetically qualifies as Art Deco, although more in a "stylized Louis XVI" genre fashionable at the time, than in the most daring and innovative aspects of Art Deco: 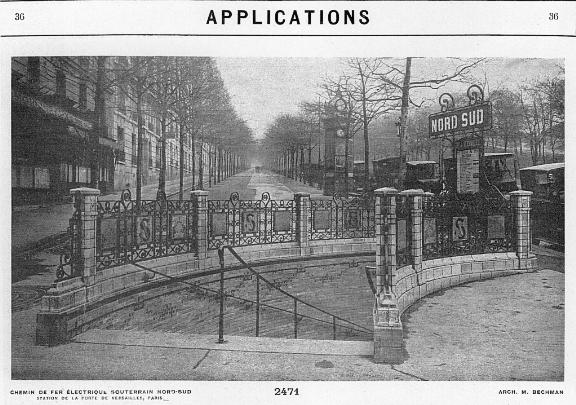 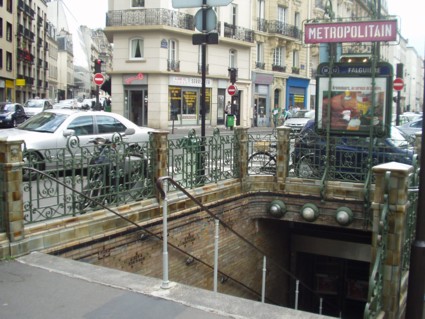 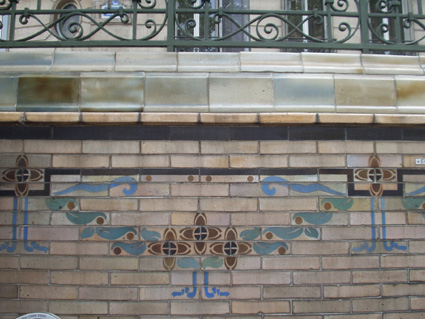 Both ornementation still coexist today, with a predominance of the Guimard style though and again, only to the extend of what has been preserved of both original designs. 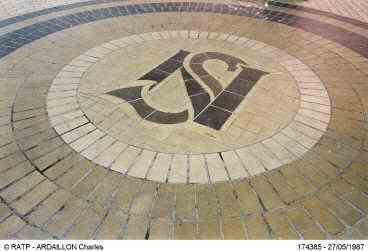 For example, I love the Art Deco Nouveau entrances to the Metro, but the use of glass made many of them too fragile to survive.  Plus, there's always the phrase "this is why we can't have nice things" that applies when you add people to the equation.