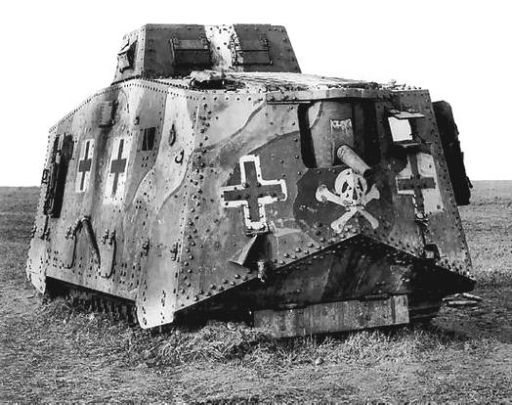 The project to design and build the first German tank was placed under the direction of Joseph Vollmer, a Reserve Captain and engineer. It was to mass around 30 tons, be capable of crossing ditches up to 1.5 meters wide, have armaments including cannon at front and rear as well as several machine-guns, and reach a top speed of at least 12 km/h. The running gear was based on the Holt tractor, parts for which were obtained from the Austrian arm of the Holt-Caterpillar Company. After initial plans were shared with the Army in December 1917 the design was extended to be a universal chassis which could be used as a base for both a tank and unarmoured Überlandwagen ("Over-land vehicle") cargo carriers. 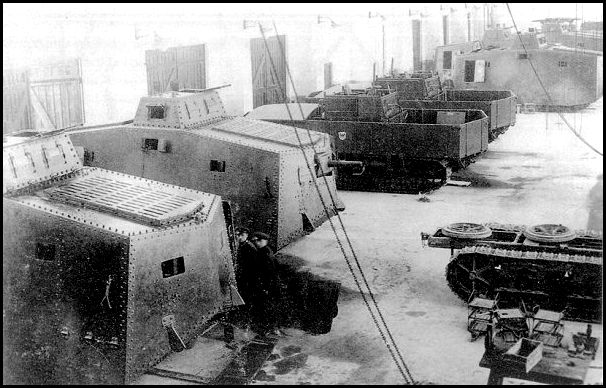 The first prototype was completed by Daimler-Motoren-Gesellschaft at Berlin-Marienfelde and tested on 30 April 1917. A wooden mockup of a final version was completed in May 1917 and demonstrated in Mainz with 10 tons of ballast to simulate armor. During final design the rear-facing canon was removed and the number of machine-guns was increased to six. The first pre-production A7V was produced in September 1917, followed by the first production model in October 1917. The tanks were given to Assault Tank Units 1 and 2, founded on 20 September 1917, each with five officers and 109 NCOs and soldiers.

The tank's name was derived from that of its parent organization, - 7. Abteilung, Verkehrswesen. In German the tank was called Sturmpanzer-Kraftwagen (roughly "assault armoured motor vehicle"). 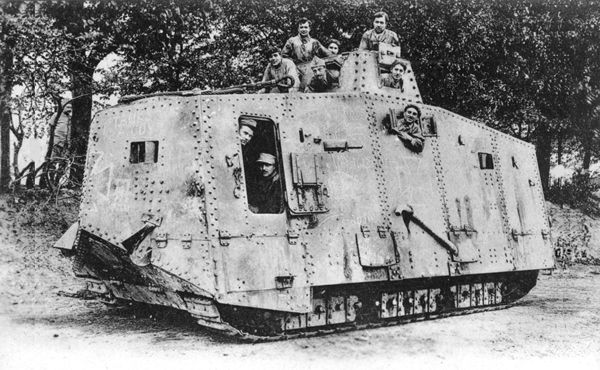 The A7V was 7.34 metres (24.1 ft) long, 3 metres (9.8 ft) wide, and the maximum height was 3.3 metres (11 ft). The tank had 20 mm of steel plate at the sides and 30 mm at the front; however the steel was not hardened armour plate, which reduced its effectiveness. It was thick enough to stop machine gun and rifle fire, but not larger calibres. This offered protection comparable to the thinner armour of other tanks of the period, which used hardened steel. 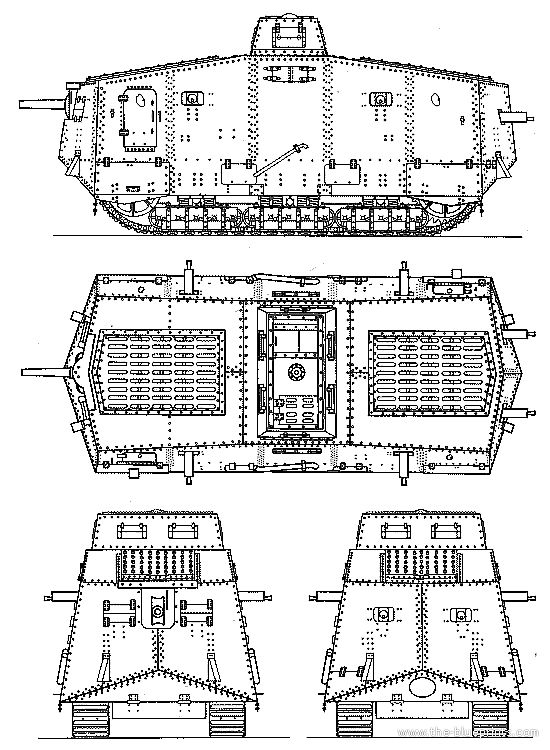 The A7V was armed with six 7.9 mm MG08/15 machine guns and a 5.7 cm Cockerill-Nordenfelt fortification gun mounted at the front. Between forty and sixty cartridge-belts, each of 250 rounds, were carried as well as 180 shells for the main gun, split 90:54:36 between canister, antitank, and explosive. These were the official figures, up to 300 rounds for the main gun were actually stowed.

The "female" variant had two more machine guns in place of the main gun. It is not entirely clear how many started this way or were converted. Some sources say only chassis number 501 saw combat as a female. 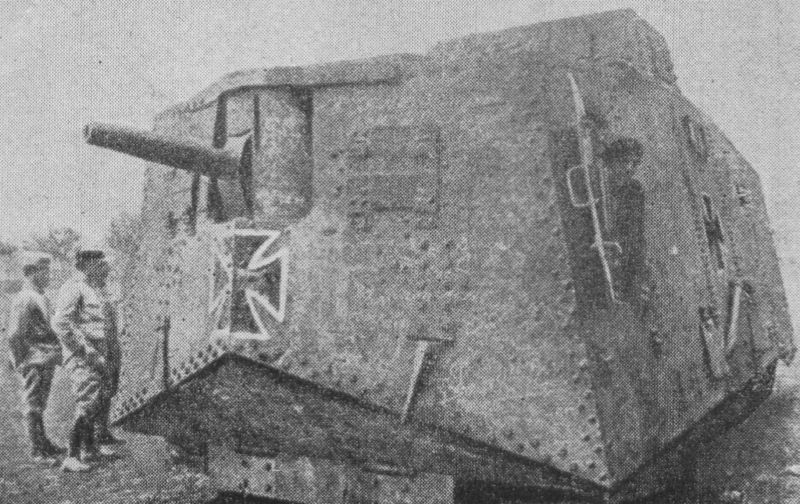 Compared to other World War I tanks the road-speed was quite high, but the tank had very poor off-road capability and was prone to getting stuck. The large overhang at the front and the low ground clearance meant trenches or very muddy areas were impassable. This was worsened by the fact that the driver could not see the terrain directly in front of the tank, due to a blind spot of about 10 metres. However, on open terrain it could be used to some success and offered more firepower than the armoured cars that were available. Power to weight ratio was 6.8 hp/ton (5.1 kW/ton), trench crossing: 7 feet (2.1 m), ground clearance: 7.5 to 15.75 inches (190 to 400 mm). 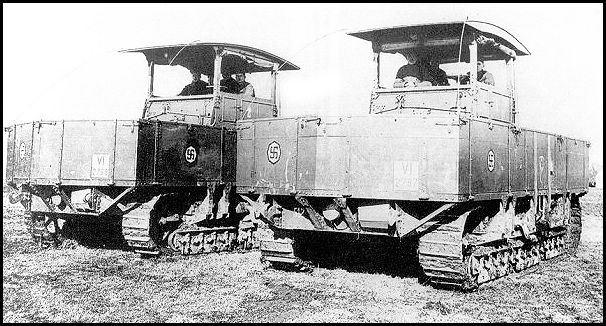 Thirty chassis were assigned for completion as Überlandwagen supply carriers, but not all were completed before the end of the war. The design of the A7V featured on the Tank Badge of 1921, awarded to commemorate service in the German Panzer forces of 1918.

The A7V was first used in combat on 21 March 1918. Five tanks under the command of Hauptmann Greiff were deployed north of the St. Quentin Canal. Three of the A7Vs suffered mechanical failures before they entered combat, but the remaining pair helped stop a minor British breakthrough in the area, but otherwise saw little combat that day. The first tank against tank combat in history took place on the 24 April 1918 when three A7Vs (including chassis number 561, known as "Nixe") taking part in an attack with infantry incidentally met three Mark IVs (two Female machine gun-armed tanks and one Male with two 6-pounder guns) near Villers-Bretonneux. During the battle tanks on both sides were damaged. According to the lead tank commander, 2nd Lt Frank Mitchell, the Female Mk IVs fell back after being damaged by armour piercing bullets. They were unable to damage the A7Vs with their own machine guns. Mitchell then attacked the lead German tank, commanded by 2nd Lt Wilhelm Biltz, with the 6 pounders of his own tank and knocked it out. He hit it three times, and killed five of the crew when they bailed out. He then went on to rout some infantry with case shot. The two remaining A7Vs in turn withdrew. As Lt. Mitchell's tank withdrew from action, seven Whippet tanks also engaged the infantry. Four of these were knocked out in the battle, and it is unclear if any of them engaged the retreating German tanks. Lt. Mitchell's tank lost a track towards the end of the battle from a mortar shell and was abandoned. The damaged A7V was later recovered by German forces. 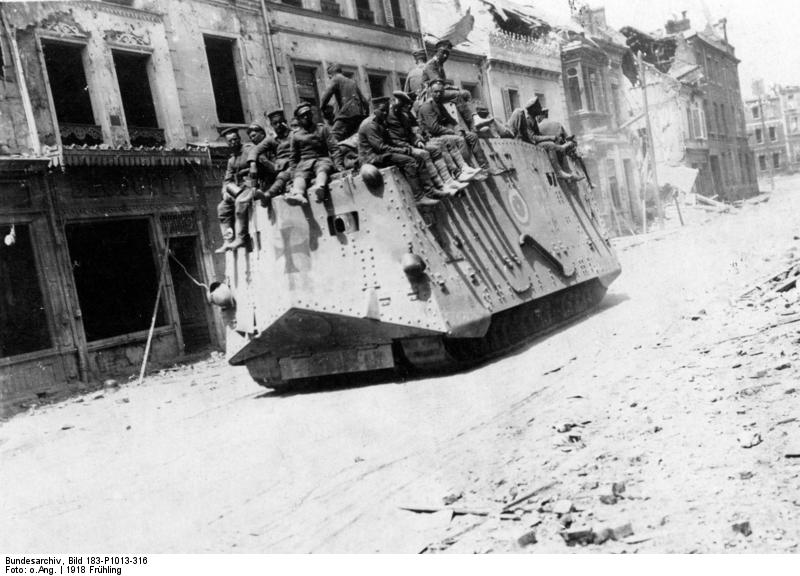 All 18 available A7Vs had been put into action that day with limited results; two toppled over into holes, some encountered engine or armament troubles. After a counterattack, three ended up in Allied hands. 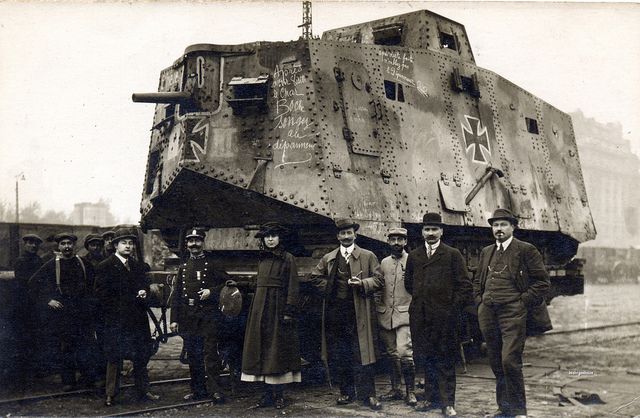 One was unusable and scrapped, one used for shell testing by the French (see above), and the third captured by the Australians (see below). 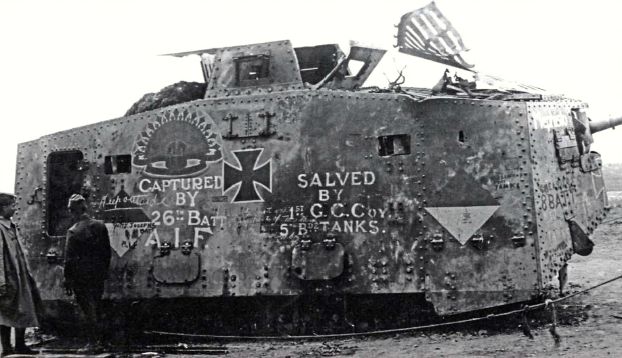 The A7V was not considered a success and other designs were planned by Germany, however the end of the war meant none of the other tanks in development, or planned ones, would be finished (such as the Oberschlesien, K-Wagen, LK I or LK II). There was a plan of building an improved A7V, the A7VU, resembling a British tank but with the Holt suspension, and an anti-aircraft carriage armed with two 77mm guns:

The final use in WWI of A7Vs was in October 1918; a number were scrapped before the war ended in November. The extremely limited production of twenty made a very limited contribution, and most of the tanks (less than a hundred in total) that were fielded in action by Germany in World War I were captured British Mark IV tanks (Beutepanzer). In contrast, the French had produced over 3,600 of their light FT-17, the most produced tank of World War I, and the British over 2,500 of their heavy Mark I to V tanks.

Two lightly armoured vehicles broadly resembling the A7V, one of which was named "Hedi", were used by a Freikorps tank unit to quell civil unrest in Berlin in 1919, and were constructed after the war, using the chassis from Überlandwagens and armed with four MG08/15 machine guns. 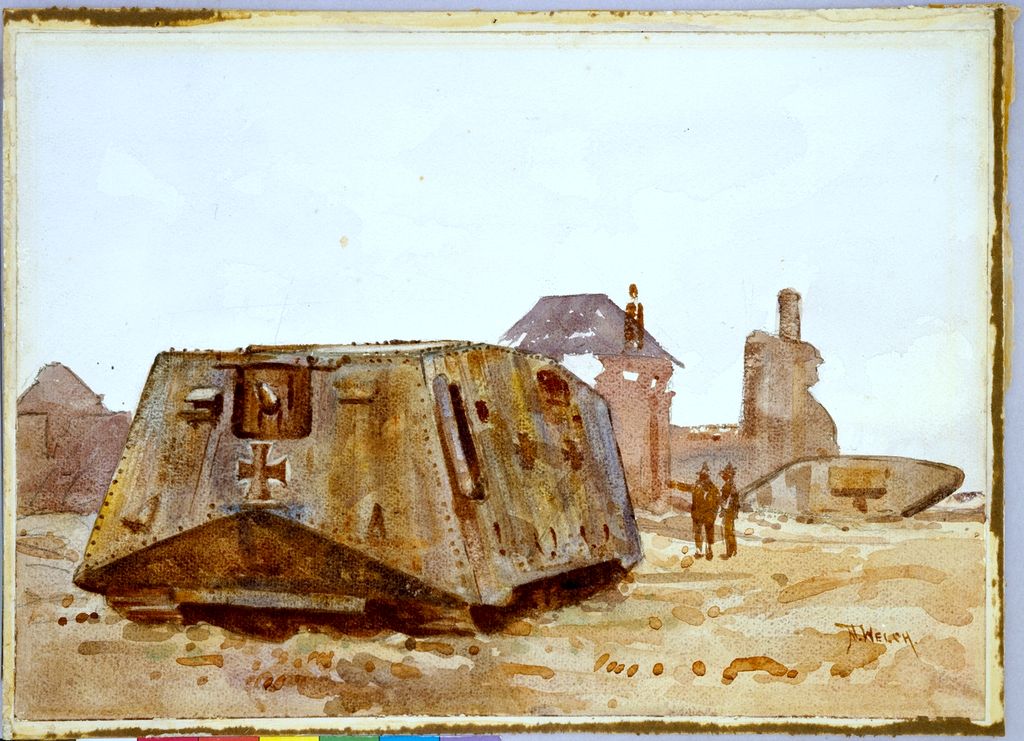 Some sources claim that several A7Vs were captured by (or given to) Polish forces after uprising in Greater Poland. However this information is incorrect, since all of A7Vs were either destroyed or captured during World War I. The possible source of this misunderstanding are armoured draisines captured from Germans and used by insurgents which are very similar to A7Vs (overall hull shape, machine guns on the sides etc., but with turret). 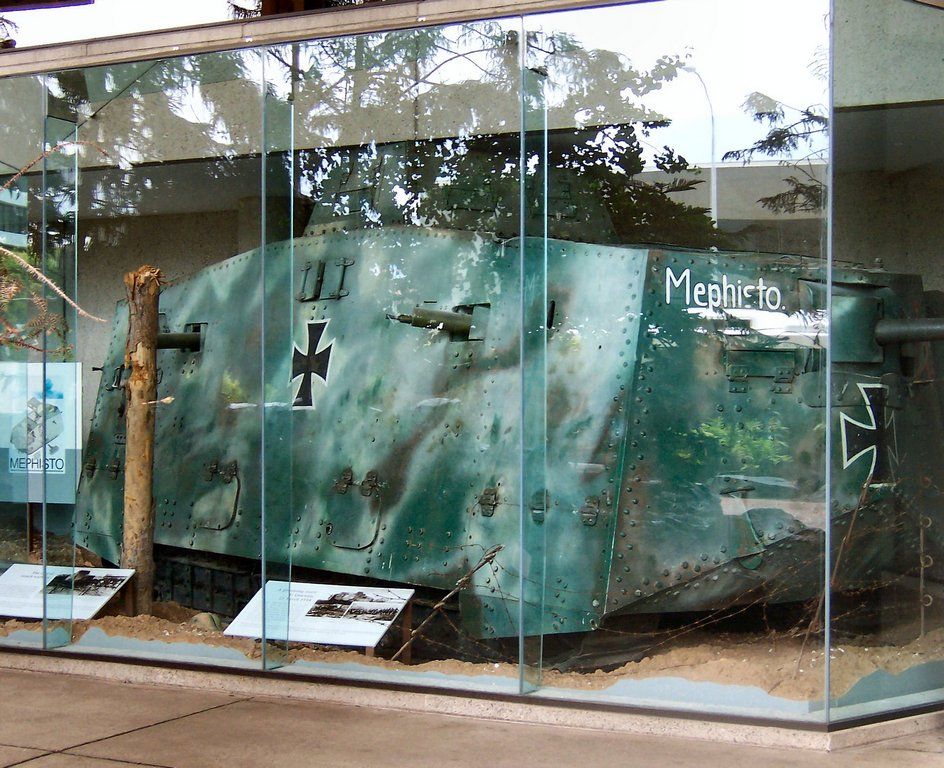 The captured A7V Mephisto is in the Queensland Museum in Brisbane, Australia. It is the only surviving A7V out of the 21 produced. One cannon from an A7V (possibly 504 Schnuck) is at the Imperial War Museum North in Manchester. 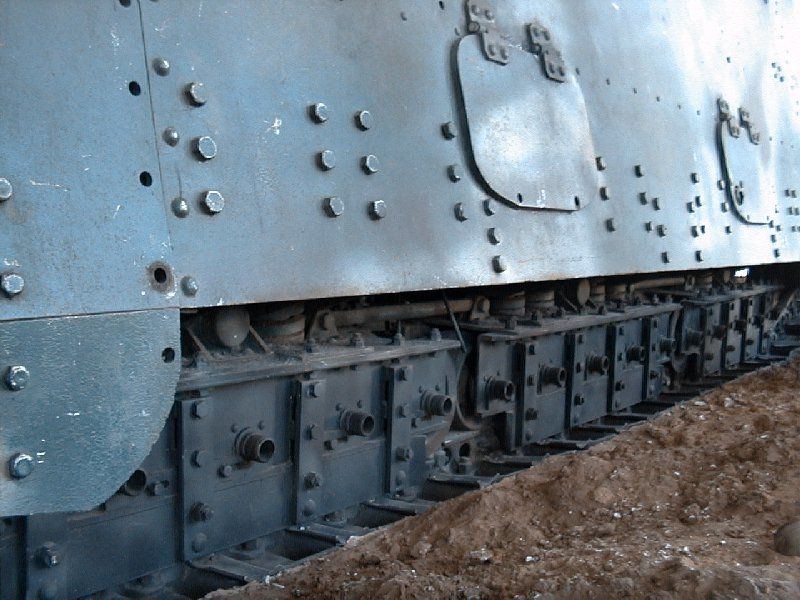 Two full-size replicas have been constructed. One, Wotan, is in the Deutsches Panzermuseum in Munster. The second is a running replica built for the British Tank Museum, named Schnuck. It was constructed in the UK of plywood and angle iron using the engine, transmission and tracks from two Fordson County Crawlers - tracked agricultural vehicles. 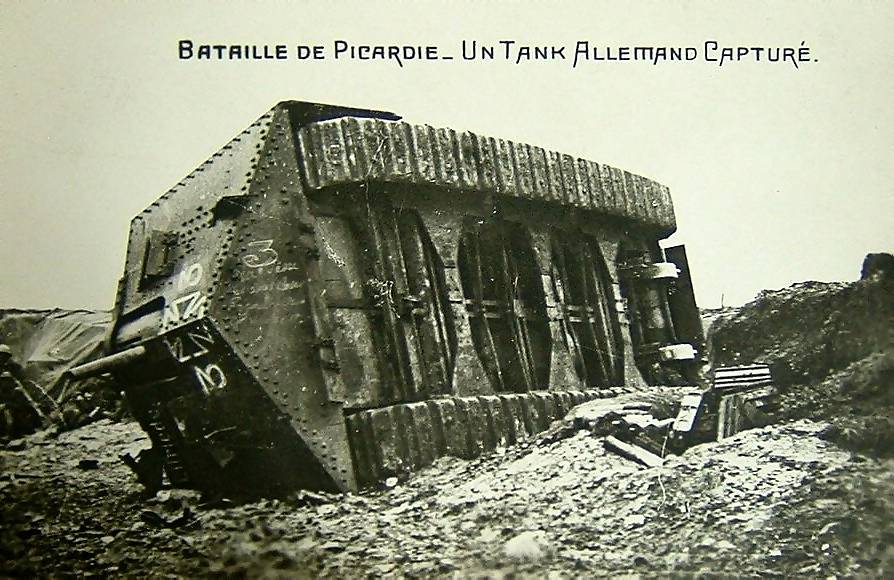 More pictures in the A7V album.