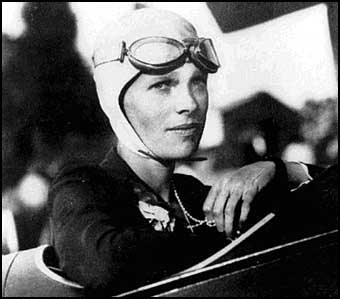 The final resting place of famed aviator Amelia Earhart has long been searched for and disputed, and now (conveniently just in time for the Earhart biopic that opened last weekend), Richard Gillespie, author and executive of The International Group for Historic Aircraft Recovery (TIGHAR) believes there is enough evidence to suggest that Earhart may have crash landed on a tiny coral atoll, Nikumaroro, in the island nation of Kiribati, some 300 miles southeast of Earhart's target destination, Howland Island.

"Propagation analysis of nearly 200 radio signals heard for several days after the disappearance make it virtually indisputable that the airplane was on land," Gillespie said.

Eventually, Earhart's twin-engine plane, the Electra, was ripped apart by Nikumaroro's strong waves and swept out into deep water, leaving no visible trace.

"The evidence is plentiful -- but not conclusive yet -- to support the hypothesis that Amelia landed and died on the island of Nikumaroro," forensic anthropologist Karen Ramey Burns told Discovery News.

The author of a book on Earhart, Burns believes that the strongest of the amassed evidence comes from the report related to the partial skeleton found by Gallagher.

"The skeleton was found to be consistent in appearance with females of European descent in the United States today, and the stature was consistent with that of Amelia Earhart," said Burns.

According to Burns, another piece of documentary evidence comes from the accounts of Lt. John O. Lambrecht, a U.S. Naval aviator participating in the search for Earhart's plane. Lambrecht reported "signs of recent habitation" on what was an officially uninhabited atoll.