Wherever the spot of light was, the bullet would strike.

During the 1930s and early 1940s pistol and rifle lights were born to little notoriety or commercial success.

In March, 1932 Modern Mechanix magazine wrote about a pistol mounted flashlight from a Chicago inventor. The light was mounted on the pistol along the sight axis, with the lens terminating just before the front blade site. It was said to be effective out to 250 feet, projecting a "baseball sized" circle of light on the target.

According to the magazine, operation was simply carried out by a thumb switch which engaged the batteries and illiminated the target. It is unclear whether this concept actually saw it to market, or to police use. 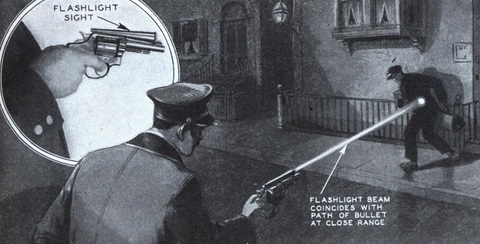 Another aiming light did however did gain a little traction, but is also unclear what kind of fame it achieved.

The Owl was a 1940 invention designed for mounting to police service revolvers. Built for the Colt Police Positive revolver in .38 caliber, The Owl was more modern in connection the weapon. Today's pistol lights, for the most part, mount on the pistol frame beneath the barrel.

The Owl underneath the barrel of the revolver was said to project a beam of light out 63 feet. Also different from other weapons aiming lights of the era, The Owl "Lite Site" project a dot at the center of the area illuminated by the flashlight, further honing accuracy.

The more things change, the more they stay the same.

Huh. TBH, I don't think I've ever heard of something "so ahead of its time that people weren't ready for it"...though if that's happened here, I bet it's happened elsewhere...

Thinking back to that time, I would imagine a number of factors. Most importantly would have been the battery. I suspect a battery small enough for a handgun didn't carry much charge and the light may not have have lived up to its promise. But then again, maybe it was just so far ahead of it's time people weren't ready for it.

Very interesting, Jake. Thanks for posting this.

When someone today is hit with a bright red spot from a LASER on their chest, they usually give up immediately. It doesn't require a huge amount of logic to figure what is about to follow. This eliminates the need for bullets.(NOT!)