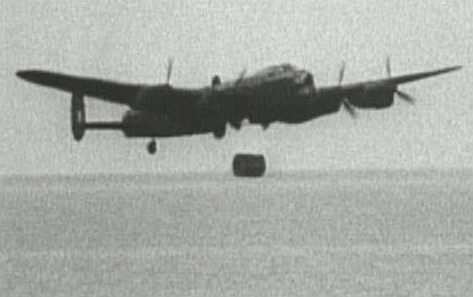 But how to destroy massive dams? UK aeronautical engineer Barnes Wallis had an idea, bouncing bombs that would skip over river defenses, sink to the dam base and then explode, hopefully destroying the massive structure.

Wallis came up with the spinning cylinder bombs, essentially a depth charge designed for use against a land-based target. Resembling a barrel, the bomb was filled with 6,600 of high explosive and slung beneath the belly of a RAF Lancaster bomber.

Instead of dropping the bomb from a higher altitude, aiming for the dam and running the risk of missing your one shot, RAF crews devised an attack that worked in tandem with the design of the bomb.

The RAF Lancaster's would fly nap of the Earth towards the German dams and release their bouncing bombs on the resevoir side of the dam at about 500 yards. The barrel-like bomb, set into a back spin upon release, would then ricochet off the surface of the water at about 200 miles per hour. The friction with the water would cause deceleration that would lead to the bomb sinking to the bottom of the resevoir, ideally against the wall of the dam.

Like a depth charge, the 6,000 pounds of explosive filler would detonate as it reached a specified depth. The explosive would vaporize the filler, creating a dense packed explosion under the pressure of the surrounding water. The water surrounding the bubble would turn to steam and expand, then retract created by the explosive bubble pulse. The shock wave would also pulse outwards, adding to the potential damage. In mid-May 1943 the RAF set its sights on the Mohne, Eder, Sopre and Ennepe river dams. Only two would be breached. Three barrel bombs would strike the Mohne, breaching it. The Eder dam took two direct hits, a third striking high rendering it ineffective, destroying it as well. The pair of other dams, Sorpe and Ennepe were hit with single bombs each, doing no damage.

However, as with any effort to bring a fist down on a enemy, there were human costs. Of the eight RAF Lancasters shot down during the raid, 53 crew members were killed. And as the dams were breached and released a combined 350 million tons of water, 1,294 people were killed down river. A number of those killed, somewhere between 600 and 750 depending on the source, were foreign POWs.

Next week we'll profile some of the most potent air dropped munitions to come from Wallis, the Earthquake Bombs.

Operation Chastise was a proper 'Boy's Own' style venture which if it wasn't a true story, you just wouldn't credit it. The leader of 617 Sqn RAF, Wing Commander Guy Gibson was awarded his Victoria Cross (see copy of citation below) for the mission. But the raid was for him just one chapter in a very full life. He was only 24 when he led the raid.

The KING has been graciously pleased to confer the VICTORIA CROSS on the undermentioned officer in recognition of most conspicuous bravery: —

This officer served as a night bomber pilot at the beginning of the war and quickly established a reputation as an outstanding operational pilot. In addition to taking the fullest possible share in all normal operations, he made single-handed attacks during his "rest" nights on such highly defended objectives as the German battleship Tirpitz, then completing in Wilhelmshaven.

When his tour of operational duty was concluded, he asked for a further operational posting and went to a night-fighter unit instead of being posted for instructional duties. In the course of his second operational tour, he destroyed at least three enemy bombers and contributed much to the raising and development of new night-fighter formations.

After a short period in a training unit, he again volunteered for operational duties and returned to night bombers. Both as an operational pilot and as leader of his squadron, he achieved outstandingly successful results and his personal courage knew no bounds. Berlin, Cologne, Danzig, Gdynia, Genoa, Le Creusot, Milan, Nuremberg and Stuttgart were among the targets he attacked by day and by night.

On the conclusion of his third operational tour, Wing Commander Gibson pressed strongly to be allowed to remain on operations and he was selected to command a squadron then forming for special tasks. Under his inspiring leadership, this squadron has now executed one of the most devastating attacks of the war—the breaching of the Moehne and Eder dams.

The task was fraught with danger and difficulty. Wing Commander Gibson personally made the initial attack on the Moehne dam. Descending to within a few feet of the water and taking the full brunt of the antiaircraft defences, he delivered his attack with great accuracy. Afterwards he circled very low for 30 minutes, drawing the enemy fire on himself in order to leave as free a run as possible to the following aircraft which were attacking the dam in turn.

Wing Commander Gibson then led the remainder of his force to the Eder dam where, with complete disregard for his own safety, he repeated his tactics and once more drew on himself the enemy fire so that the attack could be successfully developed.

Wing Commander Gibson has completed over 170 sorties, involving more than 600 hours operational flying. Throughout his operational career, prolonged exceptionally at his own request, he has shown leadership, determination and valour of the highest order.

A fair observation and comment. Some of the victims were from a forced labor camp, as well as civilians in a nearby community, and their deaths were a horrible and unfortunate by-product of the need to destroy Nazi Germany's industrial heart. Will edit and ensure that toll is not overlooked.

Fascinating. But perhaps it merits mentioning somewhere alongside the discussion of the marvelous engineering of these devices that the resultant flooding from the attacks killed more than a thousand people - most of them not members of the military, most, in fact, forced labor. Obviously, we're talking about the era of Total War and the attacks also disrupted the military industrial production of an unambiguously evil regime. Still, a weapon designed to destroy a civilian target at the very least should provoke a little soul-searching.