The M-1 Carbine was a mainstay in American armories through World War II and into the 1950s. The .30 caliber round, not quite a pistol caliber and definitely not a rifle, provided U.S. troops a light, easy to handle and reliable magazine fed weapon. Its designer, David Williams, is considered the father of the light carbine. Elements such as the short stroke piston were developed by Williams while he served sentence in a North Carolina prison on murder charges.

Williams firearms-based rehabilitation led to his early release, yet the master machinist with an eye for firearms innovation had another idea as America entered World War II. A light, simple high rate of fire belt-fed machine gun would spring from his mind. It would be developed and tested, but never fielded.

Williams designed a simple, direct blow-back fully automatic weapon chambered in a non-standard combat caliber of .22LR (Long Rifle.) Direct blow-back means forward expanding ammunition propellant gases push the case backwards against the bolt, allowing it to move back and cycle in a new round.

This small caliber machine gun from Williams was fed from a belt of .22LR ammunition, an unusual proposed combat caliber for an Army utilizing .30-06 in all of its medium machine-guns, automatic and semi-automatic rifles.

Why Williams chose to create the weapon in .22LR is unknown, but its salient points were the ammunition's compact size, cheap manufacturing cost and all around well earned reputation. The tiny round wasn't designed to kill an enemy with a single strike coming from Williams weapon, instead it was apparently imagined as a swarm of lead meeting a wave of enemies on the battlefield. 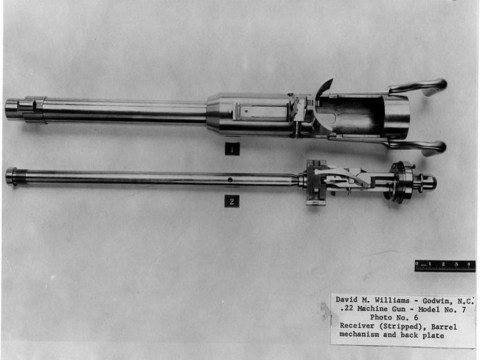 
With the .22LR, coming from a heavy barrel, the rate of fire for Williams would-be human wave destroyer was estimated at between 2,000 and 3,000 rounds per minute. And at just over 24 inches long, the weapon was relatively small. But its complete steel construction and heavy components reportedly made it too heavy for a weapon that size and caliber. The caliber, historically, was viewed as a training round and not suited for battle.

The belt fed machine gun, using the canvas belt standard of the time, was designed to be mounted on the standard Browning machine-gun tripod. Interestingly, the size of the Williams machine-gun spawned an even smaller weapon. Known as the Model T, the carbine sized weapon (still utilizing the belted .22LR) was to have a pistol grip and telescoping stock. The Model T automatic carbine never made it out of mock-up.

Williams demonstrated the belt fed machine gun to Army officials at Fort Benning, but never captured military interest in the gun. Looking at the museum piece that is become, the simple layout and silhouette show a smart design, with easy break down and maintenance.

Comment by Twizard on January 8, 2011 at 3:51am
There was a movie about Williams starring Jimmy Stewart out there.   I saw it when I was a boy