Raise your glass, everyone around the world, it's the Cabaret Centenial Celebration!!! 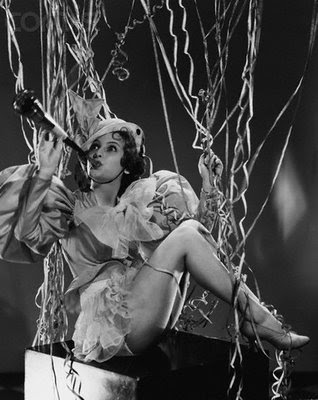 Yes, it's the greatest moment in Entertainment History, a gala celebration that dozens the world over have been eagerly anticipating for the last 99-odd weeks.  It's the official 100th Episode of the Cap'n's Cabaret, your home for Diesel Era Music, Cocktails, Pop Culture, Cocktails, History, Cocktails, Dance, and of course Cocktails.  [image from thewackytacky.blogspot.com]

Thanks to you, my loyal viewers and occasional people who accidentally clicked the link while trying to view Lord K's Garage, the Cabaret is dedicating this "100 Episodes in Review" with a sampler of the music and drinks from the first 99 plus a full list of the music and drinks with links, making this episode also a handy Index Link as well.

So, it's been a long, strange trip up and down the Diesel Era, from the earliest phonographic roots of the Diesel Age music through the World Wars and the Interbellum highs of the 1920s and lows of the 1930s to an atomic blast in the transitional 1950s and early 60s.

It all started way back in August of 2011 with a simple idea: bring the Dieselpunk community a viewer into the culture of the past, it's high points and low, the good, bad, and ugly, such that we can use the Sankofa principle to make something new and relevant to our postmodern world.

Ah, those early days, when the Cabaret, newly birthed into the Virtual World, was still trying to find it's footing.  Our first 10 episodes traced a meandering path, found a narative, and travelled the world.  We began with an apertif of Negroni and Django, two great compilations of great things that were beyond the sum of their parts.  We had Manhattan Cocktails with Cole Porter in NYC, then a Sazerac in New Orleans, then an Old Fashioned in a Delta Juke Joint with Robert Johnson.  From there hard times on a depression-era boxcar ride through the dust bowl faking a Gimlet with Woody Guthrie which dropepd us off in a dusty little Nevada town called Las Vegas where we shared Whisky Sours and Roy Acuff music with my new Agent, the great Benjamin "Bugsy" Siegel.  Siegel then took us to a Hollywood Spectacular with Busby Berkely and a Brown Derby Cocktail.  From there it was Mojitos in Havana with Son music, a flight down to Rio in a Pan Am Clipper with a triple feature of music and a Caipirinha Cocktail, and finally a Zepplin trip to the wild Cabarets of Weimar-era Berlin with a nice Sidecar cocktail.  Quite a nice start.  Here's a sampler:

Shake over Ice, serve in an Old Fashoined glass with a twist of orange peel.

Ep. 2: Anything Goes.  Cole Porter and the Manhattan Cocktail.

Ep. 3: The Big Easy. Louie Armstrong and the Sazerac.

Ep. 9: Flying Down to Rio. Triple Feature of sounds and sights of Brazil and the Caipirinha

Our next 10 found us catching our stride, but soon running for our lives. Times were grand, but trouble was looming and soon war was upon us!  We began our journey in Paris with the beautiful Josephine Baker and a nice French 75. Yet almost immediately we were fleeing south with Edith Piaf to a rough casbah in Casablanca for a Jack Rose Cocktail. We made it out into free London for a Cafe de Paris cocktail with Nat Gonella then double cocktails for Christmas on the Yankee Clipper as we made our way back to the USA. We had a new years' celebration in Washington, DC, with Duke Ellington and a Champaign Cocktail and then stomped the Atlantic City Boardwalk with Tommy Dorsey and three Pink Ladies, all courtesy of Mr. Siegel's friend "Nucky" Johnson. Our beach trip continued with a visit to Miami Beach for Daquiris with Don Azpiazu and then on to the musical Mecca of Memphis for a triple musical jam with a Sloe Gin Fizz before ending up in Chicago for a drum-fueled bash with a brandy Smash!

Stir over ice, strain into a Cocktail glass, garnish with a lemon twist.

Ep. 17: Stompin' on the Boardwalk. Tommy Dorsey and three versions of the Pink Lady.

Our youthful 20s were a carefree and crazy time for the Cabaret, though war ravaged much of the world. We started out in Kansas City with Count Basie and then down to Waco for some Texas Swing and Tequilla Sunrises.  We got a little bit temporally lost and ended up in St. Louis during Prohibition for a bit of Bix and a riverboat cruise. We must've drank more of those "Mississippi Orange Juices" than we thought, because we soon woke up in New Orleans with Louis Prima, Huey Long, and a few gaps in our memory. Then our 25th aniversary special took us to Harlem in its heyday with Cab Calloway, Chick Web, and twin cocktails. Next to Newark, New Jersey for a radio broadcast with Frank Sinatra (he was so cute in his youth!) then all the way across the US to San Fransisco for a Zombie at Don the Beachcomer's.  Next we took the China Clipper with Groucho Marx and Lucky Lindy to Hawaii, then on to Shanghai for a last bash in China!

Mix in a tall barglass in the order given; add crushed ice, not too fine as lumps are needed to whip up the froth on the egg white and cream. Use a long metal shaker and remember this is one drink that needs a long, steady shaking. Keep at it until the mixture gets body — “ropy” as some experienced barkeepers express it. When thoroughly shaken, strain into a tall thin glass for serving. [from New Olreans DRINKS and how to mix ‘em by Stanley Clisby Arthur. HARMANSON, Publisher 333 rue Royale, Nouvelle Orleans; 1937]

*Disclaimer: raw egg white can occasionally carry foodborne illness, so if you're not up to the task, take a pass, Jack!

Ep. 22: Cowboys and Playboys. Bob Willis and the Texas Playboys and a Tequilla Sunrise.

Ep. 24: Waking Up in N'awlins (What the Hell Happened?). Louis Prima and the Ramos Gin Fizz.  Bonus: meet Huey Long!

Then we entered our 30s and started to grow up and get serious, ending up the "guest" of some of history's ugliest dictators and then fleeing across South America as war tore apart Europe and treatened to drag in the USA. First to war-threatened Singapore, hubristic in its "invincibility" and then on to beautiful Beiruit.  From there we entered the Clandestine Service and helped spy on Mussolini only to end up the "guest" of Joe Stalin and then Hitler himself!  A harrowing escape brought us first to neutral but Fascist Spain only to set up a rambling flight across South America in an attempt to make it back to the good ol' US of A.  Yet by the time we got home, War had reached even the great sleeping giant. Shake very well over ice (to foam the egg white) and strain into an Old Fashioned glass. Garnish with a lime or lemon wedge.

Ep. 32: Livin' it Up in the Levant. Avo Uvezian and the Deauville Cocktail.

Ep. 34: Swingers of the World Unite! Leonid Utyosov and the (anachronistic) Soviet Cocktail. Bonus: unlock the Secret Code for a hidden message!!

Ep. 35: I Did Nazi zis Comming! Charlie and his Orchestra (Nazi Jazz?!?!?) and the Embasy Cocktail. Bonus: meet the slimy Goebbels, the Swingjungen underground jazz fans, the heroic Albert Goering, and help the Cabaret save a few lives.

Ep. 36: Interludio Español. Flamenco music and dance and a Zurracapote.

Ep. 37: Montevideo Thrills to Classic Guitar. The incomparable Andres Segovia and a Clericó.

Ep. 40: The Cabaret Goes to War! Glenn Miller and the Allies Cocktail. Bonus: the beginning of the WW2 series!

Our 40s were a time of war. We visited all the fronts, land, sea, and air, and heard the music that helped get us all through the horrible times.  But older and wiser, we worked to ensure that the suffering of the citizens of all sides and the horrors of the war were highlighted, rather than the typical glorification.  It was a brutal time. but we did what we could to get through.

Shake well over ice, strain into a cocktail glass, garnish with an orange wheel.

Ep. 42: Praise the Lord and Pass the Ammunition. The Merry Macs and the Paradise Cocktail.

Ep. 43: On the Rocks in the Magreb. The Andrews Sisters and the Dubonnet (or Zaza) Cocktail.

Ep. 46: The Home Front. The Four Vagabonds, Spike Jones, the Three Stooges, and the Star Cocktail.

And as we entered our "50s", a new and exciting Atomic Fueled dawn awaited...

In the immortal words of Ben Bernie, "Yowsah, so help me!" Cheers to Cap'n's Cabaret, keep 'em coming!

Congratulations, Cap'n!  I look forward to hearing your adventures every week!

Love these always,, and I appreciate all that you put into it, thanks Cap.