Back again for the exciting conclusion of our two-part 100th Episode Spectacular Celebration. 100 weeks of music, dance, history, and cocktails!

And today we start where we left off in Part I, with the bright, glowing atomic promise of the Atomic Era, whose light radiated out over the world with utopian visions. [image from artprintimages.com]

It was a heady time, the horrors of WW2 finally behind us and the limiltless clean atomic energy to improve lives, bring world peace, and rocket us to the stars.

The Atomic Dawn saw the (temporary) rebranding of the Cabaret as "Cap'n Tony's Atomic Cabaret", a space-age, atomic powered utopian celebration of the exciting new possibilities of our post-war world.

Surely nothing but good times were ahead.

We began our Atomic journey with my friend and agent the great Benjamin "Bugsy" Seigel on the dawn of his greatest triumph, the opening of the Flamingo Hotel in the small desert hamlet of Las Vegas, Nevada.

Not too much had changed from the sleepy country town we visited previously (see Ep. 5), Seigel's star-studded celebration was to be but the first of many glamorous casinos, the new Atlantic City, but who but Seigel could have predicted it?  Alas, he never got to see the fruits of his labor, for we next visited Hollywood to mourn his assassination, with cocktails along Sunset Boulevard. To escape the sad despondency of our lost friend, we took a trip to Cuba, the great American vacation island, where some of Mr. Siegel's "business partners" showed us a great time, and we made our first Television Appearance with the young up-and-coming entertainers Desi Arnaz and his beautiful wife Lucile Ball. Then a trip to college with the band that got all the young girls screaming at thier arrival, those fabulous four musicians who changed music forever, Dave Brubeck and his Quartet. Who did you think I meant? Next we took a trip to the exciting calypso-themed Caribbean and down to the up-and-coming (and possibly neo-Fascist) nation of Argentina. From there we visited the Blues renaissance in Chicago for a Blue Christmas, then back to a greatly grown Vegas for a ring-a-ding-ding New Year's celebration with the Rat Pack.  Next we explored the shared roots of such disparate musical styles as Bluegrass, Country, Honky-Tonk and Bebop Jazz, then a trip to hear the exciting new "Motown" sound coming out of the great promising metropolis of Detroit before ending up with some ruminations on this new "Rock & Roll" sound, and whether it had much of a future.  All in all, a fun little fling for our Fifties with nothing to fear but the instantaneous annihilation of the entire human species under an atomic mushroom cloud.

Fill a copper mug with ice. Pour Vodka and Lime Juice over the ice. Top off with Ginger Ale. Garnish with a lime wedge.

Ep. (5)1: Havin' a Blast at the Flamingo. Jimmy Durante and Xavier Cugat at the Flamingo Hotel's grand opening plus the Pink Flamingo and Bikini Martini cocktails. Bonus: the first episode of Cap'n Tony's Atomic Cabaret!

Ep. (5)2: Mourning in Hollywood. Doris Day (introduced by Frank Sinatra) and two versions of the Corpse Reviver cocktail. Bonus: we mourn the passing of Benjamin "Bugsy" Seigel, my agent.

Ep. (5)5: Come Fly with me to Argentina. Triple Music and drinks: Harry Belafonte and the Margarita, Frankie Anderson (everybody Limbo!) and the Trinidad Cocktail, and Astor Piazolla and Clerico. Bonus: meet Juan and Eva Peron!

Ep. (5)6: A Blue Christmas in Cowtown. A plethora of Chicago Blues artists plus the Scotch Mist.

Ep. (5)9: Movin' in Motown. The Four Tops, The Supremes, and Aretha Franklin plus a Golden Dream cocktail.

As we moved into the Retirement Years of our 60s we were anything but staid. We partied like it was 1899, reminiscing on our youthful years where "Kid Tony's Record Cabaret" got it's start on cylinders of wax. Yes, if our 50s were Atomic, we went real old skool for our 60s and went Steam. We started by exploring the new Ragtime sound that was so revolutionary, possibly the source of all modern American music. We explored Tin Pan Alley, that fount of American sound, and the funky New Orleans "Jass" sound. We shuffled along broadway and took a crooked road through Appalacian folk and country. We took a Diesel/Atomic-era side trip along historic Route 66 (the number demanded it!) before returning to our steamy reminiscence with a trip to Paris for some Bal Musette. 1913 dawned with the shocking, controversial, riot-starting art of the Cubists and caccophonous music of Stravinsky. Next, a visit to Vaudeville and then on to the new Moving Pictures in a sleepy little California town of Los Angeles and a housing development called Hollywoodland with a novel advertising approach. Ah, the Good Old Days! Hope and progress!  What could possibly go wrong? 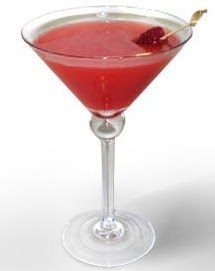 Shake over ice & strain into a cocktail glass. Garnish with lime wedge and fresh raspberries (optional).

Ep. 61: A Ragtime Record Cabaret (Back to Basics)! Scott Joplin, Joseph Lamb, and James Scott with a Tom Collins cocktail. Bonus: the very conception of the American Sound in the first of the "Steam Years" at the Cabaret.

Ep. 63: All That Jass! The Original Dixieland Jass Band, Jelly Roll Morton, and the Brandy Flip, served Hot or Cool.

Ep. 64: Shuffle Along Broadway. Eubie Blake, Al Jolson, and Victor Young with a Boulivardier Cocktail. Bonus: the Birth of Broadway!

Ep. 66: Get Your Kicks! Nat King Cole and the Route 66 Cocktail. Bonus: travel historic Route 66 in its hayday!

Ep. 68: The Shock of the New! Igor Stravinsky shocks the world with his music and we shock your taste buds with a Monkey Gland cocktail. Bonus: meet the art-world-shattering Cubists, Futurists, and Dadaists and see how they shook the art world to its core...if you dare!

Ep. 69: A Night at the Follies. The best of Vaudeville and a Knickerbocker cocktail.

Ep. 70: Those Moving Pictures! Charlie Chaplin and Douglas Fairbanks in the golden years of silent film plus their own signatue cocktails!

Our 70s saw the end of an era and the birth of a new one. It began with War, the Great War, the death of the empires of old as the new machines of war brought untold horror to an already horrible event. We began in the heady days of patriotic fervor but soon saw the death of glory in the trenches. We saw the war take to the air and spread across the oceans, then saw the arrival of tanks and the end of the long static front. Then, a (brief) return to optimism as the armistice finally broght an end ot the constant death, yet a Carthaginian Peace planted the seeds of the next war. With peace here we transitioned out of the old Steam era and into the early Diesel with the booming prosperity and optimism of the post war years. These saw many changes, from the rise of Prohibition (NNNOOOO!!!) and the Speakeasy to the rise of Women's Suffrage to the appearance of Wireless entertainment (the Cabaret takes to the airwaves!). It was a transformative era.

Since booze is now illegal, please do not enjoy an:

DO NOT mix equal parts Gin, Dry Vermouth, and Orange Juice. DO NOT stir well over ice and strain into a cocktail glass. And most importantly, DO NOT DRINK AND ENJOY THIS ILLEGAL BEVERAGE.

Ep. 71: The World Gone Mad [WAR!!]. Partiotic music as WWI begins plus an Old Pal cocktail. Bonus: the first of the WWI series.

Ep. 74: Yanks, Tanks, and a Break in the Ranks! Peter Dawson, "Over There", and the Whiskey Smash cocktail.

Ep. 75: Peace Forever More. Victory celebrations, the Peerless Quartet, and the Regent's Punch. Bonus: last of the WWI series plus ruminations on war itself.

Ep. 77: "Larry" Sent Me! Bessie Smith and the Dorflinger cocktail. Bonus: the rise of the Speakeasy.

Ep. 78: I Say, Give the Ladies a Say! Anti- and pro-suffrage songs and the Daisy cocktail.

In our 80's we fell in love with the new art of Aviation.  The Aeroplane, the Zeppelins, the wing walkers, the record setters...we saw it all. We saw the advent of passenger air travel from its humble beginnings through the golden age of the airships to the growth of the large flying boats. We saw tragedy (Earhart, Post, the Hindenburg) and triumph (Lindbergh, Alcock & Brown, Eckner).  We saw how the wonder of aviation transformed not just how we travel and communicate, but how it changed our culture as we took to the sky and fulfilled that most ancient human dream. Shake lightly over ice & strain into a cocktail glass.  garnish with lemon peel (no pith!).

Stir well over ice and strain into an Old Fashioned glass.  [named for the Maybach 12 diesel engines that powered the Zeppelins...talk about a Diesel cocktail!)

Ep. 82: Flight for the Folk. Paul Whiteman and the Leap Year cocktail. Bonus: ride in an early passenger aircraft!

Ep. 85: Flying Angels. Jack Hylton and a Foghorn cocktail. Bonus: meet the women of aviation, including "friend of the show" "Pancho" Barnes!!

Ep. 88: No Gin?! Oh, the Humanity! Max Fleisher cartoon for "Come Take a Trip in my Airship" and Pauline Charteris' famous Hindenburg Cocktail. Bonus: experience the Hindenburg disaster...which was totally not the Cabaret's fault, really!

And finally, our venerable 90s. It's been a long and exciting road and time to celebrate all that we've seen, done, and become.  Why not Dance the Night Away? The 1920s were a time of dace crazes and wild abandon, from the Charleston to the Shag and all manner of animal-themed struts. Jump up, swing and step, glide and kick, and shake and shimmy what you got, folks! That, and a quick Steamy side-trip to the birth of the Blues!  It all finishes up with the (about time!) end of prohibition and a centenial celebration!

Fill a Highball glass with ice. Add Pimm's and Lemonade. Stir. Garnish with lemon twist and some combination of cucumber slice, orange slice, strawberry, and/or other garnish to taste.

Ep. 90: Dancin' in Charleston! The Charleston and the Gin Rickey.

Ep. 91: Baltimore Buzz. The Baltimore and the Biltmore.

Ep. 92: A Blue Note in Memphis. W.C. Handy and the Pimm's Cup cocktail. Bonus: perhaps the earliest mass-recording of the Blues! A free "Steam" post!

Ep. 93: Trot like a Fox! Foxtrot and the Adonis cocktail.

Ep. 96: Shake and Shimmy! The Shimmy and the Minnehaha.

Ep. 97: Trot like a Turkey! Turkey Trot and the Thanksgiving cocktail.

Ep. 98: Care for a Shag? The Collegiate Shag and Planter's Punch.

Ep. 99: Happy Days are Beer Again! Duke Ellington and the Weep No More cocktail. Bonus: the end of Prohibition!! There's a reason to dance!

And don't forget Part 1 of this Centenial Celebration!

And this concludes the 100th Episode Spectacular of Cap'n's Cabaret, folks!  Thank you all once again for your patronage, support, good wishes, and viewership/listenership/readership over the past 100+ weeks.  Thank you to Tome Wilson for your founding, continued hosting, and maintaining of this site and to all the Dieselpunks, Decopunks, Dieselpulps, Steampunks, Atompunks, Steamfunkateers, Rococoas, Rockabillies, Steam/Dieselgoths, Swing Cats, Hep Cats, Jazz Cats, Bluesmen/women and other afficionadoes of the Diesel Era, Sankofa attitude, and Retrofuturist aestetic!

It's you who makes this all possible!

I'll leave you with a little Benny Goodman to let you swing on out of here.

Thank you, bless you, and goodnight!