Up in the Heavens, daring Devils bring Hell to Earth!  On and under the Seas Men of Iron in Ships of Steel duel for supremacy of the seas. 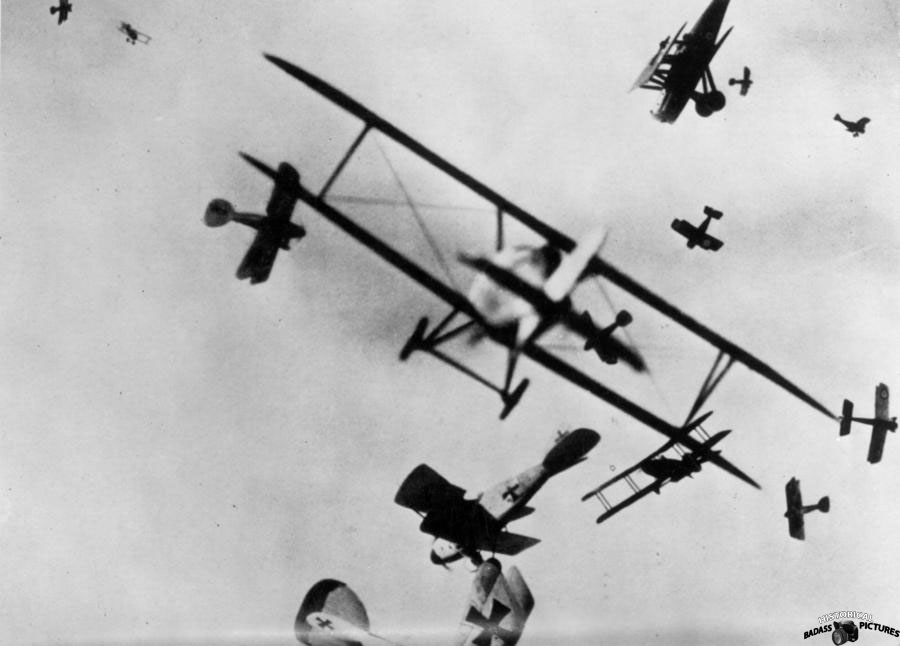 Yes, those Gallant Knights of the Air in their Incredible Flying Aeroplanes!  The glory!  The romance!  The excitement!  Oh, and the old "die horribly in a fiery plummet after ripping apart near-defenceless footmen" part of the game, don't forget that. [image from badasshistoricalpictures.com]

Sure, you've probably heard Henry Burr and his Peerless Quartet sing about the excitement of the air war [Listen to the Original Cylinder Recording from the University of California, Santa Barbara, Cylinder Preservation & Digitization Project], but to live it up-close is another horrifying aspect of our modern, industrialized warfare.  Those amazing machines that awed you at the air show have taken on a new killer aspect with machine guns and bombs.  Whether the sleek Albatross, Fokker, Nieuport, or Sopwith Pursuit aircraft, or the big, lumbering Vickers and Gotha Bombardment ones...or even the Hun's nasty Airship Bombers!...these amazing technical marvels grow more powerful, sophisticated, and deadly with each generation.

For some, like Richthofen, Ball, or Fonck, it is playing the deadly reaper, the Flying Knight, the Ace.  For most, only an agonizing death by crash or fire or bullets awaits.  For a new pilot, life expectancy is measured in minutes rather than days.

Yet compared to the muddy hell of the trenches, the perceived clean, noble life of the Airman looks alluring, even gallant.  So we sing Mr. Burr and the Quartet's famous pre-war "Aeroplane Glide" in memory of a more innocent day of aviation, when the danger was only to the self, and salute the bravery, or foolhardiness, of the men who fight in the new Front of the Air.

And then there is the War at Sea.

Those massive Dreadnoughts, all in a line, present an awe-inspiring visage of Modern Might and Prowess, and for the Trenchman or Citizen once again evoke an image of cleaner warfare.  Yet the smoke-choked, grease-stained metal bowels of a Battlecruiser are no leisurely cruise on a Transatlantic Steamer.  The massive shells of their giant cannons - some a full foot in diameter! - rend steel like paper and turn flesh and bone to mist.

Take the Battle of Jutland where 25 ships were sunk, including four large Battlecruisers, sending over 8,000 men to a fiery or waterlogged death. Or take the cramped, hot existance of life on a submarine, dealing assassin's death to surface shipping and falling prey in return to the feared depth charges.

Wherever the war takes you, there is only misery and death in this War Without End, a mindless exchange of futile assaults for the glory of outdated Emperors.

In that spirit of that which looks beautiful and glorious, but has deadly consequences, enjoy a Morning Glory cocktail, named for a flower that is at once beautiful, yet will slowly choke off its surrounding neighbors:

Stir all but the soda over ice, pour into a Highball glass, top with soda. Garnish with a lemon twist.