The appearance of mechanized war tractors and the late entrance of the USA is breaking the stasis of the Western Front.  Meanwhile Revolution in Russia and the systematic collapse of the Italian Front at Caporetto threatens to drive both those nations from the Entente.  Has the tide of this horrible war finally turned?  If so, to whose advantage?

"Tanks" they call them, a deceptively benign name for these great tracked steel behemoths armed with cannons and machine guns.  They lumber over trench and shell hole, crush barbed wire, and shrug off all but direct hits from artillery.  This new mechanized cavalry may be what is needed to end the futile "over the top" infantry charges that have characterized the Western Front of the war so far, but at what a horrible price on the ground!  These things crush men with just as much ease, yet turn into burning death traps for those inside when they do falter.  I'll leave the rest to our friend Peter Dawson in his song "The Tanks that Broke the Ranks Out in Piccardy":

Adding to the chaos, the Italians are in full retreat while Russia is on the verge of implosion.  The Russian Army and Navy are in open revolt against Nicholas II, forcing him to abdicate. The provisional Government remains in the war, but for how long?  Adding further to the fire, one of the strongest factions in the incipent revolution are the Communist forces under a revolutionary named Vladimir Lenin. [image from historyofrussia.org]  Some of the band, those who harbor more Left-Socialist sympathies than myself, see this Lenin as a Russian Washington, here to liberate the Russian people from the repression of the Czardom.  Yet the quasi-religious rhetoric of this Marxist uprising sets me at ill-ease.  I keep thinking about Robespierre and Oliver Cromwell rather than Washington or Jefferson of Adams.  I fear the situation will only worsen before it gets better...

Meanwhile the Italian line has collapsed and is in full retreat towards Veneto.  The King may soon sue for peace if the line is not stabilized soon.  A year ago I might not have cared which batch of gray-haired old Monarchists came out on top of this furball and would have welcomed anything that spelled an end to the pointless meat-grinder slaughter.  But suddenly, I have a Dog in the Fight.  Yes the Kaiser's renewal of unrestricted submarine warfare has pulled even my distant nation into this mess.  Even that damned Virginia Klansman in the White House couldn't maintain our neutrality.  I will say to his credit he has a plan for a peace without repercussions and an idea for an international peace-keeping league that might actually be worth the price of admission in the long run.

To my end, knowing that my draft number would come up eventually, I decided to join the war effort.  Thankfully for those of you at home fearing I'll soon be among the trench rows, one of the fans of our show is Marine Corps Colonel Smedley Butler, a real American hero.  It looks like the Kid Tony Band will live on as an adjunct part of the United States Marine Band, bringing the popular Ragtime and Jazz sounds to entertain the troops, particularly the Leathernecks en route to the front near Paris.  As a part of this deal yours truly gets a Commission in the USMC as a Captain.  I guess I'll be Captain Tony now!  Seems so formal...

So, strike up the band and raise the colors, folks, because the Yanks are Coming!

The question remains, will we be in time to save the Entente?

Until the fates decide, let's celebrate with a Whisky Smash as we prepare to smash the Hun flat! 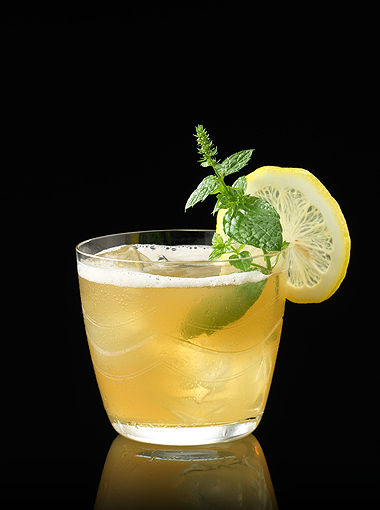 Slice lemon quarter into 2-3 pieces and muddle (Smash!) mint and lemon.  Add Bourbon and simple syrup and shake vigourously over ice (~30 seconds).  Strain into a Highball or Rocks Glass and garnish with a mint sprig.

great reading your history posts and seeing all the images -