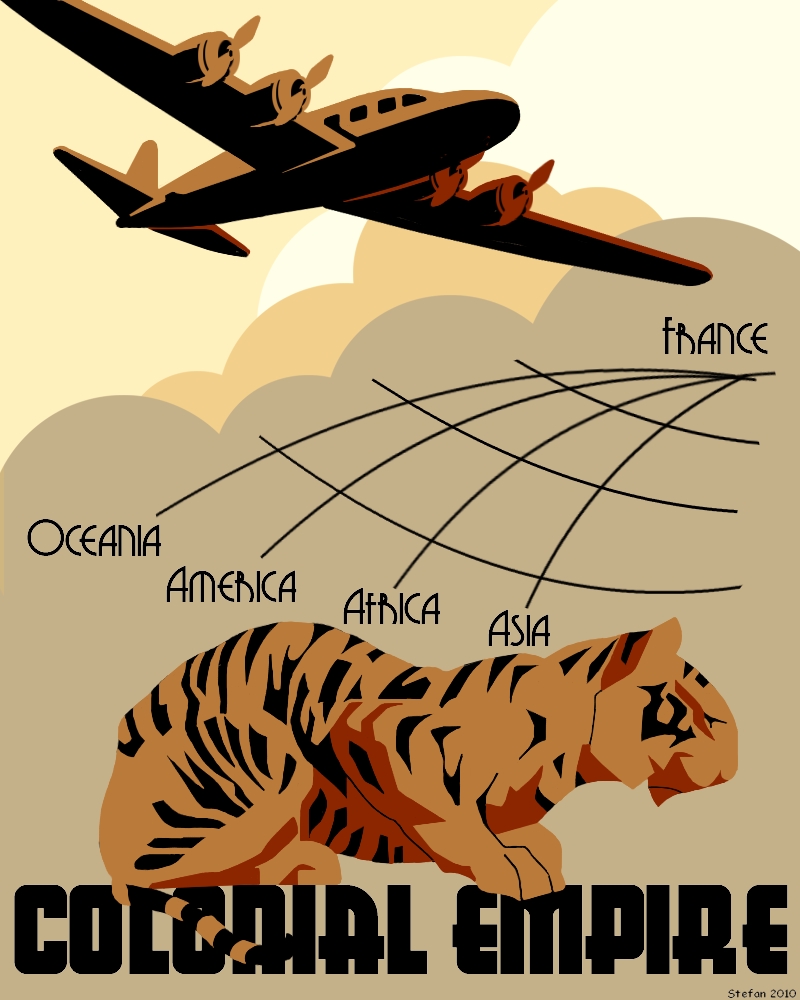 Here is the second part of this triptych of pre WWII-style posters. Hope you'll like it.

In 1931, is held in Paris the International Colonial Exhibition. Fourth of its kind, the 1931 fair is very much the symbol of French colonialism, at its absolute peak, then. With 103 millions of people on a territory of more than 12 millions square kilometers spread out over the five continents, France owns, then, the largest colonial empire right after Great Britain. Numerous "protectorats" and countless countries financially depending on France have to be added to an endless list made even longer by the German defeat of WWI.

Although a huge success, the 1931 Colonial Exhibition, along with the "wonders" of civilization à la Française it displays, is also considered a shame and a disgrace by many people, because of the "human zoos", so fashionable all over Europe, then, where native people of various ethnies are put on display for the public.

Shortly after, France is defeated in its turn by the Nazis in 1940. In spite of the 1945 victory, the magnificent colonial empire helplessly collapses after WWII, partly because of the independantist influence of USSR and USA on local populations. France, then, gradually withdraws from all territories that once were its strength and pride, turning the French colonialist spirit and folklore into a still to be explored very dieselpunk uchronia !

All the wonderful graphic tools you mentionned, Tome, sound amazing. Sadly, none of them I can afford... So, I guess I'll have to stick to my usual technique I used for the above picture, hand sketching and digital coloring. However, I'm very pride and very honoured that, in spite of my modest media, you've made me a featured member of the Dieselpunk website ! Thank you very much.

Comment by Tome Wilson on April 6, 2010 at 7:50pm
Great work on the plane. I like your other propeller style a little better though. When the propellers looks like they're moving, it makes the who piece look a little more dynamic. Maybe some motion lines behind the plane?