Although located downtown in Paris, the VIIIe arrondissement is considered one of the "new" districts of the French capital city. Mostly fields and gardens till the mid-XVIIIth century, along with the western part of Paris, it became a place for expansion of the city from the XIXth century. A place for tremendous real estate speculation, too: the newly designed lavish environment rapidly made the VIIIe district of Paris one of the most sought-after places for high bourgeoisie, politic and finance. By tradition a place for elegance, power and wealth, apart from many emblematic items such as the Champs-Elysées, most of the parisian palace hotels and the Palais de l'Elysée, the VIIIe district includes countless embassies, headquarters offices of prestigious companies and banks.

In 1929, regardless of the American stock market crash which was to quickly spread out worlwide its devastating effects, Pasquier Street 34, the French architects Pierre and Alexandre Fournier completed the building for the headquarters of the Société Financière Française et Coloniale, a business bank specialized in overseas trade and investment. 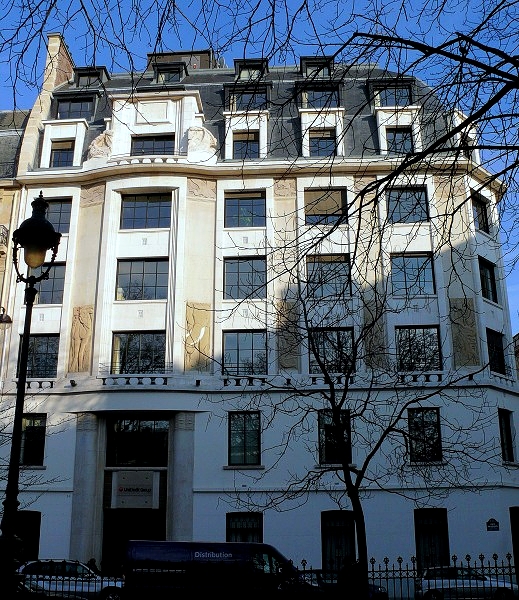 Both featuring the latest trends in fashionable Art Deco and designed to blend in with the XIXth century buildings around it with its steep multi-level slate rooves and chien-assis (lit. sitted dog for roof window) the building emphasizes the original colonial vocation of the banking establishment with a stunning collection of seven animal themed bas-reliefs by the French sculptor George-Laurent Saupique. 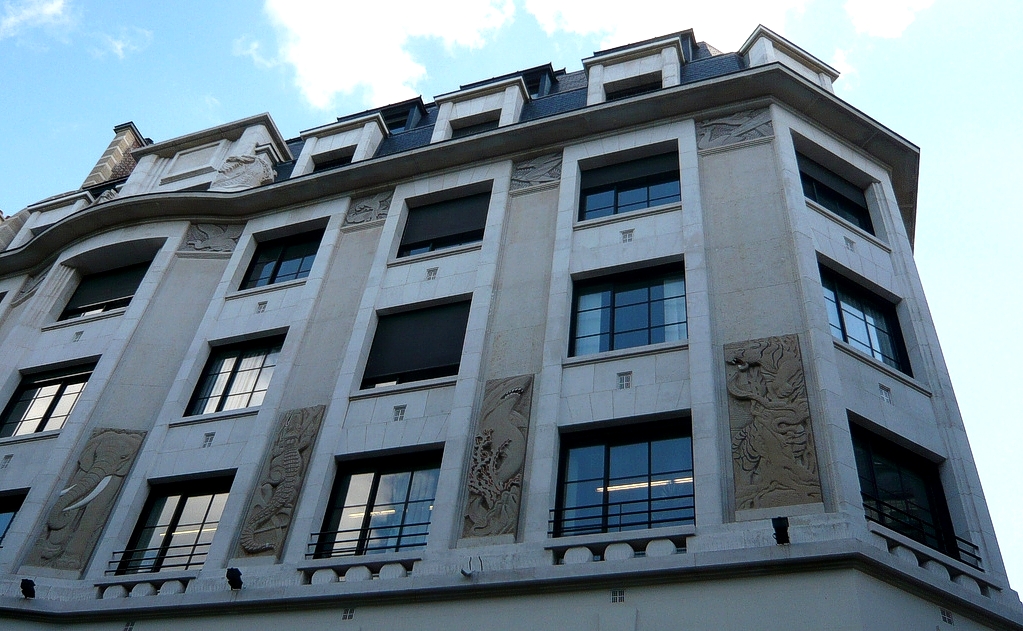 Unfolding along the elegant façade, the colored ceramic-enhanced stone set shows a camel, an elephant, a crocodile, a shark, a tiger, a gazelle and a snake, among others. 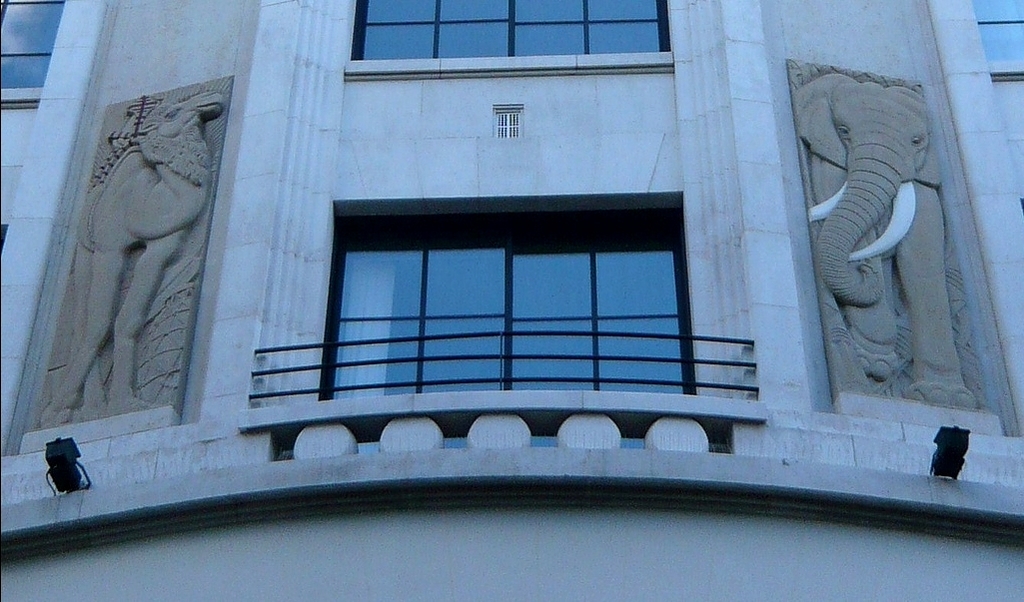 Far less known than his own work, Saupique, often reffered to as a "colonial sculptor", extensively traveled in Egypt and spent a lot of time in zoological gardens to study animals, his other passion. 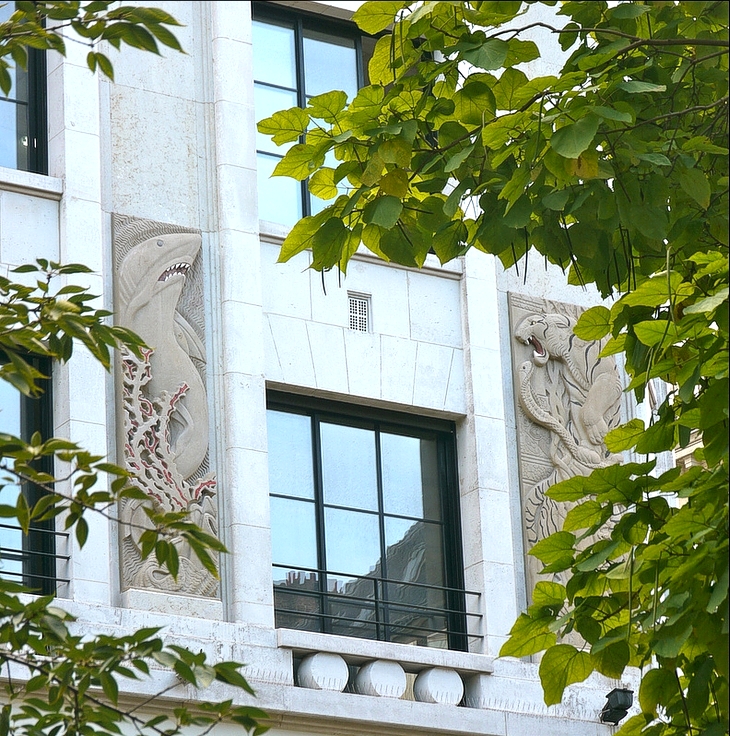 This passion, already evidenced by his prize winning statue of an auroch at the Paris 1925 International Art Décoratifs Fair, clearly made him the ideal artist to best picture the colonial spirit of the prestigious architectural achievement. 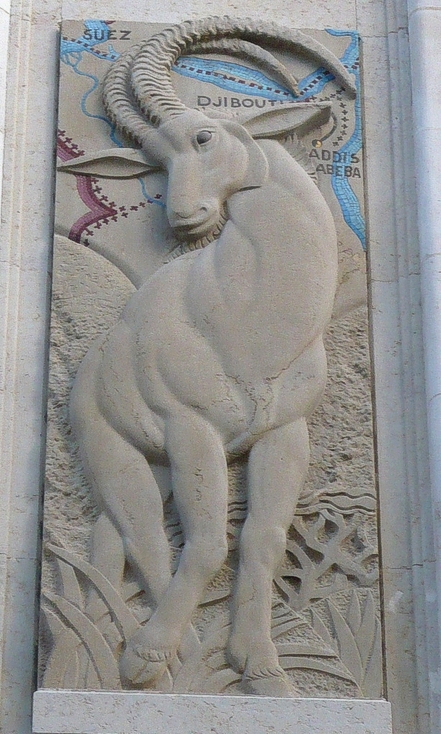 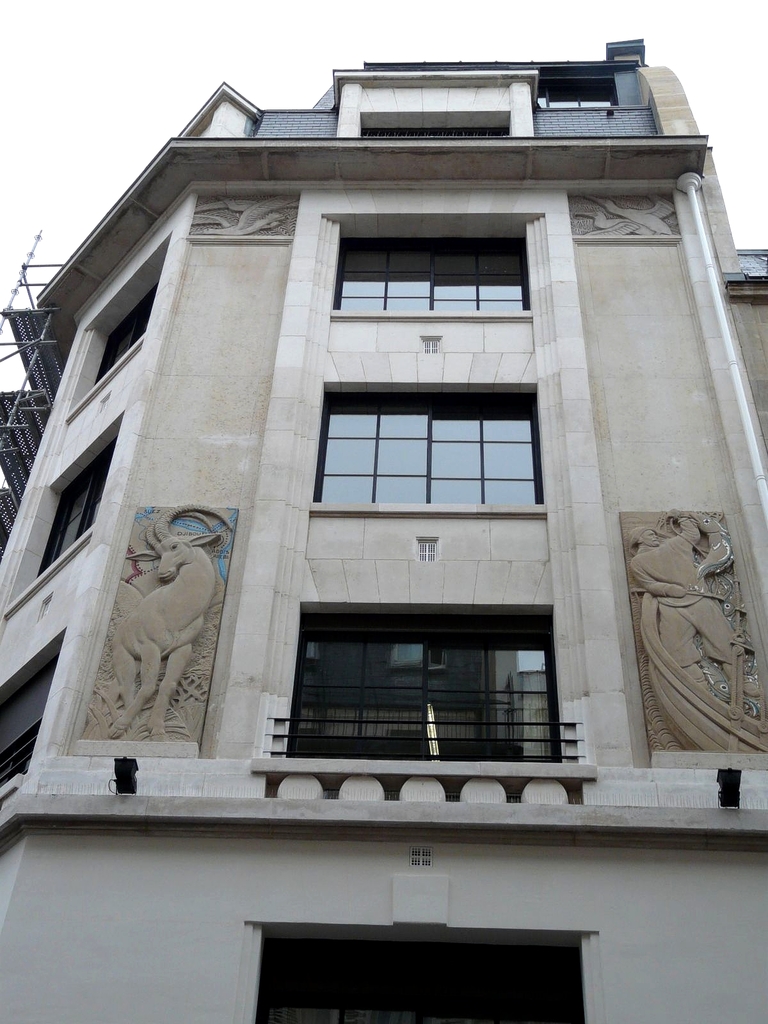 Completing the bestiary, at roof level and right under the cornice, the façade shows another set of Art Deco bas-reliefs with a tropical birds theme this time. Sadly, the most spectacular of it all is not available for us, mere mortals, to see anymore. To decorate the hall of the building, the banker Octave Hombert commissionned George-Laurent Saupique to make four 2 meters high (6,562 ft) colored marble and bronze statues, allegories of Black Africa, Indochina, North Africa and West Indies. It took Saupique two years to complete the set of statues which have been removed and are now part of a private collection unavailable to the public. More views of this gorgeous façade in this short video:

No longer a bank, the building has been remodeled last year, as the scaffoldings show it on some photos. I'm lucky enough to practically see this Art Deco marvel from my own windows so, needless to say, I was fearing the building could be turned into a department store or a supermarket or something and almost daily checked the work in progress. Thank God, it's still here in all its Thirties glory. A stunning jungle downtown Paris, isn't it?