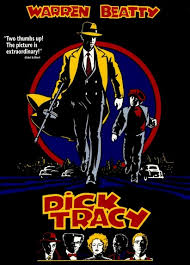 Last night I explored the world of Dick Tracy again. This movie, along with Batman, and the Rocketeer were my first introductions to the world of Diesel Punk. I fell in love with the visual feast of the Art-Deco world imagined by minds in the late 80's early 90's and the powerful rhythm in the scores and soundtracks stuck like glue in the head and painted our worlds. I was but a child of 5 years when Warren Beatty's Dick Tracy burst on the cinematic screen:The classic cars, bright colors (a meticulous amount of attention is given to primary colors in the clothes and settings in the film.) and the eternal fight between good and evil was found in the career driven Detective Tracy (Warren Beatty) and organized crime taking over his beloved city. Tracy's almost one track mind to bring to justice the Alphonse"Big Boy" Caprice's crime syndicate is given flashes of humility by his sweetheart, the faithful Tess Truhart and an adopted orphan named Kid. This movie straps in the action and character building relationships seamlessly.

If you're looking for fun with a twist 1930's cool, Dick Tracy will satisfy your need in a big league way!