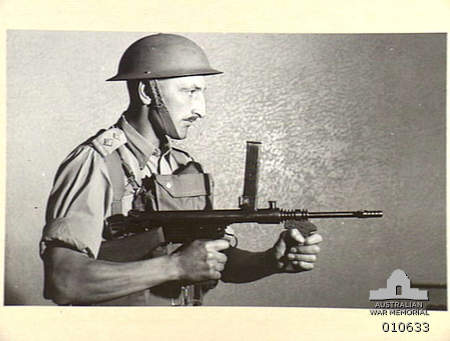 Australia went to war as a member of the Commonwealth, fighting primarily with Commonwealth weapons. But as a continent, facing the dropping heel of the Japanese Imperial boot, their military forces needed as many firearms as they could get their hands on. So instead of turning outwards for more guns, they looked inwards to a 27-year-old who created one of the most reliable and overlooked submachine guns of history.

Evelyn Owen had created a .22 caliber smg that would be refined and end up going to battle in the hands of the Diggers from the 1940s all the way through the 1960s and their involvement in Vietnam.

Chambered in 9mm, the Owen was fed from a double stacked vertical magazine. Unlike most weapons of the period, the Owen magazine fed rounds into the receiver from the top down. Owen believed that gravity acting on the column of bullets would improve feeding reliability.

Innovation wasn't in the magazine however, but the bolt and barrel. 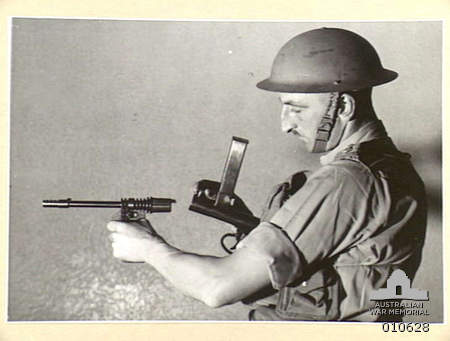 To remove a barrel from most modern small arms an armorer is needed. And it is certainly not something one can do in the field, in austere or harsh environments. Squad weapons, those fed from a belt used in heavy suppressive fire, have quick change barrels. But those are systems designed to be worked by a team. Quick change barrels in submachine guns are very rare.

Yet with the Owen the barrel assembly was held in the receiver by a spring loaded plunger. By pulling up on the plunger, located ahead of the magazine assembly, the barrel could be withdrawn directly out of the gun. A new barrel assembly could be swapped out for the heated or fouled one.

Another reliability aspect of the Owen was its bolt assembly. As an open bolt, the weapon receiver is particularly prone to fouling from debris and dirt. The Owen SMG had a bulkhead type arrangement that kept the bolt compartmented from the intrusion of debris.

This design element was proven as the weapon went up against other submachine guns during service trials. Dirt, sand and mud were heaped on all the weapons. Only the Owen kept firing.

It's simplicity earned it a place in the Digger arsenal for over 20 years.