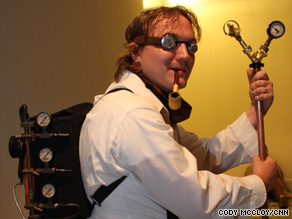 ATLANTA, Georgia (CNN) -- It's Geek Pride Week in Atlanta as thousands of fans take over four downtown hotels for Dragon*Con, an annual celebration of science fiction, fantasy, comics and gaming.

Where else -- OK, other than San Francisco or New Orleans -- are city streets shut down for a ragtag parade of zombies, superheroes, robots, Klingons and Middle Earth dwellers?

Where else can comic book collectors rub shoulders with movie stars, vampires, alternate-history speculators and Harry Potter look-alikes, all while taking part in a lively game of Godzilla Bingo?

The whole thing is a bit of a shock to college football fans in town for the season-opening game between Alabama and Virginia Tech, one of whom called it a "freak show." But those aliens grow on you after a while.

"At first I thought it was really strange," Hokies fan Emily Nardone of Ashburn, Virginia, said. "But now I see everybody's having so much fun. And I enjoy looking at the freaks."

One Dragon*Con "freak" getting a lot of looks was Karen Lee of Cullman, Alabama. She was dressed a dramatic, cleavage-baring winged costume inspired by "Dawn" comic book artist Joseph Michael Linsner.

Lee made the costume by hand at home. "My living room is completely demolished," she said. Her husband, Dillan, made up as the Batman character Two-Face, said he could attest to the condition of the living room.

Lee is entered in a Dawn look-alike contest with a top prize of $1,000.

"The theory behind the concept of Dawn is just paying homage to women of all shapes and sizes," she said. "She can be blonde, brunette or redhead. So basically, it's just inviting women to get up there and do their interpretation of what they think beauty in women is." iReport.com: Share your pics and videos from Dragon*Con

Fashion augmented with gadgetry is what drew Pendleton, South Carolina, librarians Gypsey Teague and Marla Roberson to a Dragon*Con workshop on Steampunk costuming.

Steampunk is sci-fi set in a Victorian aesthetic. Think pearl-handled, brass-barreled ray guns. The movies "League of Extraordinary Gentlemen" and "Wild Wild West" are examples of the genre.

"Anything your imagination can come up with, you can do," Roberson said as she marveled at a vendor's shoes that had little copper boilers and compasses on them.

But it seems there's a certain element of snobbery in Steampunk. A crew of Steampunk pirates entered the room, decked out in their tricorn hats and eye patches. Teague was not impressed.

"Where's your molecular destabilizer?" she sniffed.

Out in the hallway, Steampunk time travelers Candace and Kane Bacon were just arriving. They're new to the game, but Kane had a copper staff with dials on top and a big metal backpack with dials and knobs strapped to his back. A large brass key dangled from the sash around Candace's waist, and she carried a basket of dinosaur eggs they'd found.

"Some of it we had just [lying] around the house, antique stuff," Candace said. "Other parts we got from Lowe's. The backpack is made from radio parts; my dad is in the radio business, and he got some old radio parts for us. And yard sale gadgets."

She said she was a Steampunker before she knew what Steampunking was.

"I'd always liked Jules Verne and H.G. Wells, that type of stuff," she said. "I decorated my living room in antiques and like, old compasses, and I didn't realize that that was Steampunk until we actually got here" to last year's Dragon*Con, she said.

The Johnson City, Tennessee, couple chose to forego the hotels and stay with a friend just outside Atlanta and ride MARTA, the public rail system, in to the convention.

MARTA's central Five Points station was peopled Saturday morning with anime heroines, a wizardess with green lipstick and an incongruous ladybug who appeared to be about 8 years old -- all mingling with football fans, a few of whom were in pretty outlandish getups themselves.

There were no incidents, however, as intergalactic military police were on hand everywhere to maintain order.

Back at the Marriott Marquis, thousands of attendees snaked through lobbies on several levels. Among them was Melinda Ellington, an international affairs student at Georgia Tech. She carried an orange and yellow parasol and wore a green jumpsuit as the spaceship mechanic Kaylee from the short-lived Joss Whedon TV series "Firefly."

"You meet anyone who likes 'Firefly,' it's weird because we immediately become like family," she said on the hotel's mezzanine. "A very large, creepy, incestuous family, but family nonetheless."

In the lobby below her, a 20-piece brass band blasted a set of Henry Mancini show tunes while thousands of attendees filed past. They needed to keep moving, lest anyone be late for the Evil Geniuses for a Better Tomorrow Recruiting Session and Bake Sale.