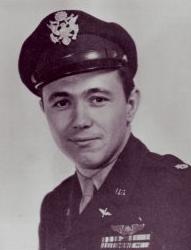 Nearly 69 years ago, Theodore "Dutch" Van Kirk navigated a U.S. B-29 Superfortress called the Enola Gay over Hiroshima, Japan, on a sunny August day. Once over its target, the Enola Gay unloaded the first atomic bomb dropped in war.

A single bomb blast killed some 140,000 people and helped end World War II -- and pushed the world suddenly into the nuclear era.

On Monday, Van Kirk died of natural causes at the Park Springs retirement community in Stone Mountain, Georgia, according to his eldest daughter Vicki Triplett.

His death means there are now no surviving members of the Enola Gay's crew who, by doing their jobs, became an early and integral part in the ongoing narrative over nuclear weapons.