As Germany collapsed upon itself in the closing months of World War II, Allied units raced forward, each nation jockeying the first to cross the Rhine. To do this with rapidity, it sometimes meant that forces were ahead of their support, both logistically and martially. Bad weather grounding close air support, or lagging artillery meant that infantry and mechanized units were left on the leading edge alone.

Needing a combination of arms to achieve victory, ingenious problem solving was required. One solution conjured up by the British was to take a pair of air-to-ground rockets, mount them to a Sherman tank, and dub it the Firefly.

The Firefly was literally born in 24 hours and was simply constructed, with potential beyond its crude composition.

Two brackets were affixed to the turret of the British Lend lease Sherman tanks fielded by the Coldstream Guards as they raced towards Germany. The two rockets were adapted from the standard 60 pound warhead rocket utilized by the Royal Air Force in air-to-ground attacks.

The rockets, RP-3s, were particularly effective on fixed targets, gun emplacements or gathered infantry in concealed positions. When one of the hefty rockets heaved from the tank and exploded on a target, the Firefly proved both physically and psychologically effective. 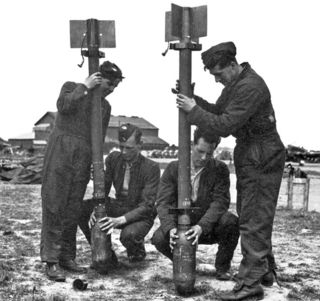 Both Armor Piercing and High Explosive warheads were used by Firefly equipped tanks of the British. The Firefly, also joined by another Sherman type dubbed the Tulip, achieved accurate and notable results when the rockets went into action. They were accurate, due to the fins at the rocket base; as well as potent, because of the 60 pounds of explosive in their warheads.

Okay, this is going to sound really geeky, but this topic needs clarifying. The standard Sherman Firefly was a British mod of the standard Sherman M4 tank, with a 17pdr high velocity gun, to give the tank more punch against the heavily armoured panzers. This did not feature any side rockets. The Sherman Tulip is actually a Sherman Firefly with the addition of the RP-3 rockets. So the topic should be renamed Tulips Over The Rhine. /geekmode off