Folding Gun of Gaul: The MAT-49 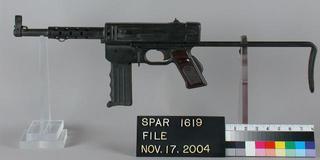 After World War II, the French military establishment wanted to embrace the small-arms renaissance of the submachine gun. By the late 1940s, the French had their gun, the MAT-49.

The MAT-49, chambered in 9mm Parabellum, was constructed mainly out of stamped pieces of heavy sheet steel. Machining parts was kept to a minimum to reduce cost and production time.

As a direct blowback weapon, it fired from the open bolt (bolt locks back and is released with the pull of the trigger.) While not a revolutionary weapon in operation, it is distinct for a series of features like a grip safety and a unique folding magazine well.

If you've ever seen an Uzi submachine gun or Colt 1911 pistol, you've seen a grip safety. The MAT-49 used this same technique to ensure the weapon only fired when properly gripped. The safety, located on the pistol grip rear, was disengaged when a hand fully grasped the weapon. When the weapon was released, the grip safety would cam forward slightly, blocking the trigger mechanism, removing the threat of accidental discharges.

The other facet that made the MAT-49 unusual was its folding magazine well. When the submachine gun traveled with support troops, rear-echelon noncombatants, artillery crews or airborne forces, the forward magazine well could be flipped upwards. This quickly reduced the overall size of the weapon, along with the telescoping metal stock, until a magazine was inserted into the well after it was flipped into the vertical position.

One of the short comings of the MAT-49 was its single stack 32-round magazine design itself. While modern high capacity magazines are doube-stacked (with ammunition slightly offset, staggered in a column) the MAT-49 was one round stacked directly atop the lower. As a result, the magazine design with lack of a curve, resulted in misfeeding.

However, that problem did not hamper the MAT-49s service life or success, being used by over 20 nations, mainly French Colonial states. The MAT-49 saw combat in Indochina, the Suez and Algeria. In the case of Indochina, known today as Vietnam, numbers of MAT-49 were captured by the Viet Minh. The Soviet aligned insurrection forces had the MAT-49 re-chambered to Communist Bloc 7.62mm pistol, which was available in large quantities during the Indochina War.

Up until the early 1990s MAT-49 could be found in the hands of French troops and Gendarmes. And to this day small batches of MAT-49s are wielded by guerrillas or insurgents many former French colonial nations.

Comment by IRON CROSS on August 20, 2010 at 5:25am
this sub machinegun was rugged and cost effective and had a service life well into the cold war

Since it was in the hands of the good guys, I guess it was better than nothing.

Comment by Larry on August 18, 2010 at 6:26pm
At least it's better than the piece of crap Chauchat that the French made for WWI.