In the mid-1980s producer Giorgio Moroder released a highly controversial version of the silent movie era classic: Metropolis. According to Wikipedia:

In 1984, a new restoration and edit of the film was made by Giorgio Moroder, a music producer who specialized in pop-rock soundtracks for motion pictures. Moroder's version of the film introduced a new contemporary pop music soundtrack for the film. Although it restored a number of previously missing scenes and plot details from the original release (in particular, Moroder's version restores the character of Hel, who was omitted from the original release version of the film due to problems with American censors), his version of the film runs to only 80 minutes in length, although this is mainly due to the original intertitles being replaced with subtitles, and being run at 24 frame/s. The "Moroder version" of Metropolis sparked heated debate among film buffs and fans, with outspoken critics and supporters of the film falling into equal camps.

The Moroder film's release came at the same time that Queen released their video "Radio Ga Ga", which featured footage of the film. Though the Moroder version was nominated at The 1985 Razzie Awards for Worst Original Score and Worst Original Song (with Freddie Mercury), it brought the film back to the public eye.

Copyright laws have been resolved and the Moroder version has now been released onto DVD and Blu-Ray. 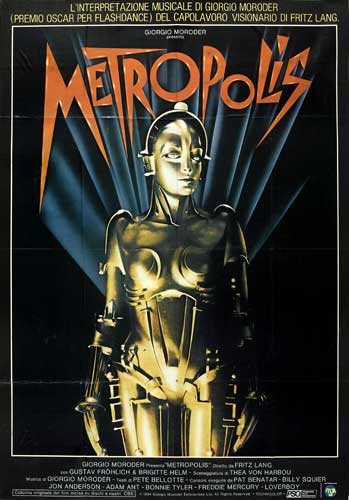 Meatloaf in Metropolis? What a jolly good idea!

I too can come up with a better list of musicians. Imagine an entire original score written and directed by Jim Steinman. Then keeping powerful voices like the legendary Freddie Mercury as well as Pat Benatar but add musicians such as Meat Loaf along with maybe the Wilson sisters (Heart). That would have been amazing and would have turned this into a fantastic rock opera.

When I first heard that they were producing a version with Billy Squire, and Loverboy doing some of the music.  I thought I was going to retch.  A much commercialized Queen made it seem worse.   When I actually saw this version, I was pleasantly surprised.   Even pieces by Loverboy and Billy Squire were amazingly fitting, probably the closest thing to real art they ever did (You don't know how it pains me to say that <: (  ).   Still Its better to see the new more complete version previously reported here.

Believe me, I'm very grateful to Giorgio Moroder (and to Queen with their Radio Ga-Ga) for bringing Metropolis back to the masses. But I don't like the soundtrack, except for Machines instrumental. Thinking of 1980s Metropolis I imagine music score with the likes of Laibach and New Model Army. And, in some alternate world, a  1970s soundtrack by Kraftwerk ;-)

I know there are many who hate his version but I actually like it and I think Lang would have approved. We know that some versions released were indeed colorized so that shouldn't shock anyone. One must also ask ourselves, is Moroder's version in some ways in the spirit of Dieselpunk by adding the modern score to the film?

Those were the days... of plastic: