Introduction to Googie
From http://www.spaceagecity.com/googie/ 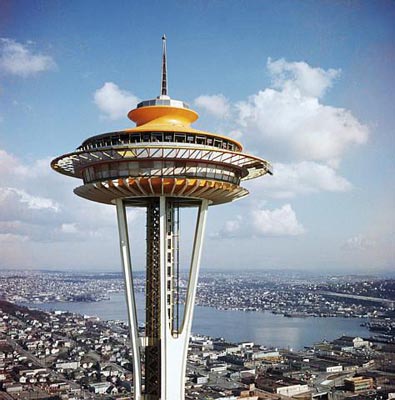 Cars with jet-like tailfins zoomed past giant tiki gods, rockets and flying saucers on their way to Disneyland. In some ways, the Space Age, or Googie, architecture and design surrounding the park blurred the line between the Magic Kingdom and the real world.

The Space Age Inn, Satellite Shopland and the ultra-modern Bob's Big Boy restaurant were like extensions of the promise of Disney's Tomorrowland. Likewise, a giant tiki with glowing eyes standing before the Pitcairn Motel was nearly as intriguing to young visitors as the restless natives hiding in the jungles of Adventureland.

These are some of the more exotic examples of Googie, a style of architecture that thrived in the 1950s and early 1960s. It began as commercial architecture designed to make the most of strip shopping centers and other roadside locations. It fit the needs of the new California "car culture" and the dreams of the even newer space age.

Googie began in Southern California, and although it spread (in numerous forms) across the nation, its heart always remained in its birthplace. Los Angeles and Orange County, California remain some of the best places to see what remains of the style.

Googie has also been known as Populuxe, Doo-Wop, Coffee Shop Modern, Jet Age, Space Age and Chinese Modern. In some cases it has been grouped with its cousin, Tiki architecture. It is also sometimes identified as part of a larger overall movement of space-age industrial design. Googie often seems like a joint design by the Jetsons and the Flintstones.

The Origins Of Googie

"He selected the vaults and glass walls and trusses and angles of his buildings to fit the original, often unusual, concepts of space he favored," writes Hess.

Lautner originated the style that would be refined and reinterpreted by many others. Unintentionally, he also gave the style a name when, in 1949, he designed Googie's coffee shop at the corner of Sunset Boulevard and Crescent Heights in Los Angeles.

Professor Douglas Haskell of Yale was driving through Los Angeles when he and architectural photographer Julius Shulman came upon Googie's. "Stop the car!" Haskell yelled. "This is Googie architecture." While Haskell was dubious about the style, he made the name "Googie architecture" stick by using it in a 1952 article in House and Home magazine. Unfortunately, the term soon came to be a slur in "serious" architectural circles.

The Symbols & Metaphors Of Googie

Googie, with its extremes, metaphorical qualities and humor has always been hard to categorize. This may have been partly why "serious architects" had trouble taking it seriously while the masses seemed to love it.

Googie architecture and design was art that told a story. The story had many variations, but its general plot was always something like this:

Man left his caves and grass huts and through hard work and ingenuity has built an amazing modern world. Tomorrow he will conquer any remaining problems and colonize the rest of the galaxy. However, for all his achievements and modern science man will never lose touch with the natural world and his noble roots.

The themes of history and primitive man were expressed in buildings and decor that reflected the Old West, the South Seas and even caves. (The interest in South Pacific motifs was partially a result of World War II servicemen returning from tours of duty in that region.)

Man's continuing link to nature was expressed in a number of ways, including the common use of rock and fake rock (flagcrete) walls, lush landscaping, indoor gardens, and vast plate glass windows that broke down traditional barriers between inside and outside. In the world of Googie, it's not uncommon to see UFO-shaped buildings with one rock wall, three glass walls and palm trees growing straight up through a cutout shape in an overhanging roof.

The Elements of Googie

Various designers and architects represented the theme of man's utopian future in many ways. Like obscenity, Googie is hard to define, but we know it when we see it. Some of the more common elements include the following:

Upswept Roofs -- This was especially common in the prototypical Googie buildings: coffee shops. An upswept roof allowed larger glass windows up front. Sometimes these roofs also incorporated the boomerang shape. Either way, it made many buildings look as though they were about to take off and fly. Variations on this style included the parabolic roofs of early Bob's Big Boy restaurants, designed by Armet and Davis.

Large Domes -- Often made of concrete, this was an exotic new shape for buildings made possible by advances in construction technology. It evoked the environment-controlled space stations and extraterrestrial cities that appeared on the covers of science fiction books and magazines. Some domes were reminiscent of flying saucers. Examples include the Anaheim Convention Center, the Cinerama Dome, and even the glass top of the 1956 prototype Pontiac Firebird.

Large Sheet Glass Windows -- These served several purposes. First, a tall glass front made the building itself a living billboard to drivers on the streets outside. This was a major consideration now that car travel was a key element of commerce. Also, the vast windows brought the outside in and made a sunnier brighter atmosphere for those inside. Often, the use of sheet glass with thin but sturdy steel support structures made roofs appear to float.

Boomerang Shapes -- This shape appeared in nearly every corner of the design world in the 1950s, and architecture was no exception. It appeared in archways, roadside signs, pools (often called kidney-shaped), and tile mosaics. Outside architecture, the shape was echoed in butterfly chairs, Formica patterns, corporate logos and textile prints. The origins of the boomerang as a symbol of the jet- and space-age is a little hazy, but it may be related to the "flying wing" aircraft, the expressionist art of Paul Klee and Joan Miro´, or simply the idea of an arrow shape pointing the way to progress.

Amoebae Shapes -- Sister of the boomerang, amoeboid shapes were amorphous blobs that appeared in many places, including roadside signs. Some suggest that these blobs were the predecessors of the boomerang. Some have also speculated that this design element came from World War II air defense camouflage patterns.

Atomic Models -- This design element appeared in everything from sculpture and roadsigns to dinnerware patterns and household appliances. The interlocking rings of the atomic model were a symbol of man's scientific ingenuity and represented the unlimited power that would make our future utopia possible. It also doubled as an (inaccurate) model of the solar system.

Starbursts -- An even more ubiquitous design element than the atomic model, the starburst took many forms. Just as the atomic model was shorthand for the "innerspace" scientists were exploring, starbursts were symbolic of the outer space being explored by astronauts. It also implied clean and shining surfaces.

Exposed steel beams -- These were usually more about appearance than function, but could serve both purposes. Painted steel I-beams often had geometric holes cut in them which served the dual purpose of making them lighter and enhancing their visual similarity to rocket gantries.

Flying Saucer Shapes -- Again, this motif was taken from the movies and covers of science fiction books and magazines. The Space Needle in Seattle, Wash. is an excellent example.

Although Googie buildings were often quite different from one another, Douglas Haskell noted that the style had certain rules:

1. It can look organic, but it must be abstract. "If it looks like a bird, it must be a geometric bird. It's better yet if the house had more than one theme: like an abstract mushroom surmounted by an abstract bird."

2. Ignore gravity altogether. "Whenever possible, the building must hang from the sky."

3. Multiple structural elements. Inclusion is the rule, rather than minimalism.

New materials, including sheet glass, glass blocks, asbestos, plywood and plastic gave the architect a whole new palette to work with. Other innovations allowed steel and cement to be used in new ways. Suddenly, architects had more elbowroom for their dreams. A room made of plastic could look like a log cabin, a space ship, or almost anything.

The End of a Dream

Googie was about the past, the present and the future -- But mostly the future. It was part of the popular culture, which reinforced a unified vision of a utopian future built on mankind's work and ingenuity.

Like most art forms that told a story or inspired with optimism, Googie went out of fashion in the mid-1960s. It died when the story of our grand future died in the hearts of Americans.

Ray Bradbury's story, The Toynbee Convector, is parable of man's need for a unified dream of a better future. The hero of the story says:

"I was raised in a time, in the sixties, seventies, and eighties, when people had stopped believing in themselves. I saw that disbelief, the reason that no longer gave itself reasons to survive, and was moved, depressed and angered by it... Everywhere was professional despair, intellectual ennui, political cynicism... The impossibility of change was the vogue. . . . Bombarded by dark chaff and no bright seed, what sort of harvest was there for man in the latter part of the incredible twentieth century? Forgotten was the moon, forgotten the red landscapes of Mars, the great eye of Jupiter, the stunning rings of Saturn.

"....Life has always been lying to ourselves... to gently lie and prove the lie true to weave dreams and put brains and ideas and flesh and the truly real beneath the dreams. Everything, finally, is a promise. What seems a lie is a ramshackle need, wishing to be born."

Why did we stop believing our own promises? For indeed, the death of our dreams and optimism also marked the death of Googie and the space age. Certainly, this is a topic that's been flogged to death over the past thirty-some years, but a few of the popular answers follow:

* The assassination of President Kennedy sparked a national loss of innocence.

* The Vietnam War changed our nation's view of itself.

* The Johnson Administration's decision to focus on "Great Society" programs rather than America's great "rendezvous with destiny."

* Baby boomers -- the children of the can-do World War II generation -- hit their late teens and rebelled against their parents' values.

* As the Space Program progressed, Americans became more sophisticated about space travel and "futuristic" technologies. Their view of the "Space Age" was de-romanticized.

Whatever the reasons, no new Googie was built. However, the existing buildings have served their communities well ever since, as bowling alleys, churches, professional centers, coffee shops, motels, car washes, etc. Even those who grew up in the 1970s and 80s are likely to have fond memories of burgers and milkshakes in space-age restaurants, bowling in themed bowling alleys or seeing an aging depiction of the future in Disney's Tomorrowland.

Today, the familiar boomerang arches, tapered columns, cantilevers, parabolas and curved domes are being bulldozed at an alarming rate. These buildings stand at an unfortunate juncture: Not new enough to look modern, yet not old enough to be considered historically significant. As the best examples of the genre disappear, we are loosing not only part of our history, but also the last reminders of our shared dream of a shining future in a better world.

For photos, history, and locations of Googie architecture, check out www.spaceagecity.com/googie/