Sam Van Olffen is truly an icon in the dieselpunk and steampunk art communities. This self-taught DJ of pictures burst onto the scene with the first wave of steampunks and has pushed the envelope with his graphic samplings ever since.

Recently Sam found Dieselpunks as an outlet for his new World War II themed series, presented here on his Dieselpunks blog in early August. Since then, Sam has certainly kept us buzzing with piece after piece of amazing artwork.

I first heard of you, Sam, in August of 2008 when your work was featured alongside Art Donovan, Datamancer, Jos De Vink, Bethany Peters, and Steve Erenberg as part of the Steampunk exhibition in Bridgehampton, New York. I could never imagine the huge scale of your artwork until I saw it printed.
What can you tell us about the exhibition? Who approached you and how did your work end up appearing in the US?

Mr Donovan contacted me after having seen my work. He asked if I would be interested in exhibiting my images in the US, and of course I was! I like the US and it was an honor for me to be represented there. Unfortunately I was not able to make the trip over myself, but as my art was there it was as if part of me was there too, in spirit. A strange sensation indeed. I really hope to work with Mr. Donovan again as it was a very good experience.

It's rare to encounter someone who will give you a chance without knowing you, purely based on the quality of your work. Mr Donovan did this for me and I will always be grateful. Thank you, Art.

When you create your pieces, are they normally as large as they were in the exhibition, or were they oversized just for the show?

In art nothing can be oversized - especially when, as I do, you create with the heart. In their original sizes, Jaques Louis David's Le Sacre de Napoleon, Eugene Delacroix's Liberty Guiding the People and Veronese's Les Noces de Cana are enormous. Bonaparte himself, on seeing Le Sacre remarked to David that, "we could walk in your painting." With 191 characters on a 6m by 10m canvass, what else could he have said? We've moved away from this now though, away from Rembrandt, Van Eyck and Caravaggio - it's almost a forgotten era.

All this to say that I would like the viewer to be able to walk inside my images. It's early now but later... why not? 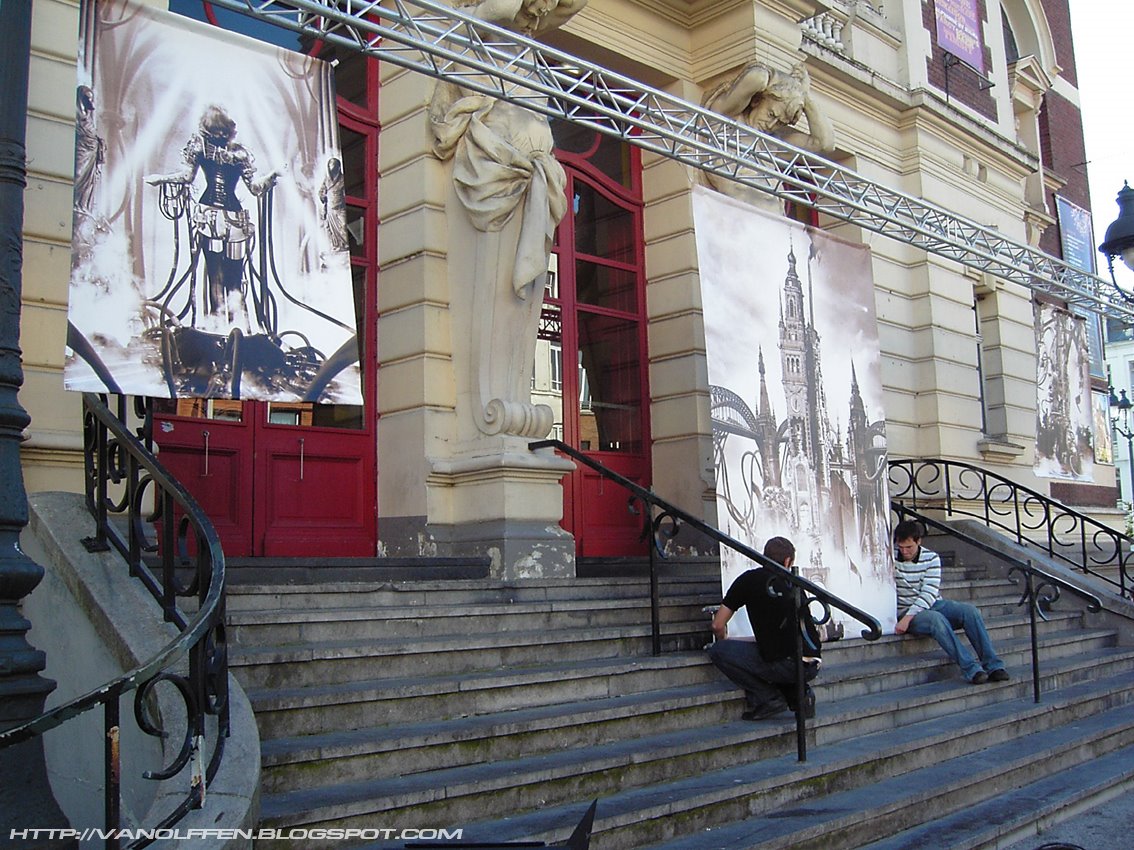 Walk us through the process of making one of your graphic compositions. Where does the idea start, and how does it get from your brain to the computer screen?

This will sound strange but I don't think that anything comes directly from my brain. I'm just a vector, a kind of supra-physical tranlsator. I'm not kidding. I just use information to make pictures, much as a computer makes pictures with binary language. My synapses translate data which comes from I don't know where. That's my role.

Your strongest work, in my opinion, combines classical figures with cyberpunk elements (such as hypertech and post-apocalyptic scenes). What drew you to this style? Do you employ models to help you with your work, or is it all created in the computer?

Did you have any favorite art while growing up?

A few names, though this is by no way an exhaustive list: Simon bisley, Jacques Louis David, Alex Ross and Giger for their visual art; Louis-Ferdinand Celine, Leon Bloy or Victor Hugo for their literature.
However I hope that at 34 I've still yet to grow up.

What can you tell us about your short films? Do they share similar themes with your graphic art? Are they available anywhere on the internet?

Do you mean Raclure & Crevure (Stinky and Stinkier)? No similarity at all! Raclure & Crevure are short films directed with toys, in my home. It's a series of short stories about a drinking and smoking pig and penguin. In thier adventures they fight monsters, travel in time, become rock superstars with their farting and burping tracks, fuck barbies... as you can see, it's not Shakespeare.

There's no dialogue so it is very international. They're so stupid though that I thought no one would be interested and that's why I like them.

I'm very surprised that you've mentioned them. For those who are interested, they're free and they're here: www.raclurecrevure.com. (warning: there's no streaming, so if you want to watch them they must be downloaded)

Your home city of Montpellier, France is a living example of your art style. It is a modern city built upon a beautiful medieval framework. Tell us about your hometown. Where do you travel for inspiration, and where do you go when you want to have fun?

Oh, you know Montpellier? Great! It's where I was born and grew up, and I still live and work here. I like my city even if the general mentality isn't compatible with mine.. Because of the sun probably, as it encourages people to wear black glasses and so they don't see the world as it really is - contrary to the John Carpenter movie, They Live, in which people wore sunglasses and saw that they were controlled by aliens.

The problem here is the summer, as it's so hot that it's almost imposssible to work. Here the sky is very blue, the sun shines every day, the sea is just nearby, and it not unusual to see beautiful women drinking coffee next to you in a city centre cafe. You'd agree - they're not the best working conditions.

But you've come up with a good analysis in that the city has inspired in me an artistic mix of the old and the new: I used architectural elements of Antigone, one of the neo-classical areas of Montpellier, in my image Benitobot Mussolinoid.

Despite my name I'm typically Mediterannean and, apart from trips to Brussels and Amsterdam (why there? probably because of my roots), I don't travel much. But I would like to visit the US, Japan, Russia, even Mars! Anywhere where there are people or ectoplasmic entities that would appreciate my art.

Speaking of fun, what do you do when you're not a slave to your art?

Damn! "Slave to your art" - it's exactly that! Another good analysis. But to answer your question: I waste my time outside, drinking coffee on terraces and people watching. People watching is a very good way to connect the brain with the beyond. As is eating cured saucisson.

What have you been listening to lately and can you recommend any favorite bands?

I'm currently listening to Ez3kiel, a French electro/trip-hop band. They're geniuses, no other way to describe them, and if you're in any doubt listen to Verses or Via from the Versus Tour. I'm also listening to blues artist Otis Taylor. His Few Feet Away literally makes me cry. All that is thirst by Patti Yang is also very good. For those who like rap, I recommend Necro, probably one of the best rappers alive, along with P.O.S. and Sage Francis. K the ?!, Prolyphic and Reanimator are very good too.

Finally, I can't talk about music without mentioning Puppetmastaz, Jacques Brel and of course those living gods, Eminem and Manowar.

You're a very welcome addition to our friends at Dieselpunks. What can we expect to see from you in the future? Are you working on any new pieces?

I'm always working on new pieces, but the creative process takes a long time. I think the next step would be to animate pictures, probably next year.

As I mentioned earlier, we're here to help promote those we see as great artists. Do you take commissions and/or is any of your work for sale?

What can we do to help spread the word about Sam Van Olffen?

Any final words for your fans? 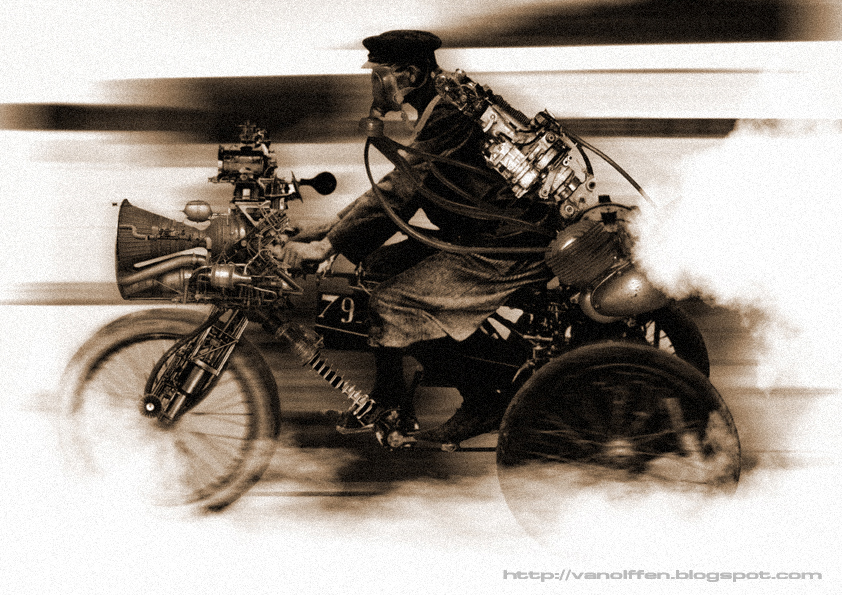 Special thanks to Sam Van Olffen and his translator for their great help in pulling this interview together!
Get in touch with same via his Dieselpunks page and on his blog.

Comment by Ottens on August 30, 2009 at 5:29pm
Please do. I hope you'll enjoy the latest issue! And absolutely, Van Olffen makes some astounding stuff.

Comment by Tome Wilson on August 30, 2009 at 2:40pm
Sam is a great artist and certainly deserves all the press and respect he receives. I'll check out the Gazette.

Comment by Ottens on August 30, 2009 at 2:20pm
Issue 8 of the Gatehouse Gazette is now out. It features an interview with Mr Van Olffen too.