Stefan Prohaczka is a French artist who has quickly made a name for himself in the dieselpunk community. His style of art is unique and in many ways captures dieselpunk like no other. We’re lucky that he’s been a long time member of Dieselpunks and that he has been so kind as to share his art and his thoughts with us. 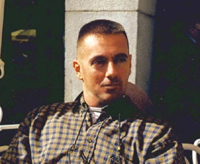 Tell us about yourself. How did you get started in art?

As far as I can remember, since I was a kid, color pencils and gouache were my favorite toys. It seemed, then, that my parents just couldn’t provide enough blank paper to satisfy this early "creative" urge of mine! I recall how I was eagerly waiting each and every week for the day when the laundry came back home freshly clean up and ironed, because it was delivered in a large size white sheet of paper I regularly turned into another one of my weekly masterpieces. But I also had that taste for using scissors and glue, and my Dad’s newspapers as well as my Mom’s magazines all ended as collages of all kinds. So, you see, today, only the used media has changed. It wasn’t that my "creations" then were that good but, in kindergarten and later, they had "something" that made adults say... Oh, it’s stunning ... which wasn’t necessarily a compliment in their own aesthetic standards. Mostly, I had this interest (fascination) for images, illustrations, pictures... all kind of pictures... especially those people usually look at but do not really "see" : ads, posters, banknotes, packaging, tickets, magazines layout, etc... Since then, it never left me.

I’ve been lucky enough to be encouraged on that "creative" path by my parents and, later, the ENSBA in Paris (Ecole Nationale Superieure des Beaux-Arts) seemed to be the right thing for me do. I say "seemed" because, although I’m immensely grateful, today, for the bases of traditional drawing, of architecture and knowledge of history of Art I’ve acquired during my years there, I have to say that I also really got very bored, more often than not, by the academic, classic, stiff way of teaching these things at the ENSBA. You can really grow tired to draw top parts of ancient Greek columns and pears on a plate. Well, it surely opened my mind and curiosity, though, and, without it, I probably wouldn’t have been drawn to digital graphism, later, when.computers began to offer those constantly larger and larger possibilities to graphic designers.

You have a distinctive style. Could you tell us about how you create your art?

Although some of my pictures, mostly the fantasy posters/advertisements, are made of traditional digital graphism only, most of them are made of (sometimes lots of ) parts, elements from vintage photos from the first half of the 20th century, of 3D elements sometimes and a good deal of "traditional" digital drawing, always. Then, it’s all a matter of coloring, adjusting, cutting, pasting... I dislike, though, the word "photo manipulation" that has, at least in French, such a nasty connotation. Much more than the other way around, if something, someone is "manipulated" in this process, it is me. I’m used to say that these photos "find" me, come to me much more than the opposite and, weird as it may sound, while making the pictures you know, I frequently feel I’m "channeling" them. It’s almost like if they were brought to me from some other place, some other time mostly, asking for "another life", for telling something else. OK, enough with this or you’re probably going to think I have a strong tendency to schizophrenia... The sure thing, though, is that nobody could subscribe more enthusiastically than I to our dearest Tome Wilson’s statement, that this whole Dieselpunk thing is all about "to create something unexpected and new by merging the zeitgeist of the past with today’s technology and attitude", to quote his own so clever words.

How do you understand dieselpunk and how does it tie into your artistic creations?

It is really an understatement, I think, to say I’ve always had that interest in "things from the past", from the recent past, that is... and particularly the first half of 20th century, the immediate pre-WWII and the interbellum decades, as well aesthetically, as historically. It certainly strongly influenced my own sense of aesthetic, reflecting upon my graphic work and contributing to shape up my own frame of mind and imagination, fleshing up my inner imaginary universe... those dearest to my heart "Twisted Forties" of mine. So, at one step, just like Moliere’s Monsieur Jourdain in Le Bourgeois Gentilhomme who was making prose unbeknownst of himself, I’ve found myself making Dieselpunk stuff without really knowing I was doing. It has to be said, at this point, that one of the very first one to spot it is no other than the worldly famous Mister Nick Ottens himself. Did it change something about my graphic work to know it belonged to the Dieselpunk genre? Yes, it certainly added enthusiasm and pride to know I wasn’t the only one, while the creativity of other fellows Dieselpunk aficionados, especially writers and novelists, fed the urge in me to design more visuals in turn, and even more... as an attempt to constantly explore deeper and further into these imaginary, alternate universes that weren’t only "mine", anymore, but "ours."

One of the things that fascinates me about Dieselpunk is how close to us it is on the time scale. When I have trouble to visualize or envision myself in fictions, fantasies, alternate universes... from centuries ago, Dieselpunk universe is truly still "almost there" in more than just one way, within the reach of our hand. I’m constantly pestering my parents, asking them about life during the thirties, wartime, etc... All over Europe, either for the best or the worst, there are billions of street corners where you can stand and say to yourself "Wow, this could be 1939 and everything around would be just the same."

Like I already said, I think, although I "can draw", thanks to the countless Greek columns of the ENSBA, I always feel I’m missing the point if doing so, when it comes to Dieselpunk artwork. Like if this just couldn’t be made from scratch, at least by me, but only re-thought, re-interpreted, re-expressed... from "real" elements from the past... the only efficient way to "bridge the gap between history and fantasy", to quote Tome Wilson again. This, plus the fact this visions-from-the-past-re-thinking/re-interpreting... process is achieved through modern computer technology, always looked to me like the most appropriate media for Dieselpunk graphic work creation. Or, in other words, the most Dieselpunk way to make Dieselpunk stuff. Hope all this makes sense to anyone...

What famous artists have influenced you, and how?

My inspiration, the sources of it, like even the blind can see, I guess, proudly come from the vintage Americana, the US pop culture from the 20’s to 50’s... something that never fails to get me weird looks from my French country fellows, in a country that tends to think there is no culture outside its own frontiers... OK, outside Western Europa and certainly no such thing as pop culture, not worthy of any interest, anyway. It actually gets me weird looks from my American friends, too, who always seemed to wonder why the Hell I have a passion (fetish) for these trivial, often kitschy graphic stuff from vintage America, all of them... ads, comics, signage, posters, marquees lettering, signs, font letters... As a matter of fact, the largest majority of visual artists the work of I admire and I’m inspired by are Americans, ranging from illustrators like Leyendecker, Rockwell, Parrish... to painters like Hopper, Sheeler, the hyper realists Estes, Cottingham... to photographers like Stieglitz an all the greatest American movies makers from the Golden Age of cinema, just to quote a few. I couldn’t mention them all, but they keep on being so, so inspirational to me, at least in some subconscious way and yes... they’re all Americans. I guess I’m somehow American by heart, even if, as shown in some of my pictures, the French pre-WWII era aesthetic often tickles my inspiration, too. Paris, in its own way, has some very Dieselpunk places to wander in.

What other interests do you have outside of painting?

Creating digital graphism, from collecting documentation of all kinds from the most various sources, to achieving what some have called my "complex pieces" is an extremely time consuming activity which, honestly, leaves few time to other interests. But then again, that’s what a passion is all about and there is almost not a day when I do not try some new graphic effect, some weird association I hadn’t think of so far... and lots of nights when I wake up in the middle of the night, thinking ... I should have added a shadow there, in the background of this picture! The only option I’m left with then, if I want to peacefully get back to sleep in the end, is to switch on again my computer and add the desired shadow on this picture in the making. But, interests, even if I can’t indulge myself in them as much as I would like to, yes, I sure have: vintage films and music, fictions by the numerous talented Dieselpunk writers on the internet and else, the countless 20th century-themed exhibitions Paris offers all year round... I’m mostly a city slicker, I guess, extremely receptive to urban moods and atmospheres, much more so than to the beauties of Nature. My loss.

Where do you see yourself in 10 years?

Well, my idea of making plans about the future never went any further than doing grocery shopping for the next week, so... 10 years, really...

What advice would you give to an artist just starting out?

Comment by Stefan on December 4, 2010 at 6:00pm
Thank you so much, everybody, for your continued interest in what I do. It means more to me than I could possibly say. Let me say again that I found in the Dieselpunks community more than "just" friends, but soul mates, really. The honor and gratitude are all mine, Larry for your time and interest and Tome, for the great work about the online layout of these ramblings, with the nice slide shows and all.

Comment by Tome Wilson on December 4, 2010 at 12:06pm
I am constantly amazed, not only by the quality and imagination in Stefan's works, but also with the alacrity in which he produces new art. That shows a level of devotion that I truly admire, and I hope to see more work in the future.

On a side note, Stefan, when can we start buying prints? My walls are bare!

Comment by Hayen Mill on December 4, 2010 at 9:52am
Great work to both of you! Finally an interview of our dearest member Stefan!

Comment by lord_k on December 4, 2010 at 4:08am
Let me express my warmest gratitude to both of you, gentlemen. A fascinating interview.