The very popular DJs and style icons the Broken Hearts host Peppermint Candy on Jazz FM weekly. Their program, while not labeled ‘dieselpunk’, certainly could be described as such with it mix of classic swing artists such as Ella Fitzgerald and Duke Ellington along with contemporary swing bands such as Big Bad Voodoo Daddy and Caravan Palace. During their radio program, they include trivia such as Jazz Era swing lingo as well how the Jazz Era has influenced our contemporary times. They’ve also released a CD of both classic and contemporary swing music titled Peppermint Candy. Recently Amber and Nisha of the Broken Hearts were kind enough to take time from their busy schedule to provide this interview for Dieselpunks.Org. 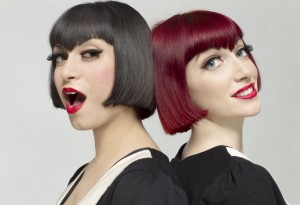 Nisha and Amber, many of the members of our forum are fans of the two of you through your program, Peppermint Candy on JazzFm. Would you be so kind as to tell us a little about yourselves?

We’re Nisha and Amber, the Broken Hearts, and predominantly we’re DJs – both live and on the radio. But on top of that we’ve created sound tracks for silent films, recorded songs using a live tap dancer as a beat and made our own music video where we starred as Vaudevillian magicians. We’ve also designed clothes inspired by sideshows, made films about the history of the circus and concocted Halloween-themed Afternoon Teas. We’ve even been Hula Hoop assistants! Also we both used to work for Beyond Retro (biggest vintage store in London) – Nisha was head of press and Amber was the buyer, so we ended up spending a lot of time together through that.

The most popular description of Dieselpunk is “a style that blends the art and culture of the 1920s -1950s with today.” Would you say that this is also an accurate description of the theme of the Broken Hearts?

We like to use the present as a gateway to the past, especially for our radio show - so we take contemporary events that might have a historical element, like a book being published that's set in the 20s, or a fashion show that references the 30s - and we use that to link back to those earlier eras. So we're very much rooted in the contemporary, but always referencing the past! We've always loved Swing music, which we first got into from listening to our parents' record collections - Amber's dad  was actually a jazz drummer who played at Ronnie Scotts! Our first DJ gigs were at 1920s-1940s parties so we have plenty of practice playing this kind of music at clubs and events too.

Beyond your obvious interest in Swing music, are there other aspects of the 20s through 40s that intrigue you?

Yes all aspects - we're especially interested in design history and social history so any of those factors hold appeal for us too. So we love the decadence of Poiret's clothing designs in the teens and 20s, but also the sludgy colours and beautiful shapes of Biba in the 70s. Music-wise, we couldn't possibly choose just one decade either! At the moment our favourites to play when we DJ tend to include Harry Belafonte, M.I.A, Beastie Boys, Rose Murphy and the Shangri-Las. But we also have some great Japanese 60s girl group pop, Azerbaijani folk music and Bollywood hits from the 60s and 70s that feature.

Do you have any projects in the works that your fans should watch for?

We've just finished making some videos for cosmetics company Barry M that should be online in the new year. It was a great project as we got to interview a lot of girls that we think are particularly inspiring, from a plus size model to a professional hoola hooper. Keep posted for details of where and when they'll be shown! You can keep up to date with us on Twitter.

Their most recent episode is archived at the Jazz FM web site.

You can visit the official Broken Heart Web Site here.