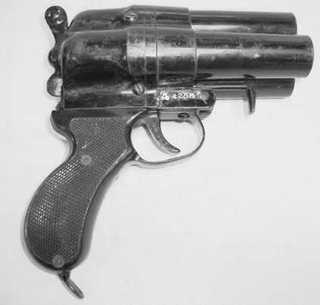 The Japanese Nambu Type 90 flare gun is one odd looking pistol. Weighing in at almost four pounds, the Nambu flare gun was designed for the Japanese Imperial Navy. Called the Type 90 (for the Japanese calendar year it was created) it was a 28mm flare gun.

There are four different levers and controls on this simple pistol. The first is a release lever on the right lower barrel. Pulling it forward releases the break-top barrels to facilitate loading. Now, the flares that go in the Nambu can't just be loaded in which ever barrel you wanted. Nope. The designers of the Type 90 color-coded the barrels with each specific flare color used by the Imperial Navy.

The top barrel was striped for a white flare. Green was loaded in the right barrel and the left barrel held a red flare.

Once loaded the breach was flipped up and locked in place. A butterfly knob at the rear of the pistol was turned counterclockwise to arm the gun. To fire the pistol you needed to select the barrel and flick the safety into the off position.

Barrel selection was achieved with the fourth control lever. Located below the butterfly knob and above the pistol grip
tang was a three position switch. Rotating it right allowed the operator to fire the right barrel. Central position fired the white top/center barrel and moving the switch to left armed the red flare barrel. 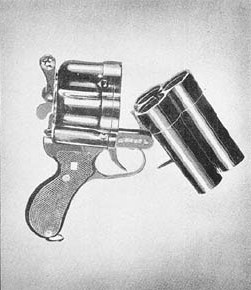