Here I feel like invading Redfezwriter's realm but hope we won't fight about a gun. Let's open an old but still excellent book, "The Machine Gun" by Lt.-Col. George M. Chinn, USMC, to learn the Davis gun story:

When representatives of the great powers affixed their signatures to the treaty in St. Petersburg, Russia, in 1868, their main purpose was to eliminate the possibility of using explosive and purposely deformed bullets on personnel in warfare. In order to insure that no such projectiles be employed against the individual soldier, they collectively agreed to set 450 grams as the legal minimum weight for a projectile and its explosive content.

This simple specification made it impossible for any nation to put a bursting charge in any bullet of small dimensions. In fact, at this time no firearm existed which could utilize successfully a projectile based on these figures. The humanitarian intentions of the delegates who attended the convention resulted in a great restriction on aircraft armament all though World War I. For any plane that carried guns other than those in the rifle-caliber class had either to use a solid nonexploding projectile or mount at least a 37-mm cannon. As the cannon's slow rate of fire did not warrant employment of the nonexplosive shot, armament designers turned their attention to adapting shrapnel-firing cannon to the flimsy aircraft of the time. As a result, World War I saw aircraft weapons with bores equal in size to those used in another war some 25 years later. 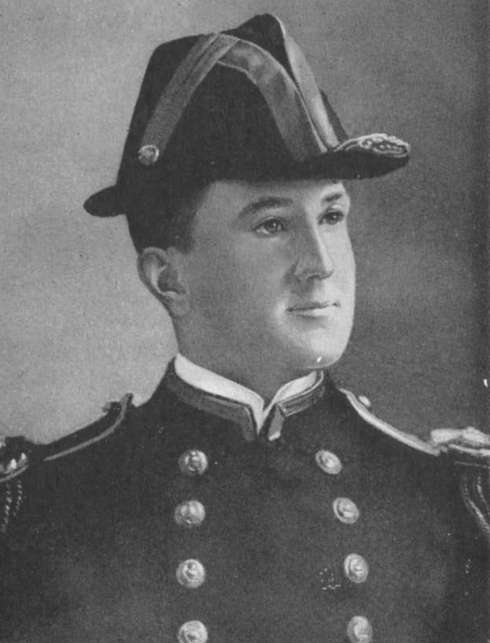 Cleland Davis when he was a Lieutenant, USN

The first recorded method of firing an artillery piece in the air was the invention of Commander Cleland Davis, an Annapolis graduate with a brilliant career, including a citation for bravery in commanding machine gunners in the Manila campaign of 1899. His simple but unorthodox idea was so far advanced beyond the times that it reappeared as a "new discovery" in the latter days of World War II. In attempting to overcome the terrific recoil forces of artillery mounted in aircraft, he applied on 22 August 1911, for a basic patent on recoilless artillery and electric primer ignition. His wording in the patent claims bears repeating in order to show just how prophetic his conception was:

"It having been demonstrated that it is practicable to navigate the air under normal atmospheric conditions, and while as yet the practice is too hazardous for ordinary commercial purposes, still aircraft have already become a part of the military equipment of most of the civilized nations ... They have, however, so far developed little, if any, offensive value, it being practically impossible to strike a comparatively small target, such as the deck of a battleship, the vulnerable part of a fort, or even a large building, by merely dropping explosive from a high altitude ... Furthermore, the mere dropping of a high explosive on the deck of a ship, or a fort, would occasion very small damage, for the force of the explosive would ordinarily, aboard ship, be confined to the region above the protective deck and little damage would be done ...

"In order for a gun to be effective for such purposes, it must comply with the following conditions:

In order to meet the above condition, I have devised the apparatus ... to which reference will now be had ... ." 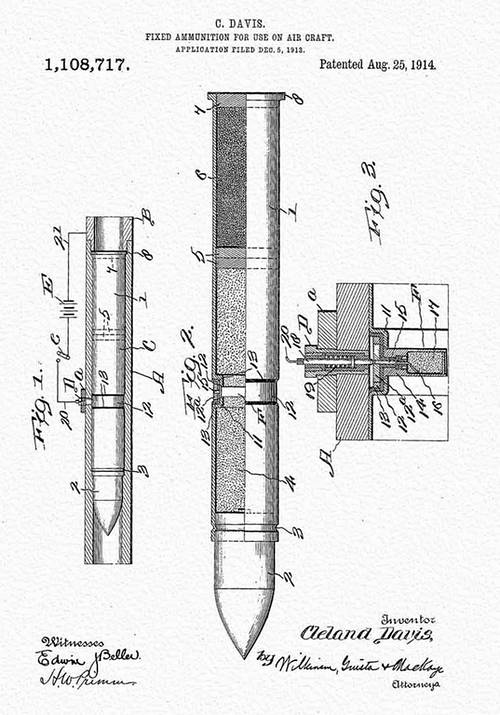 By this arrangement of having the projectile and gun bring forces in opposite directions, a comparatively small amount of shock would be brought on the framework of the airplane. The resistance to the rearward travel of the gun in its sleeve obviously would be approximately equal to the resistance of the projectile in its passage through the bore of the gun. Then these two forces would neutralize each other, thereby relieving the gun support of any heavy strain.

Commander Davis did not stop with the conception of this novel weapon, as he demonstrated a working model at the United States Naval Academy at Annapolis, Md., several years before he actually put what he considered a perfected recoilless cannon into production. A Davis gun mounted on a naval seaplane.
The gunner has pivoted the breech to the open position for loading

The Scientific American on 21 April 1917, after its reporter had witnessed a factory demonstration of the weapon, published a glowing account of what it would make possible in aircraft use. In conclusion, the possibility it would offer as artillery for ground troops was described:

"Nonrecoiling guns of large size may also be mounted upon dirigibles, armored cars, or actually be carried by hand, greatly increasing offensive power without increasing the size of the vehicle or impairing the mobility of the infantryman in any way."

Like numerous other inventions of radical design, the possibilities of this new kind of aviation cannon were not realized except to offer a token demonstration of its capabilities during the last days of the war. On 2 August 1917, the largest gun yet fired from an airplane in America was tried out at the Curtiss Aircraft Co.'s testing range at Buffalo, N. Y. The weapon was a 75-mm Davis nonrecoiling gun, manufactured by the General Ordnance Co. of Derby, Conn. It was mounted at the front of the cockpit of a Curtiss J-N twin tractor operated by a factory test pilot, named Carlstrom, the company's representative, Mr. F. B. Towle, acting as gunner.

This pioneer performance of firing successfully such a large cannon from an airplane caused considerable comment in the newspapers and predictions of its effect on all artillery were freely made. 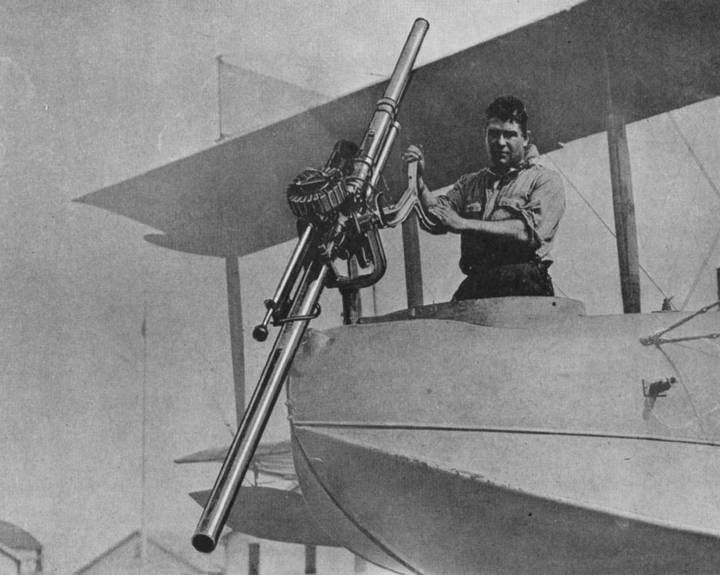 The velocity given for the big projectile was 1,175 feet per second and its accuracy was as good as that expected from a rifled barrel. A unique means of sighting the gun was employed. A Lewis gun was fastened on top and in the middle of the long tube and, as the pilot approached within range of the target, the gunner pressed one of a dual-trigger arrangement. This fired the Lewis gun and the gunner could observe where his bullets were hitting. When he had corrected his aim, by watching the bullets strike, until he felt he was on the target, the lower trigger was pulled back and by means of electric ignition the large cartridge in the Davis cannon was fired. This type of sighting was especially effective against submarines.

The Navy, which alone of the military services showed interest in the cannon, mounted it on seaplanes in three different calibers, 47-mm, 65-mm, and 75-mm, firing from six- to nine-pound projectiles. The Davis gun was distinctly an American Naval accomplishment, in that none of similar construction were developed, or even experimented with, by any other nation during the war. Both France and England were furnished the recoilless cannon by the Navy and it was put to limited use during the conflict. The Army made no attempt to utilize it as a land gun.

Actually the Davis gun practically dropped out of existence with the signing of the Armistice only to be rediscovered at a later date. During the course of World War II both the United States and Germany were working on secret projects relating to recoilless artillery. An American Army adaptation of the Davis gun was put in operation, called the recoilless rifle. It was used effectively as highly portable artillery.

Rheinmetall-Borsig developed two types of the Davis gun. The first (the Device 104) had a bore of 14 inches. It fired forward a naval gun projectile of armor-piercing type, weighing 1,500 pounds, and ejecting backwards, as the counterrecoiling projectile, a cartridge case of the same weight. Its muzzle velocity was over 1,000 feet a second. The whole round was loaded on the ground. The tube was 37 feet long and the complete unit (tube, projectile, and cartridge case) weighed 7,500 pounds. Its function was to improve the striking power of aircraft against capital ships. The cannon was mounted on a Dornier 217 attack plane.

The Davis Principle applied in World War II.
The Germans attempted firing a 1500-pound shell from this Dornier 217

The main difficulty the Germans experienced resulted from the muzzle blast. To lead the blast away from the fuselage, a deflector was fitted to each end, but even this did not prove sufficient and armor had to be installed on the bottom of the plane.

More on Davis gun and ammunition

It's not me, it's the book. Your welcome message is much appreciated, Sir.

Comment by Jake Holman Jr. on March 27, 2011 at 7:06pm
Great piece Lord K. When it comes to aircraft weapons, it amazes the types and sizes of ordnance they've attempted to hang off or stuff into a fuselage. Reminds me of the 75mm cannon I wrote about in the Airborne Tank. And of course, the pictures show my favorite, the Lewis gun mounted to the Davis. Well done and welcome to the Big Bore Writing Club.

I hold a medal from the U.S. Army Medical Department, but it doesn't do me any good, it just sits in my desk drawer. Even so, I'm proud of what I did to earn it. Which, luckily for me, didn't involve being the nose gunner in a flimsy wood-and-canvas airplane.

Comment by Pilsner Panther on March 27, 2011 at 10:20am
Lord K., I really enjoy all the military history stuff, so please keep it coming... it's one of the main reasons why I'm here. I suppose that you can take the boy out of the Army, but you can never take the Army out of the boy. Very true, with me.

What would you say about French 75mm Scheider gun mounted on a WWI biplane? We'll see it in a couple of weeks.

Comment by Pilsner Panther on March 27, 2011 at 7:10am
Being the forward Davis gunner looks like it was a g-damned dangerous job, to say the least. Any fighter plane pilot who got within range would of course try to blow the nose off the bomber in order to destroy that gun. It also looks like it took plenty of muscle to load and to aim it! Warfare was very primitive back then, but the fact that it's now "advanced" really doesn't make it any more admirable as a human endeavor.