Knights of the Air: Dicta Boelcke 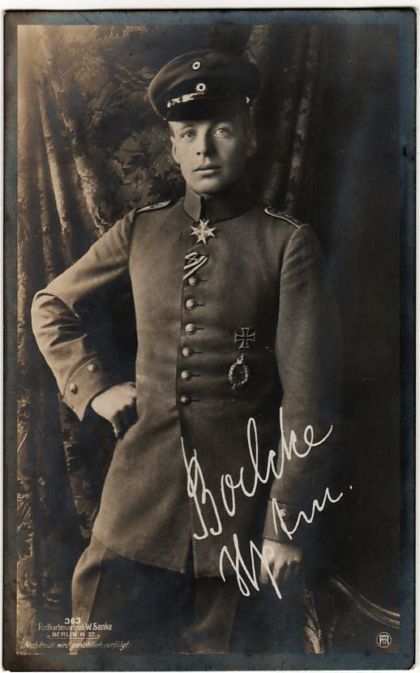 Boelcke flew the first Fokker E.I, won the Pour le Mérite, commanded Jasta 2, mentored many younger German fliers, and was even decorated by the French for rescuing a child from drowning.

He was born in 1891, son of a schoolteacher. His older brothers, Wilhelm and Friederich, had been born in Argentina, but by 1891, the Boelcke family had returned to Halle, Germany. Both studious and athletic as a youth, Oswald excelled at mathematics and physics, and also took up swimming, tennis, rowing, and gymnastics. Imbued with German nationalism and militarism from his father, young Oswald took the outrageous step of writing Kaiser Wilhelm directly for an appointment to military school - at the age of thirteen.

He joined the military and at Darmstadt first encountered the aviation branch, which he joined as an NCO pilot. His older brother Wilhelm also joined the aviation service, as an NCO observer. (In those early days, observers had more status than pilots, who were likened to mere chauffeurs.) Both were decorated in the first year of the war. 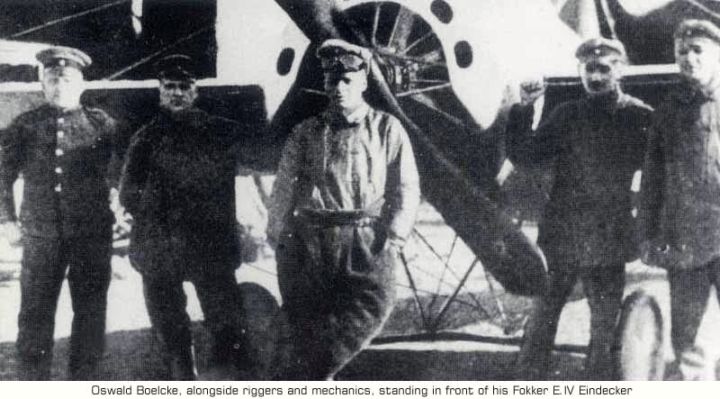 After a bout with bronchial illness, in early 1915 Oswald Boelcke was assigned to the newly formed aviation Section 62 at Döberitz. Here, Tony Fokker first demonstrated his first E-I monoplane, Eindecker, equipped with a fixed Spandau machine gun, which fired forward through the propeller arc, thanks to an interrupter mechanism. As related in the Immelmann article, the two of them shortly went after some British bombers and Immelmann shot one down. The so-called "Fokker Scourge" had begun. 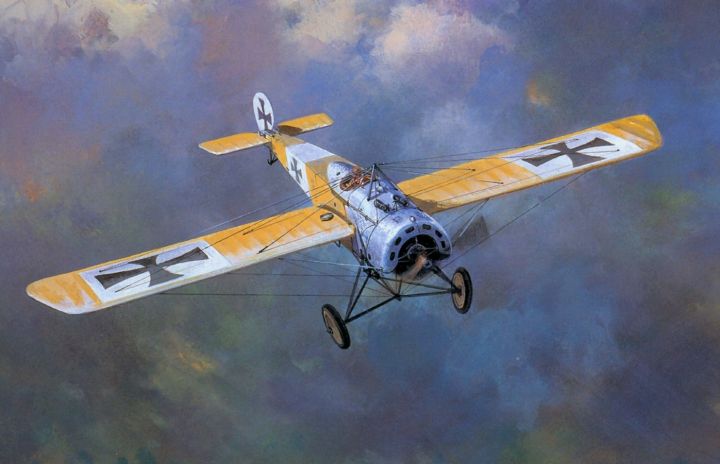 Boelcke downed five enemy aircraft by the end of 1915, while flying the Fokker monoplane. Despite its revolutionary armament, German pilots never really liked the Fokker, and when Halberstadt and Albatros introduced new biplanes in early 1916, these were eagerly adopted. The French Nieuport 11 and the British pusher biplanes were giving the Germans trouble, and Boelcke focused on tactics to counter them: accurate gunnery, tight formations, and staying within the German lines 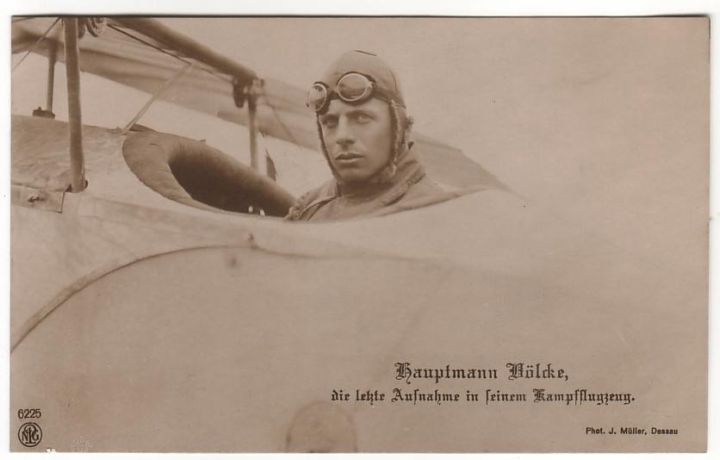 In January, 1916, Boelcke downed four more airplanes, including a Vickers F.B.5 "Gunbus," a two-seater pusher biplane (an arrangement favored by British designers early in the war). Boelcke was unfamiliar with the Gunbus, and it surprised him with its maneuverability. He backed off and tried again; the two planes twisted and turned for half an hour, gradually losing altitude. When over Boelcke's airdrome at Douai, the British flier finally made his mistake, and Boelcke shot him down. He was decorated with the Pour le Mérite shortly after this. It was also at this time that Boelcke rescued the French schoolboy from the canal, for which he was awarded the French Life Saving Medal a few months later 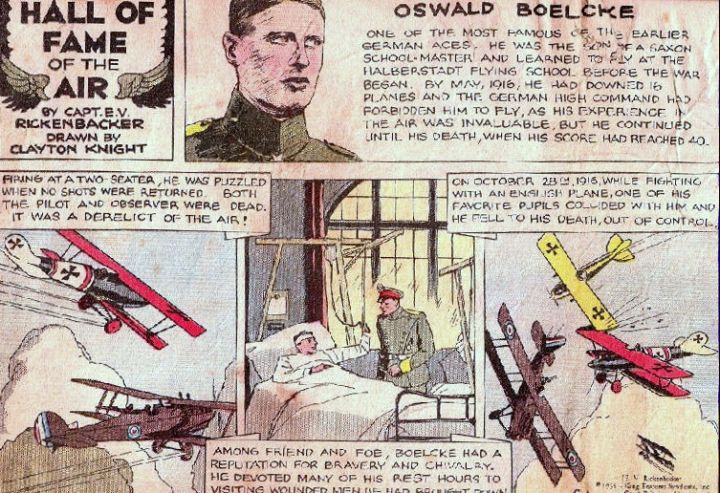 In preparation for a huge German offensive, Boelcke's jasta (jagdstaffel or fighter squadron) was moved to Verdun, where they were expected to emphasize reconnaissance and bombing missions. On March 13, Boelcke spotted a Voisin lagging its formation, and he moved in for the kill. The biplane was fluttered and began to spin, then it slid off into a cloud. When it emerged, its terrified gunner/observer had clambered out onto the wing, in a desperate effort to stabilize it. Normally fighter pilots don't have much compassion for their foes, but Boelcke was horrified to see the Voisin suddenly lurch and cast the poor man into empty space. 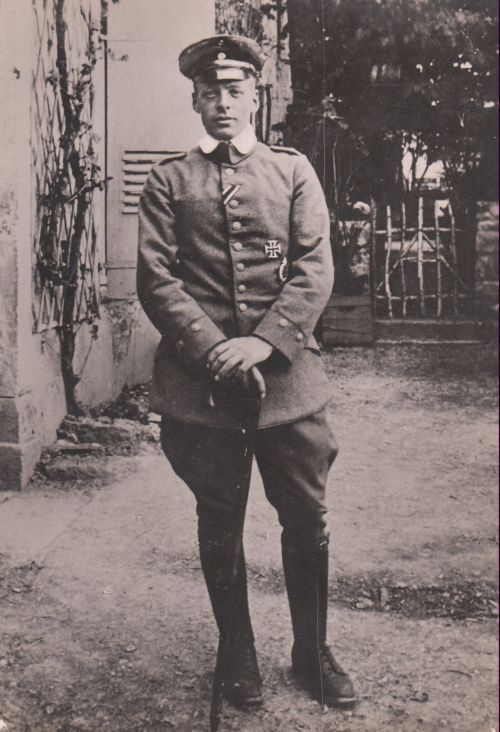 In the next few days, Boelcke shot down three Farmans, raising his score to thirteen. He and Immelmann continued their friendly rivalry until June of 1916, when Immelmann, then with 15 victories, was killed. 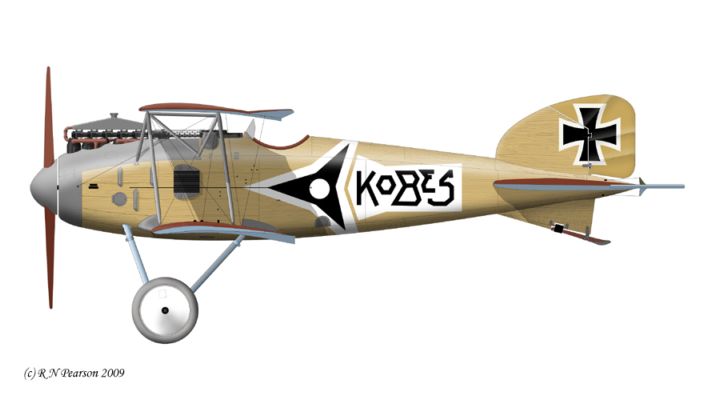 In September, 1916, Boelcke was given command of a new fighter squadron, Jasta 2. Even while assuming new administrative duties, and while tasked with solving the tactical problem posed by British two-seaters, Boelcke shot down eleven British planes in September. He had recently recruited Manfred von Richthofen, a promising Albatros two-seater pilot. Jasta 2, equipped with the new Albatros D.II (above), began flying over the Somme battlefield on September 17. The D.II was a shark-nosed biplane, light but tough, powered by a 160 HP in-line Mercedes, that carried two synchronized Spandau machine guns. 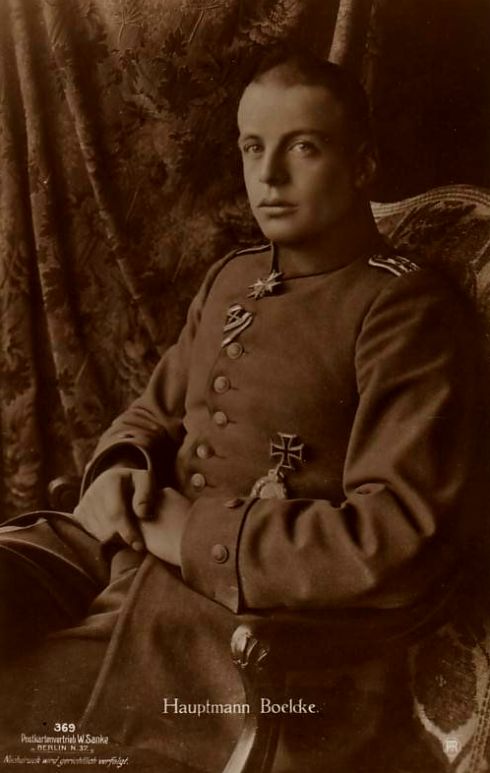 Boelcke and his pilots only flew in large, well-organized formations, dubbed "circuses." Any Allied plane that came within their section of the sky was doomed. Even as his own score grew to 40, Boelcke cared little for his personal record.

He explained, "Everything depends on sticking together when the Staffel goes into battle. It does not matter who actually scores the victory as long as the Staffel wins." He focused on drilling novices, instructing flight leaders, and refining fighter tactics. He wrote and sketched his ideas, delivered them in person throughout German air bases, and helped to form new Jastas, staffed by leaders imbued with his ideas.

Some of Boelcke's rules for aerial combat:

On October 28, 1916, Boelcke was leading a formation of six Albatroses in an attack on some D.H.2s. Von Richthofen and Erwin Boehme, another talented flier, were with him. As they maneuvered against the D.H.2s, Boehme's plane collided with Boelcke's, his wing slicing the upper-wing struts of Boelcke's Albatros. Instantly, the wing folded up and the plane dove into the ground. Boehme was devasted, but was prevented from killing himself; he went on to shoot down 24 Allied planes and to receive the Pour le Mérite himself. 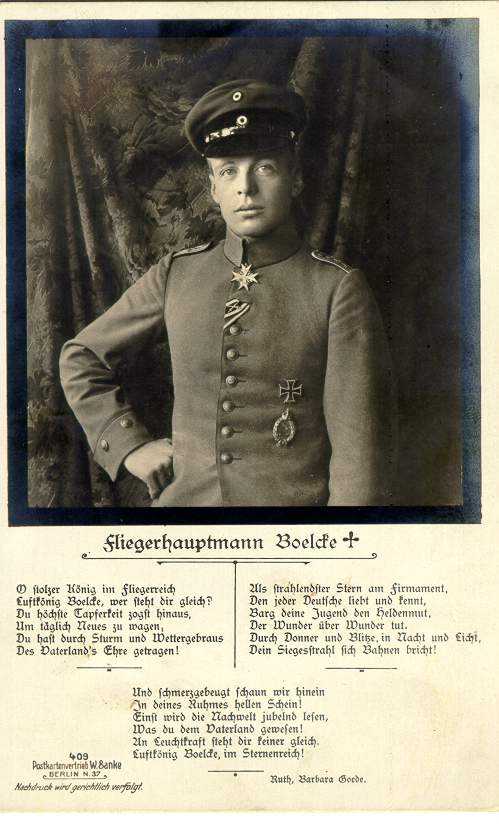 Oswald Boelcke was buried in the cathedral at Cambrai, with senior German officers and nobility present. Even British POW's at Osnabrück sent a card.