René Paul Fonck (1894-1953) was the Allies' most successful  fighter pilot of World War One, and also the highest-scoring survivor of the war. 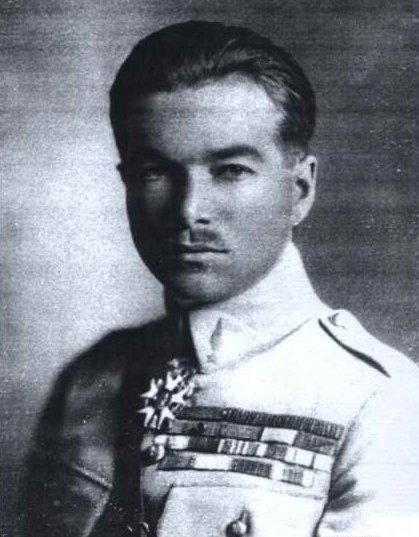 He was born on March 27, 1894, in Saulcy-sur-Merthe, a typical French village in the mountainous Vosges region. At 20, when the war started, he was assigned to the engineers and spent several months digging trenches, building bridges, and fixing roads.

In early 1915, he entered flight training, first at Saint-Cyr, then at Le Crotoy. His first combat unit was Escadrille Caudron 47 at Corcieux, flying a Caudron G.4 (an ungainly-looking bomber/reconnaissance plane: a twin-engined biplane, with a pilot nacelle instead of a full-length fuselage).

He did fine work as an observation pilot, twice being mentioned in dispatches. He shot down his first enemy aircraft in July 1916, in a Caudron that had been fitted with a machine gun. But in his greatest feat in a G.4, he didn't fire a weapon at all. On August 6, he attacked a German Rumpler C-III. Maneuvering over and around the reconnaissance plane, he skillfully stayed out of its field of fire, while continually forcing it lower and lower. Eventually, the German had to land behind French lines; Fonck had captured a new, undamaged prize for the Allies to inspect. Following this, Fonck was transferred to Escadrille Spad 103, Les Cigognes, the Storks, France's premier fighter groups, comprised of escadrilles S.3, S.26, S.73, and S.103. After several months of training in single-seaters, he began flying Spads in May, 1917.

In less than two weeks, he became an ace. By the fall of 1917, he had downed 18 German planes, and was inducted into the Legion of Honor. 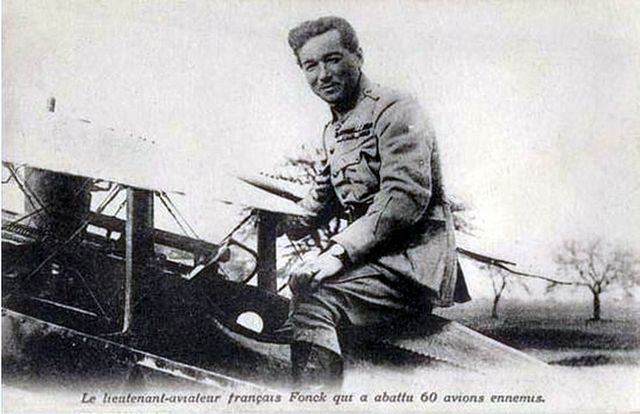 Always anxious to prove his claims, on September 14, he recovered the barograph from an aircraft he had shot down. The instrument confirmed Fonck's rendition of the encounter, showing that the German plane had reached 20,000 feet, had maneuvered lower while dueling Fonck, had zoomed up briefly at 5,000 feet (as the pilot pulled back on the stick when hit), and then had stalled and crashed.

The great French ace, Georges Guynemer, disappeared on September 11. The Germans claimed that he was shot down by Kurt Wisseman, a Rumpler pilot, and a good one, as he was credited with five kills while flying the two-seaters. Shortly, Fonck achieved a measure of revenge for the French Aviation militaire. On the 30th, he spotted a two-seater flying at 9,000 feet. Sensing that the rear gunner was alert to him, he expertly moved in below and behind, where he could not be fired on. Fonck fired two bursts. The Rumpler fell inside the French lines and the dead pilot's papers identified him as Kurt Wisseman. He told a journalist that by killing "the murderer of my good friend," he had become "the tool of retribution."* This statement might have surprised the dead Guynemer, since he and Fonck were never friends. 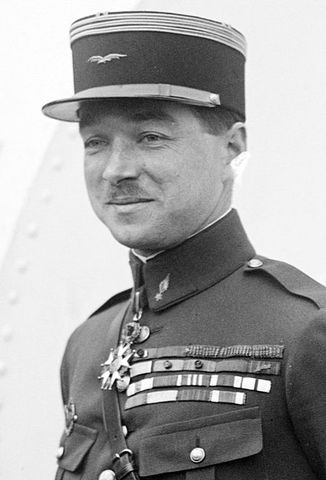 One book referred to Fonck as "a dreadful show-off, intolerable, always bragging, egotistical, ham-like, a poseur, gaudy, loud, hard to take, expressionless at times, morose, deliberately cruel, over-neat, tightly tailored, etc." Even his best friend, Lt. Claude Haegelen (a 22 victory ace), was quoted as saying of Fonck: "He is not a truthful man. He is a tiresome braggart, and even a bore, but in the air, a slashing rapier, a steel blade tempered with unblemished courage and priceless skill. ... But afterwards he can't forget how he rescued you, nor let you forget it. He can almost make you wish he hadn't helped you in the first place."

A brilliant shooter rather than an accomplished pilot (and reputed for his conservative use of ammunition), Fonck claimed no fewer than six victories in a single day, all German aircraft on 9 May 1918 over Montdidier (a feat he was later to repeat). 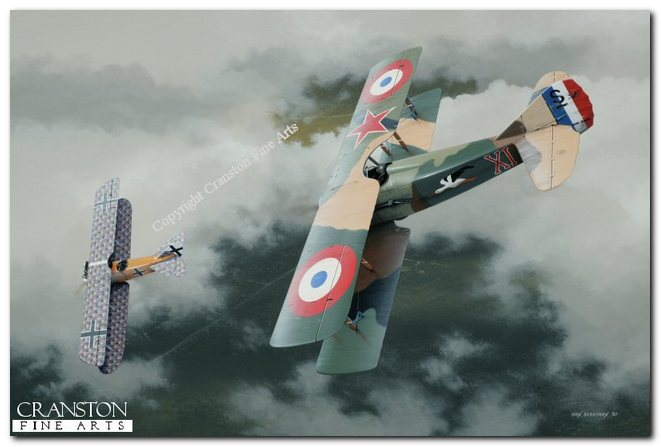 Capitaine Rene Fonck is shown in one of his Spad S.XIIIs chasing down a DFW C-Type

Powered by a Hispano-Suiza 235 HP engine, capable of 138 MPH, the Spad S.XIII was the fastest aircraft of World War I. It weighed 1,800 pounds and was considered to be very rugged for that era. It carried two synchronized machine guns. The French built 8,472 of the S.XIII and it was the superior fighter plane for the remaining 18 months of the war. Fonck scored most of his kills in a Spad S.XIII.

His tally by the close of the war, 75, made him not only the highest scoring French and Allied ace, but also the most successful fighter pilot to survive the war.  Never an especially modest man, Fonck personally claimed to have downed some 127 aircraft - at least - during his service.

Not only walked away. He was the Directeur de Chasse (Fighter Force Commander), French Armee de l'Air, till 1939. He also tried to cross the Atlantic (Paris - New York route) together with Igor Sikorsky in 1920s, but that's another story.

75 confirmed, and he walked away after the war?  Amazing work, even if he was a sociopath.

I guess you needed to be a little crazy to be a pilot in those days, let alone one with a gun.