Knights of the Air: Sikorsky Superbomber

Today, the first dedicated multi-engine bomber of the Great War: The Ilya Muromets (Sikorsky S-22) was designed and constructed by Igor Sikorsky at the Russo-Baltic Railcar Factory (RBVZ) in Riga in 1913. It was based on his earlier S-21 Le Grand Baltique (later renamed Russky Vityaz i.e. Russian Knight) which had played an important role in the development of Russian aviation and the multi-engine aircraft design all over the world. 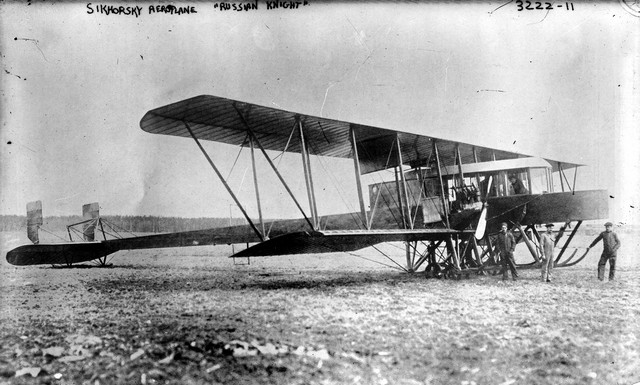 Russia had a chance to become the birthplace of the first multi-passenger and multi-engine airliner. The Ilya Muromets, named after the ancient "superhero" (literally Elijah of Murom) who personified strength in Russian folk tales, was built as a luxurious transport aircraft, not without a thought of future Arctic expeditions. With its 98-ft wingspan it was the first-ever airplane to have an insulated passenger saloon, comfortable wicker chairs, a bedroom, a lounge and even the first airborne toilet. The aircraft also had heating and electric lighting. The S-22 cockpit was spacious, and openings on both sides of the fuselage permitted mechanics to climb out onto the wings to service the engines in flight. Hatch on the left side provided an exit to the front bridge. Behind the cockpit was a large passenger cabin with four large windows on each side. Placed at the rear was a stairway to the upper bridge and a washroom. Further back was a private cabin which included a berth, small table and a cabinet. Lighting was provided by a wind driven generator and heating was supplied by two long engine exhaust pipes which passed through the corners of the cabin. 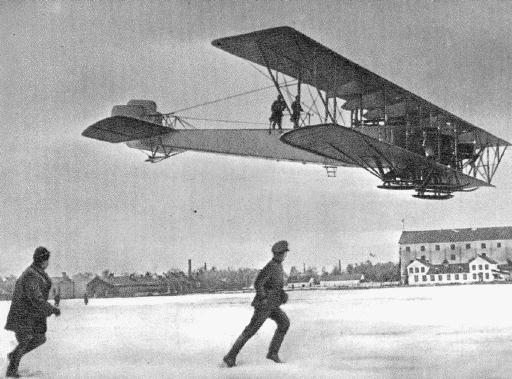 On 10 December 1913, the Ilya Muromets was tested in the air for the first time, and on 25 February 1914, took off for its first demonstration flight with 16 passengers aboard. From 21 to 23 June, it set a world record by making a return flight from St Petersburg to Kiev, a distance of some 1200 km, and back. The first leg took 14 hours and 38 minutes with one landing for fuel - at Orsha, and the return one, with a fuel stop at Novosokolniki, took even less time, some 13 hours. 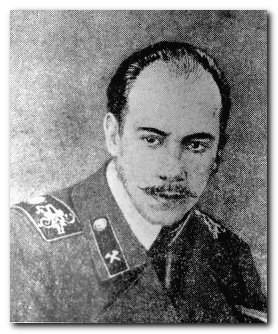 With the beginning of World War I, Sikorsky (see portrait above) decided to change the design of the aircraft to become the world's first purpose-designed bomber. Internal racks carried up to 800 kg of bombs, and positions for up to nine machine guns were added for self-defense. The engines were protected with thin (5mm) armor. 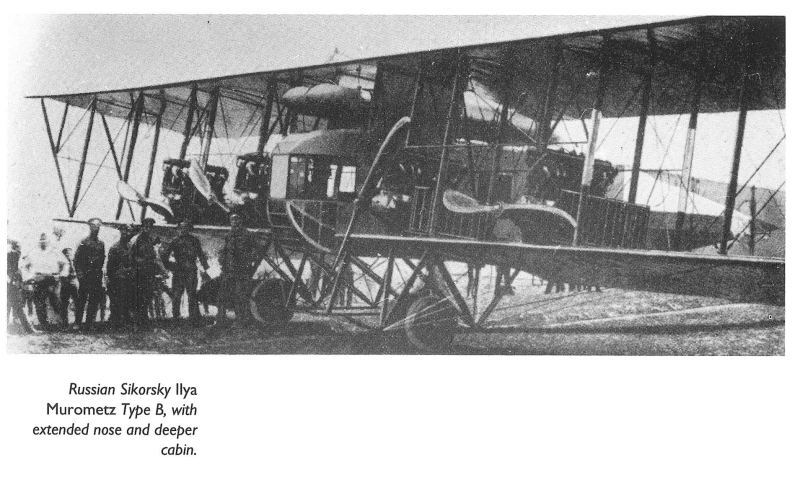 In August 1914, the Ilya Muromets was adopted by the Imperial Russian Air Force. On 10 December 1914, the Russians formed their first 10-bomber squadron, slowly increasing the number to 20 by the summer of 1916. During World War I, the Germans often refused to attack Ilya Muromets in the air due to their defensive firepower. On 12 September 1916, the Russians lost their first Muromets in a fight with four German Albatros fighters, not before it managed to shoot down three of them. This was also the only loss to enemy action during the war, while three others were damaged in combat, but managed to return to base to be repaired. 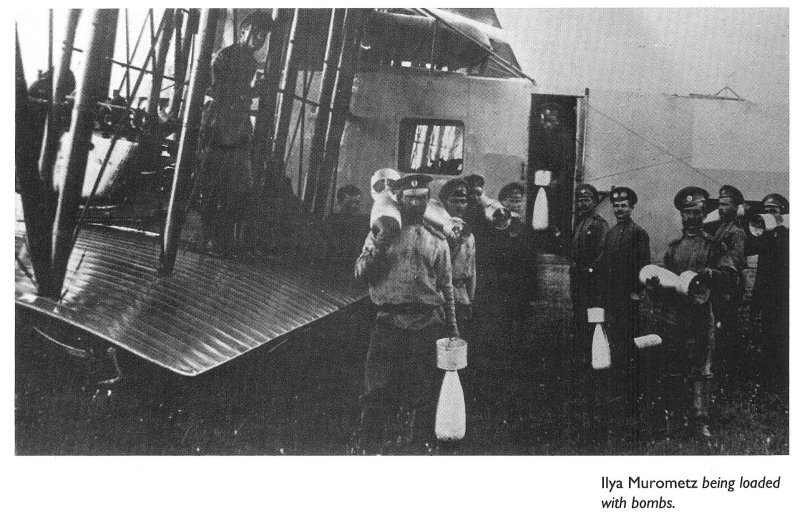 There was an early (1914) navalized version on floats, fitted with 200 h.p. Salmson engines instead of 100 h. p. Arguses. It was destroyed by its crew in the first days of Great War, when a number of "German destroyers" approached the Isle of Esel (as it appeared later, the ships were not German, but the plane had been already consumed by fire). 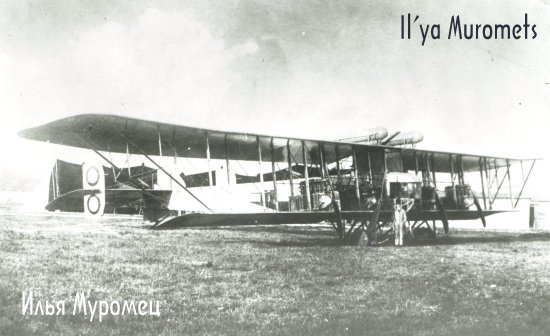 Sikorsky bomber inspired German multi-engine R-planes that deserve a special chapter in the Knights of the Air story. The Russians built 73 Ilya Muromets bombers between 1913 and 1918. During this period, the Russians were the first to perform bombing from heavy bombers, bomber group raids on enemy targets, night bombing and photographic bomb damage assessment. They were also the first to develop defensive tactics for a single bomber engaged in an air combat with a number of enemy fighters. Due to systematic weapon upgrades, the effectiveness of bomb-dropping reached 90%. The bombers performed more than 400 sorties and dropped 65 tons of bombs during the war. 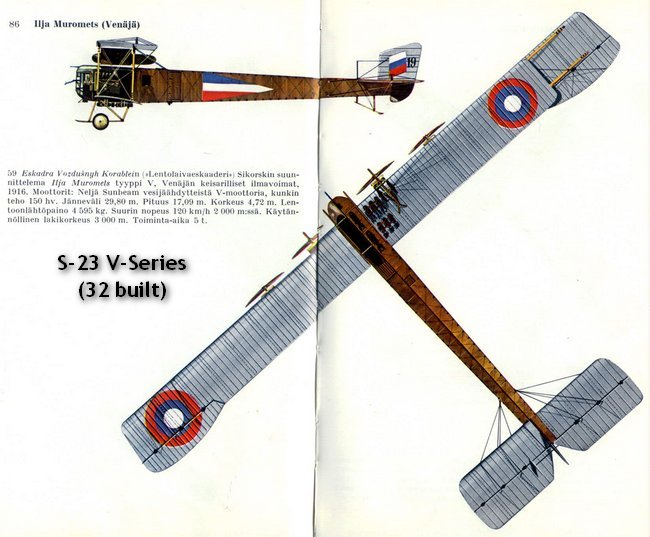 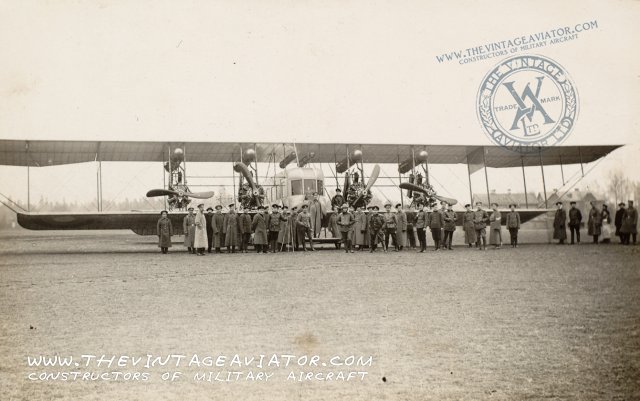 By the end of 1916, the design has become obsolete. The ensuing modifications, such as additional armor, made the aircraft too heavy and not worthy of upgrading. Only four bombers remained at the frontline, the others were relegated to trainer duties. However, in 1917 there were attempts to develop a new navalized version, some kind of flying minelayer / ASW plane. 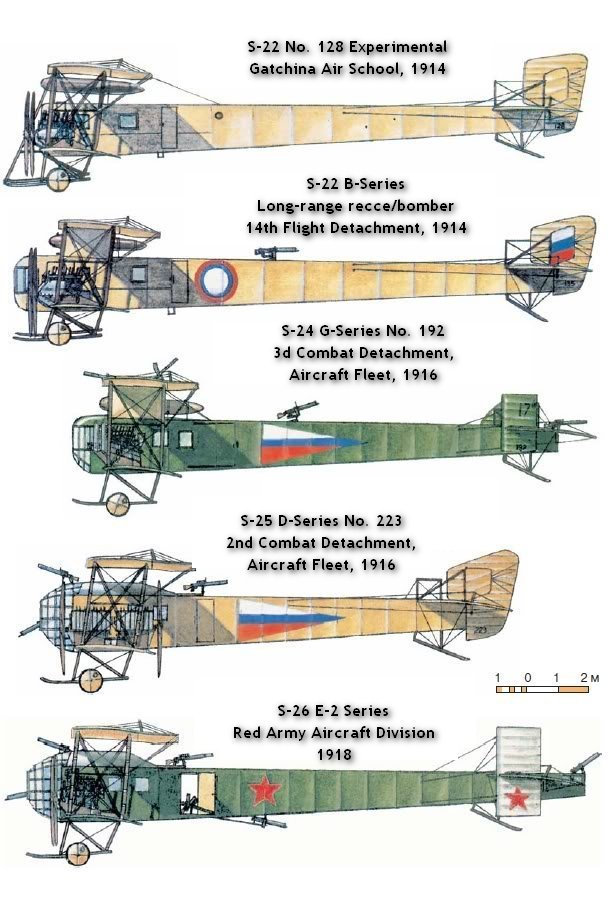 In 1918-1921 the old planes took part in the Civil War, mostly on the Red side, and also in the Russo-Polish war. Mikhail Vodopyanov, a famed Arctic pilot, recalls (in his book "Friends in the Sky") a conversation with an old aviator who fought on Muromets. He was told that the bomber was successfully used a ground attacker, dropping lances (sic!) on enemy cavalry. The number of hits was minimal (if any), but the sound of falling lances was awful enough to make the enemy retreat. Probably it's a legend but a beautiful one. The last flight of an Ilya Muromets bomber took place in 1922 at the Air Shooting and Bomb-dropping School in Serpukhov. Before that, two planes served as passenger & mail transport at the new Moscow - Kharkiv airline. 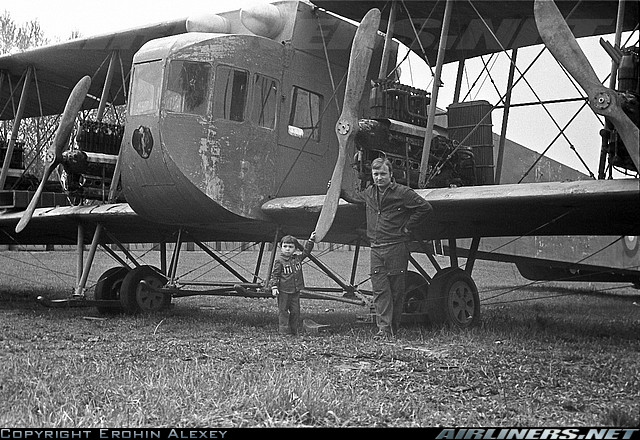 One Muromets replica exists in the Monino Air Museum near Moscow. 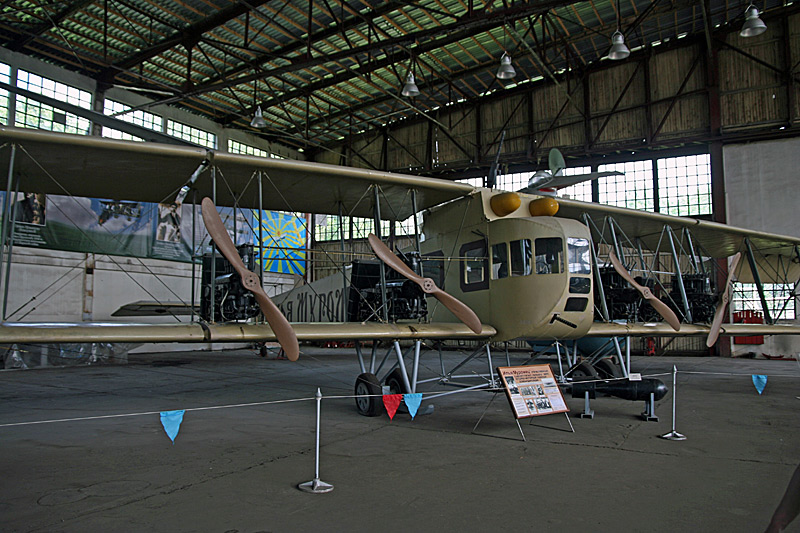