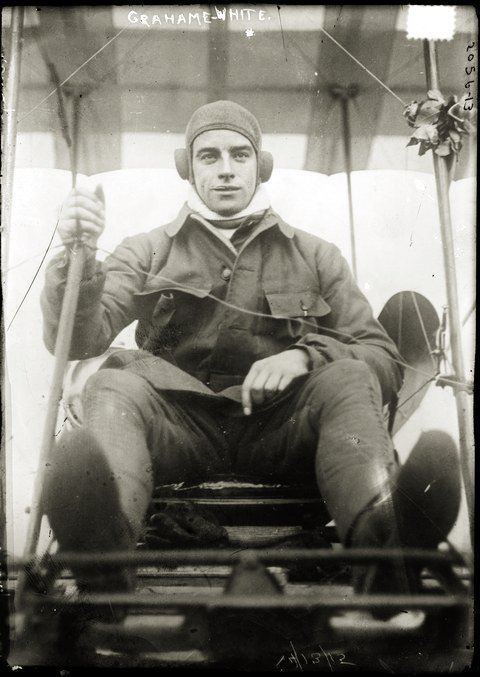 "Owned one of the first petrol-driven cars in England; toured South Africa; established motor engineering business in Albemarle Street; became interested in aeronautics 1909, the first Englishman granted a certificate of proficiency as an aviator..." (Who’s Who 1938. London: A & C Black, 1938)

Claude Grahame-White (1879-1959) was an aviation pioneer and the most famous aviator in Britain before the First World War. Among his many achievements: the first Briton to hold a pilot's license (albeit a French one, not British); the first night flight (during his failed attempt to win the London-Manchester prize); the founding of Hendon aerodrome; and the first official airmail delivery (London to Windsor). 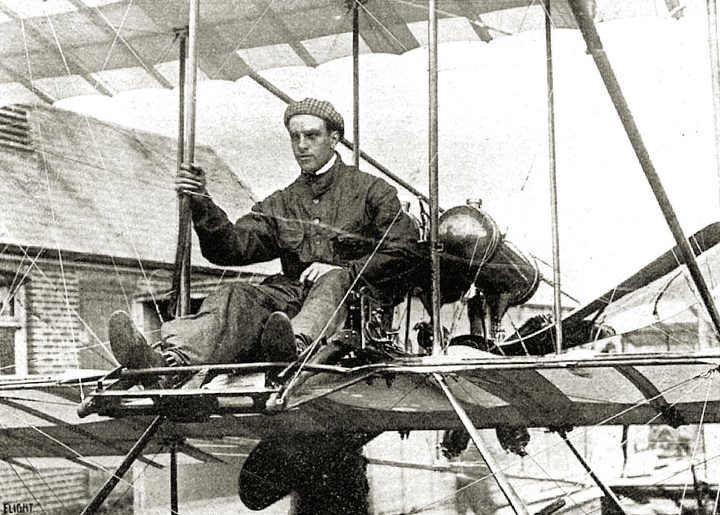 Grahame-White was also a propagandist. He was always looking for ways to highlight Britain's vulnerability from the air. From 1911 he gave demonstrations to the Parliamentary Aerial Defence Committee, dropping flour bombs on the painted outline of a battleship, for example. In the summer of 1912 he flew around the country in his 'Wake up England!' campaign. He also wrote widely on the subject, including The Aeroplane in War (1912), with the Daily Mail's air correspondent Harry Harper. (Source: airminded.org) 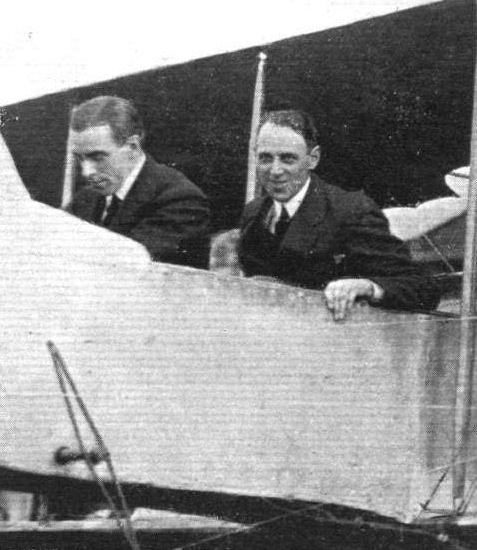 "On Sept. 5/6, 1914, Claude Graham-White & Richard Gates, his former General manager (we can see them together in a pre-war photo above - LK), both being commissioned in the Royal Naval Air Service, took off from Claude's airfield at Hendon. They were searching for a reported Zeppelin, after one hour landed without success. This was the first ever night patrol over London! 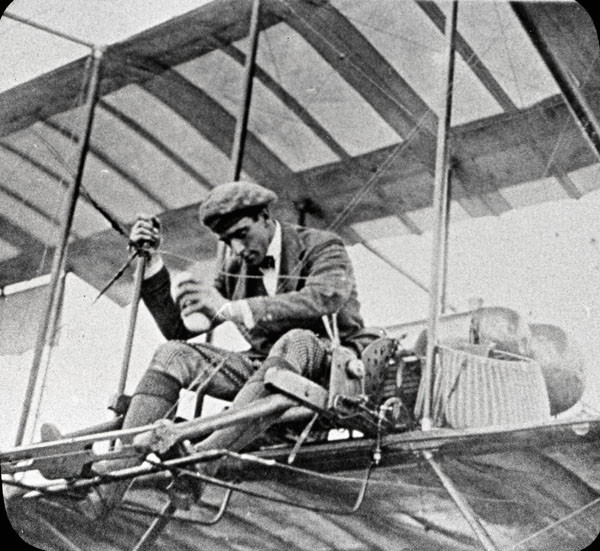 Back to his illustrious pre-war career. Claude Graham-White is often referred to as "the self-taught aviator who never took a single lesson". But I advise to stick to another version, less romantic and more credible, told by Henry Serrano Villard in his Blue Ribbon of the Air (1987): "<...>he had ordered a duplicate of Blériot's ill-fated Model XII; and to become acquainted with its construction he enrolled as a worker in the Blériot establishment at Neuilly-sur-Seine. He could hardly restrain his impatience. On the morning he was to take delivery at Issy-les-Moulineaux, instructions had not yet arrived. Impulsively he got into the machine and began practicing short hops. He then shipped the plane to Pau, where Leblanc was his instructor; and on 4 January 1910 he received the first French license No. 30 to be awarded to a Briton. (Under date of 26 April he would be granted British license No. 6 for having qualified as a pilot.) " The story continues in an article by Gavin Mortimer, titled Glamour Boy: "Soon Grahame-White was one of the best-known faces in Europe. Aviation meets were all the rage, and every promoter in town wanted his event to be graced with the dashing Grahame-White. Here, finally, was a charismatic performer, different from the grim-faced fliers who were more scientists that showmen. King Edward VII requested a private demonstration of the flying machine, but then died before Grahame-White could oblige. Instead the airman toured the country’s meets, collecting more than $75,000 (equivalent to approximately $1,200,000 today) in prize and appearance money. 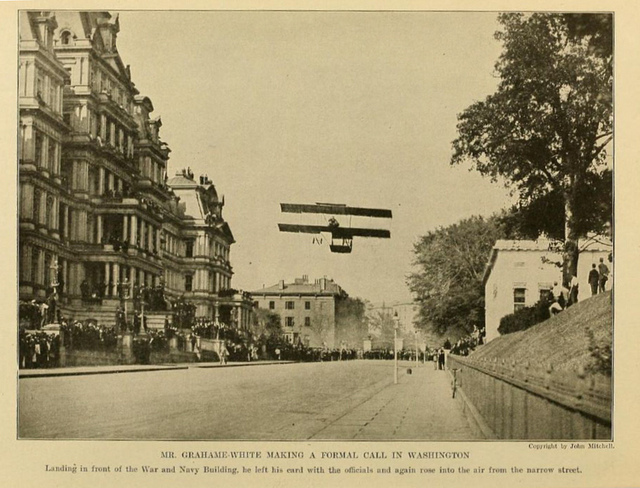 Grahame-White’s exploits didn’t go unnoticed in the States. Aviation meets were picking up in popularity, and when J.V. Martin of the Harvard Aeronautical Society came to Europe in the summer of 1910 seeking aviators to compete in the Boston-Harvard Meet, the name at the top of his wish list was Claude Grahame-White. He got his man with the promise of a $50,000 retainer and all expenses paid. 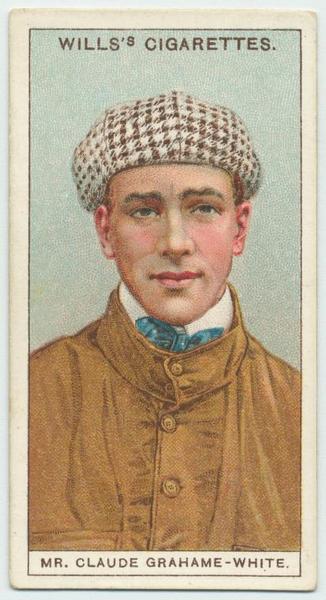 Grahame-White arrived in Boston on September 1 to a quayside lined with reporters and fans. One female journalist, Phoebe Dwight, warned Boston’s menfolk to be on their guard if they took their sweethearts to the airshow: “For before you know it these hearts may be fluttering along at the tail of an airplane wherein sits a daring and spectacular young man who has won the title of the matinee idol of the aviation field–Claude Grahame-White.” Dwight’s prediction was on target: By the end of the Boston-Harvard Meet women were falling over themselves to take a short ride with the famous airman. The Englishman, whose love of money was as ardent as his love of the fairer sex, charged $500 for a five-minute flight.

But Grahame-White wasn’t in America just to snatch the money and thrill the girls. He was also a competitor, intent on winning races against other fliers. In Boston he claimed the blue ribbon event, the 33-mile race from the airfield to Boston Light (in Boston Harbor), for which he won $10,000.

That feat brought him to the attention of President Taft, who attended the meet one day but jocularly declined to put his own 250-pound frame into a flying machine. The Mayor of Boston, John Fitzgerald (grandfather of JFK), did accept an invitation to fly with Grahame-White, however, and later presented him with a silver loving cup on which was inscribed: “From Boston Friends, in admiration of your skill and sportsmanship as an aviator.”

From Boston, Grahame-White went on to Belmont Park in New York to compete for Britain in the International Aviation Cup, which the American Glenn Curtiss had won the previous year in France. With Curtiss absent this time around, American hopes rested with young Walter Brookins in a Wright biplane. Another American, the fearless John Moisant, was also expected to do well, but neither they nor France’s Alfred Leblanc could prevent a Grahame-White triumph in his Blériot.

<...>on December 18, Grahame-White was badly injured chasing a $20,000 prize for the longest nonstop flight from England to the European mainland. It was while he lay in a hospital bed that he weighed his odds of surviving such a dangerous profession. Hardly a month passed without another aviator falling from the sky, and it seemed just a matter of time before his own luck ran out. So he quit competitive flying and plowed his money into creating the Grahame-White Aviation Company and London’s first aerodrome at Hendon. " (Source: Air & Space Magazine, September 08, 2010) 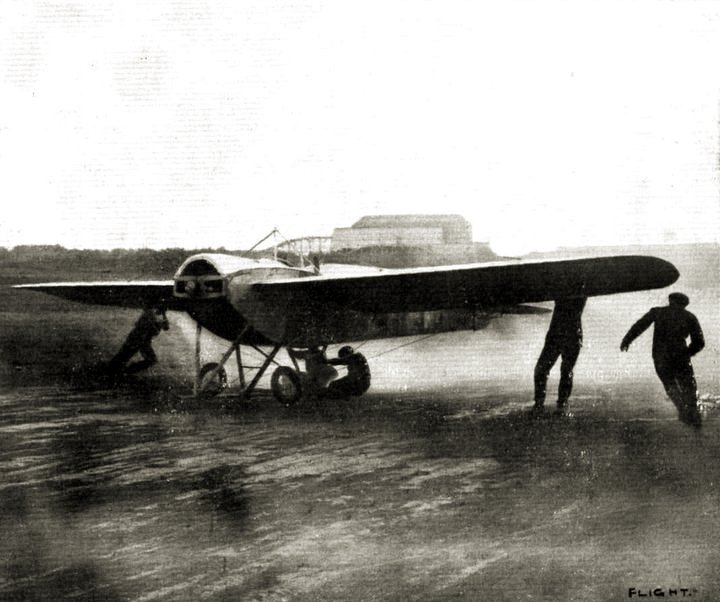 The Grahame-White Aviation Company began assembling Burgess Baby aircraft in 1910. In 1911 the company produced the New Baby and was also soon building Morane-Saulnier monoplanes under licence. When John D North joined the company in 1913 he began designing aircraft for the company, many of which were used by the Grahame-White flying school and pilots at the many aviation meetings. (some pictures of the Grahame-White aircraft are uploaded to my Flickr photostream). 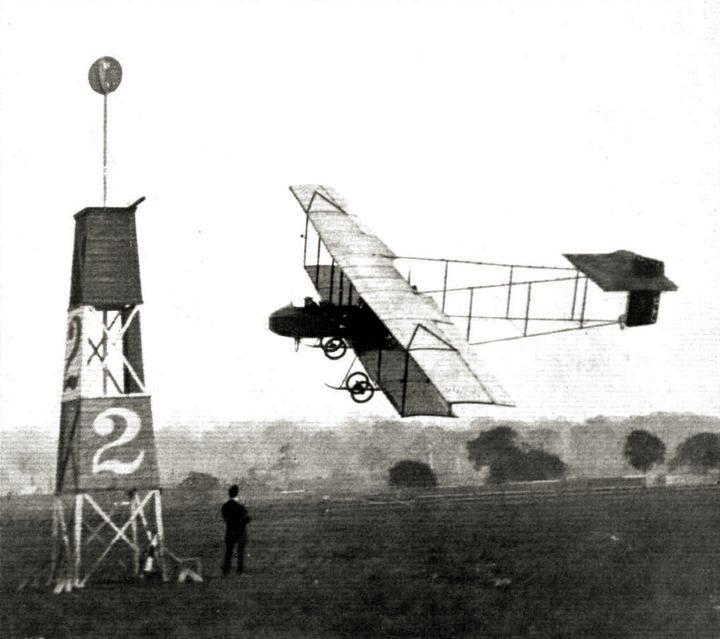 The factory grew rapidly during World War One. Orders were received from the Admiralty and the War Office for aircraft. Some of the houses in the area were built to accommodate the workforce for the factories; Aeroville was built by the Grahame-White company to house some of its employees.

An Aircraft Acceptance Park was established to take delivery of aircraft from the many factories in the area, including the Grahame-White works, Handley Page and Airco. In addition many pilots were trained at Hendon for both the Royal Naval Air Service and Royal Flying Corps. Three pilots who trained at Hendon, Mannock, Ball and Warneford, were later awarded the Victoria Cross for their bravery in the air. (Source: RAF Museum) 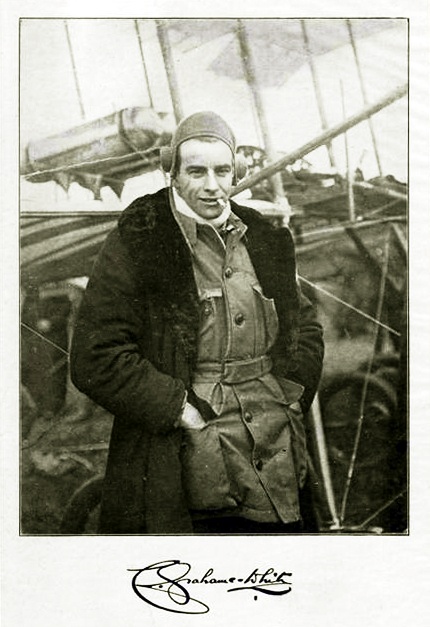 "We do know that White was out of favour by the end of the war and was forced to go to France looking for contracts. Eventually he became so disillusioned by Britain that he sold Hendon to the Air Ministry and emigrated to California where he was a realtor. In 1959 he died in Nice on his 80th birthday. Hendon is now the main site of the RAF Museum so perhaps it is not surprising that they were the only people able to provide us with some information on his aircraft. " (Source: Air Racing History)