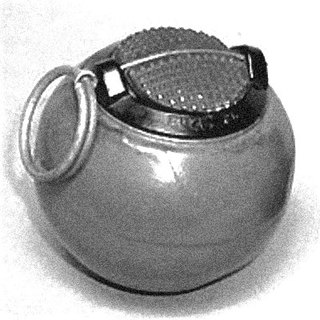 In western New York state, the Eastman Kodak Company was once corporate king. The one time film giant has shrunk in the digital age. It was the heart and soul of the working class city of Rochester, NY. However, did you know the company famous for Kodachrome film was also the World War II contractor for a secret handgrenade of the OSS?

As part of a the vast Kodak holdings in Rochester, right next to working class neighborhoods, a plant on Lincoln Avenue produced the T-13 "Beano", the United States baseball-sized impact detonating handgrenade.

The Office of Strategic Services, forerunner to the CIA, began looking for a grenade that relied on an impact fuse rather than a standard time delay fuse. The American bid for baseball size impact grenade was similar to the Italian Red Devil grenades (featured here.)

And so, Kodak engineers started the process of developing an impact fuse grenade system, with predictably flawed results.

The idea was ambitious and designed to bridge the gap between delayed grenades and proximity fused ordnance. However, the idea of a grenade detonating on impact meant that even with two arming mechanisms, accidents were bound to happen.

The grenade was roughly the size of a baseball and had a knurled cap that ran flush to the grenade body. The checked cap, resembling a manhole cover, was held in place with a traditional grenade pin that straddled the assembly. When the user held the grenade, two fingers were placed over the checked cap, the pin pulled and the grenade thrown.

Once in the air, the cap begin to pull away from the grenade body. The cap, acting as a sort of air brake, facilitated the unspooling of a length of cord. Extended at full length, the cord secondarily armed the grenade.

Now, upon hitting any object, from any angle, the T-13 Beano would detonate.

The War Department ordered over 800,000 for production and started vigorous testing. And that is when problems began to occur, including testing accidents that led to the death of several testers. Even with problems stateside, the Beano grenade was sent to Europe, roughly 10,000 units, for field testing. And there, grenades continued to go off erratically, killing some and injuring many more American troops handling the Beanos.

Before the T-13 was deployed, officers deemed the grenade more a detriment than benefit, ordering all destroyed and lost to history.

"hey, check out this gernade that i found"

"...officers deemed the grenade more a detriment than benefit, ordering all destroyed and lost to history."

But seriously, those things must have been fairly poorly-designed to fail that epicly.

Comment by Larry on January 12, 2011 at 8:30pm
I agree. Very interesting. You would think they would test the things before the government had to buy them.