The SG-113 Forstersonde was a down-ward facing cluster of recoiless weapons that fired in unison and was designed to kill tanks as Luftwaffe fighters flew overhead.

Six single-shot 77mm tubes were loaded in special vertically mounted pods on an aircraft, like the FW-190, near the root of each wing. These pods were angled slightly to the rear and were equipped with 45mm armor piercing round. With six downward facing pods in each wing, a standard weapon system would generate some seriously destabilizing recoil. So, the Germans made these pods recoilless, with the sabotted round firing from the bottom of the barrel, with a counter weight at the rear of the round propelled upwards, cancelling the recoil. 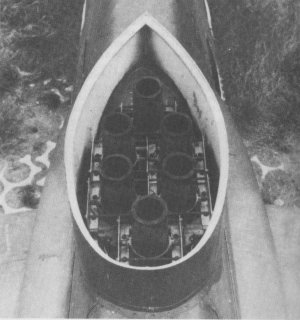 To fire the pods, an electrostatic sensor system was developed and calibrated to the detect the electrostatic field around a tank. However, German engineers found that trees, buildings and other obstructions on the ground would trigger a volley of rounds. A success rate of just 50% was achieved by this system, as a result it never made it to operation service.

Comment by Alex Bolado on August 18, 2011 at 7:03pm
50%? Sounds fairly useless, but it could have been improved by a second pilot/gunner who would aim and fire the device.