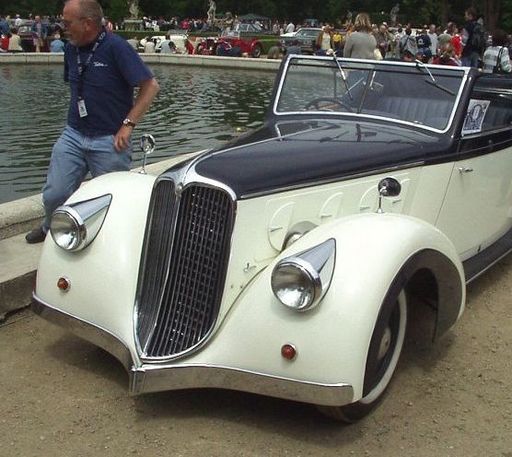 The Sodomka company was established by Josef Sodomka in 1895 in Vysoke Myto in what's now called the Czech Republic*. Within a surface area of 92 square meters and with only five workers he began production of all kinds of coaches, both sleighs and horse drawn carriages. They became the largest and best known coachbuilding company in the Czechoslovak Republic. Since 1925 Sodomka built car bodies for brands like Laurin & Klement, Skoda, Aero, Praga, Jawa, Tatra, Duesenberg, Mercedes and various others. The company was then under the management of Josef Sodomka Jr. The first bodies were wooden frames covered with imitation leather. They designed and manufactured one-offs on commission by special clients as well as small series for car manufacturers. The elegant bodies produced by J. Sodomka won awards at important competitions. In 1932 two bodies won 1st prize for elegance in Brno. These prizes provoked the interest not only of many important customers, but also of domestic and foreign car producers. The production area at Vysoke Myto was expanded along with the number of workers enabling the company to produce small series e.g. on Walter Junior chassis and 85 bodies on Tatra 52 chassis. The company was now known as "Carrosserie Sodomka". From 1936 there was close cooperation with the Prague Aero car works.

The growing prestige of the company also saw orders pouring in from abroad, and this period saw the bodies being fitted to chassis of various French, Italian, German, British and American cars.

WWII first restricted and finally brought to a halt production of bodies for private cars, which were more and more being replaced by buses, bus trailers, ambulances and special purpose bodies. There also was a ban on the use of so-called strategic materials during production. In 1944 new designs for private cars were drawn up at the plant in Vysoke Myto.

After the war they wanted to continue with the design and manufacturing for manufacturers like Tatra and therefore they introduced on their own initiative a modernized Tatra 57B, a Skoda Superb Convertible, a Skoda 1101 en the Aero Minor II. Unfortunately, the tidings for the coachbuilders had gone bad and the Skoda Superb was taken out of production as well as the T57B. The Skoda 1101 and the Aero Minor II were in the lower price range and therefore not suitable for Special Coachbuilding. Josef Sodomka Jr. 'donated' the company to the State and as a matter of 'thanks' he was allowed to stay with his company as the director, but in 1950 he was removed from his position by the Communist Party. After nationalisation of the "J.Sodomka, factory for bodies and vehicles in Vysoke Myto" in 1948 there was a drop in the production of car bodies. The Karosa national enterprise came into being, the main programme of which was the manufacture of buses and commercial vehicles. Despite this, during the fifties the factory turned out several top-class bodies. In 1953 a luxury body was built at Karosa on a Mercedes 770 base for Defence Minister General Cepicka and in 1956 the prototype of the Skoda 1500 body was produced, a sports laminated body on a Skoda 440 chassis, and the prototype of the Skoda 976 private car. Carrosserie Sodomka ceased to exist in 1958, but the Karosa company still builds commercial vehicles and buses.

Back on topic, that is one beautiful car.

It isn´t true, Sodomka doesn´t means anything but "a little Sodoma".