The Bugatti Royale, also known as the Bugatti Type 41 is a luxury model car that has a wheelbase of 169.3 inches or 4.3 meters, and an overall length of 21 feet or 6.4 meters*. The total weight of the vehicle averages 7000 pounds or 3175 kg, and makes use of a 12.7 liter straight 8 engine. When compared to newer vehicles, the Bugatti is about 10% longer than a Ford Super Duty F-450 truck and weighs about the same. Ettore Bugatti had plans to build only 25 of the Bugatti Royale, and wished to sell them to royals, but even those of such ample means were not into buying these overpriced cars during the Depression. Out of the 6 he actually made, Bugatti only sold 3. Even with the modern vehicles being produced, the Bugatti Royale is still considered the longest and one of the rarest cars in the modern world.

Ettore Bugatti created the Type 41 or Royale to appear much like a Rolls Royce. His prototype used the 12.7 liter engine, which measured about four and a half foot in length and three and a half feet in height. It is still considered one of the largest engines for an auto that was ever made, making between 275 and 300 horsepower. Photo by Shahed Hussain, via velocity

The cylinders were bored to between 125 and 130 mm, and each was displaced more than the engine of a new Type 40 touring vehicle. There were a total of 3 valves for each cylinder that were driven by one overhead camshaft and 9 bearings were used but only one carburetor. Every Bugatti Royale was made individually but was cast in the Roue Royale mold, where wheels measured 24 inches, and the cap for the radiator was an elephant that was created by Rembrandt Bugatti, the creator’s brother. The Bugatti Royale that had a basic chassis cost about $30,000 and was released at the beginning of the Great Depression in the early 1930’s. Only 6 were made between 1929 and 1933, and only half of those were sold. None were ever sold to royalty as originally intended, and King Zog of Albania was refused a vehicle by Bugatti due to his ‘table manners’. All of the original 6 vehicles made are still in existence, even though the prototype was demolished in an accident in 1931. Each of the 6 have a different body style, and a few have had new bodies placed on them many times.

The Bugatti Type 41.110 is called the Coupe Napoleon, and was kept by Ettore Bugatti as a personal car. To avoid being commandeered by the Nazis during World War II from the Bugatti home, it was bricked up. It was then sold to the Schlumpf brothers in the early 1960’s by L’Ebe Bugatti and now sits in the Musee National de l’Automobile de Mulhouse along with the 41.131 which was bought from John Shakespeare.

The Bugatti 41.111 known as the Coupe de Ville Binder was sold in 1932 to Armand Esders, a French clothing maker. Bugatti’s oldest boy, Jean made the car a two seater with an open body and full wings with a dickey seat and no headlights. When he finished construction on this model, it was then known as the Royale Esders Roadster. This models was bought by Patemotre, a French politician and was recreated in the Coupe de Ville style by Henri Binder. Although purchased by the King of Romania in World War II, it was never delivered and was hidden in the Paris sewer system to keep it from being taken by the Nazis. This vehicle was in the Harrah Collection for many years after WWII, but was sold in 1986 to a collector in California named General William Lyon. He offered the car in 1996 at auction and refused an $11 million dollar offer, as the reserve was $15 million. In 1999 Volkswagen AG bought this car for $20 million and use it as brand promotion since they are the new owner of the Bugatti brand name.

The Bugatti 41.121 known as the Cabriolet Weinberger was originally sold in 1932 to Dr. Josef Fuchs, who wanted an open cabriolet. He had it painted black and yellow and had it delivered. Dr. Fuchs moved to Italy and then Japan due to uprisings from war in Germany and then moved permanently to New York in 1937. The CEO of GM found the car in a junk yard in 1946 and bought it for a whopping $400. He then modified it so it was road ready and created an intake manifold with 4 carburetors and an oyster white paint with green trim. In 1957, he donated it to the Henry Ford Museum in Michigan where it still sits.

The Bugatti 41.131 Limousine Park-Ward was sold to Captain Cuthbert Foster, and had a body made for the vehicle after purchasing. The car was then bought by Jack Burton who was a Bugatti dealer in 1946, and he replaced the tires and removed the fender skirting.

He then turned around and sold the car to John Shakespeare in 1956, who owned the largest collection of any Bugatti vehicles in the world. In 1963, Shakespeare sold off his collection to Fritz Schlumpf and it became a collection again.

The Bugatti 41.141 Kellner car was never sold and was kept as a personal vehicle by Bugatti. He bricked it up during WWII along with 2 others to keep the Nazis from taking it. He sold it in 1950 to Le Mans racer Briggs Cunningham and then the car was sold by Christie’s auction house for $9.7 million. In 1989 in Las Vegas, a man bid the car up to $11.5 million and this was declined due to the reserve not being met. Ownership of this car is not known at this time.

The Bugatti 41.150 Berline de Voyage was also bricked during WWII, and was sold to Briggs Cunningham and had the same fate as the above vehicle. 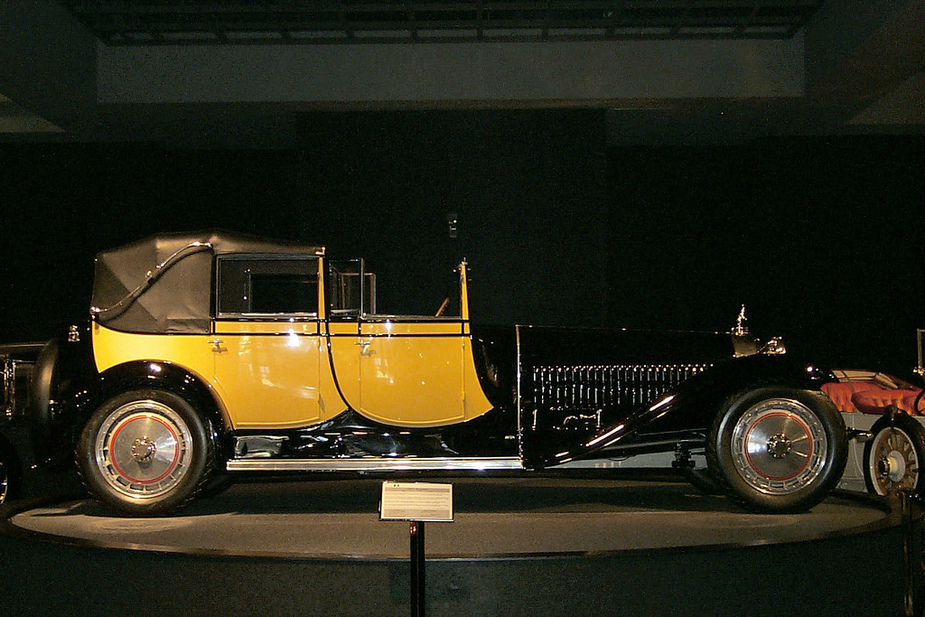 Photo by El Caganer via autoviva

It is now in the hands of the Blackhawk Collection in California where it is displayed.

The Bucciali is a beautiful piece of craftsmanship.

Some of his patients surely would. But remember, sometimes a cigar is only a cigar ;-)

It's a Bigatti!  Methinks Freud would love this car...