Mercedes-Benz domination in Grand Prix ended with the Auto Union Typ C. It took a few years to get it right, but Ferdinand Porsche's daring design with a mid-mounted V16 finally won. It claimed many victories from 1936 to 1938 until the three-liter formula was laid out for 1939. Horch, Audi, DKW and Wanderer created Auto Union with the help of Ferdinand Porsche and Adolf Rosenberger. Along with building passenger cars, a goal of the new company was to enter Grand Prix. They did so in 1934 with a daring mid-engined race car called the Typ A. This evolved into the slightly larger Typ B the following year and the Typ C was fitted with a much larger engine for 1936. The Typ C was a third evolution of Auto Union's racecar. It primarily competed with Mercedes-Benz but also raced against Alfa Romeo's 12C-36, the Maserati V8RI and Bugatti 59/50. Type-Cs won six victories in 1936 and made Bernt Rosermeyer world champion. Ferdinand Porsche designed the Type-C and championed his mid-engine design first used on the 1923 Benz Tropfenwagen. Weight distribution was his primary motivation in this choice. The driver could sit lower with no drive shaft and the front-to-rear weight distribution was more even. Furthermore, the fuel tank was also located centrally for balance. Despite these efforts, 60% of the weight still remained on the rear wheels. What made the car unbalanced was its heavy engine and comparably small chassis and body. The design team engineered the largest possible engine within the 750 kg weight limit. This resulted in the largest capacity engine to compete during 1936 and 1937. 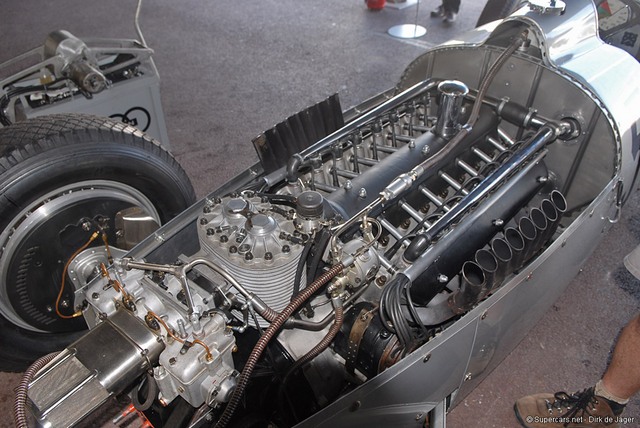 The chosen displacement was was six litres that was supercharged to achieve 550 bhp. A roots supercharger was attached to increase boost pressures up to 10 psi. The high power to weight ratio, uneven weight distribution and Porsche swing-axle suspension system made the Type C over steer. Drivers of the car had a hard time predicting slip velocity and the forward driving position made it worse. Only a couple drivers were able to take the Type-C to its full potential.