Sport in general and motorsport in particular was a popular method of displaying a country's abilities without taking up the arms*. With the rise of nationalistic governments in the 1930s, the desire to prove the country's worth on the track also increased. Especially in Germany and Italy the motorsport industry received considerable financial backing. Most of the attention was focused on the single seater Grand Prix class that was once dominated by the likes of Maserati, Alfa Romeo and Bugatti. Due to the spiralling costs most manufacturers focused on other types of racing, leaving Alfa Romeo to take on the German Auto Union and Mercedes-Benz teams. By 1938 even Alfa Romeo started to look at alternative classes, leaving the big three litre Grand Prix class to the Germans. Plans for a 'voiturette' Alfa Romeo were laid out by Alfa Romeo's semi-official racing department Scuderia Ferrari in 1937 and the new car was developed alongside three new Grand Prix cars (the 308, 312 and 316). By the time the first car was produced, Scuderia Ferrari had been bought by Alfa Romeo and renamed Alfa Corse. Disappointing results with the new Grand Prix cars saw the priority gradually shift towards the new Alfa Romeo 'voiturette' car in the first half of 1938. French for little car, the voiturettes were true to their name with a displacement limit of 1.5 litre, which was half that of the big Grand Prix cars. Before Alfa Romeo's arrival the class was dominated by the six cylinder engined ERAs and Maseratis, complemented by one of the old Delage straight eights, still competitive ten years after its debut. 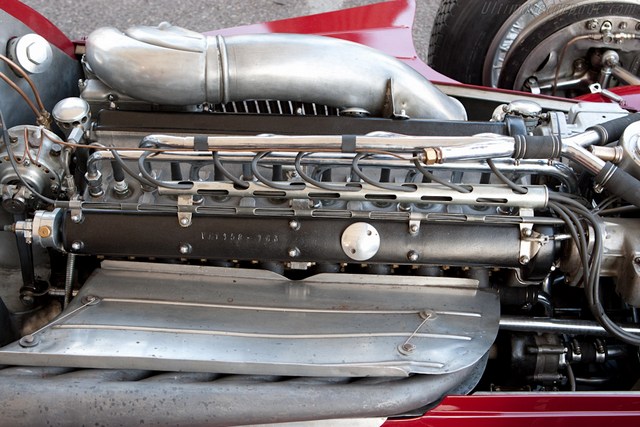 Possibly inspired by the legendary Delage, Colombo designed an all new straight eight engine. Forced induction was through a single Roots-Type Supercharger mounted alongside the engine. The driver seat was mounted relatively low because of the use of a double reduction gear for the propeller shaft, which connected the engine with a four speed transaxle type gearbox. Initially the engine was good for around 195 bhp, but continuous development and the addition of a two-stage Supercharger saw the power increased to a staggering 350 bhp at the end of its career. The potent drive-train was installed in sturdy tubular chassis suspended by trailing links at the front and swing axles at the rear both sprung by a transverse leaf spring. Lockheed hydraulic drum brakes provided for plenty of stopping power.

A simple combination of the engine's displacement and number of cylinders gave the new racer its '158' type number, but it was soon referred to by press and public alike as the 'Alfetta' or little Alfa. The first car was tested in May of 1938 at Monza and four cars were ready for the 158's competition debut at Leghorn a mere three months later. A glorious one-two finish was sign of the many good things to come from the Alfetta, although reliability issues hampered the small Alfas in most of the remaining races that season. All of Italy's single seater races had switched to the voiturette formula for 1939, including the prestigious Tripoli GP. In a surprise move Mercedes-Benz made a voiturette car specifically for the Tripoli race and beat the Alfettas.

Giuseppe Farina in the Alfetta 158 by Danúsio, on Flickr

After the shock defeat, Colombo carried through modifications to the engine and bodywork and the Alfettas engaged in a remarkable series of victories. Even though the German teams were not present for the 1940 Tripoli Grand Prix, the Alfa Romeos got their revenge by winning the race averaging 5 mph faster than the previous year's winning Mercedes. The time for peaceful competition was over in Europe and the racing cars were replaced by a lot heavier machinery for the next five years. Anticipating the destruction to come, Alfa Romeo carefully hid their racing cars and tools in various locations around Milan.

Remarkably all cars were spared and Alfa Romeo was back to their winning ways after the War, dominating the 1947 and 1948 seasons, before taking a year off to develop a new road car. Rule changes promoted the voiturette class to the Grand Prix / World Championship level and renamed to Formula 1 for the 1950 season. The rules allowed for 1.5 litre supercharged cars and 4.5 litre Naturally Aspirated cars. Ironically Alfa Romeo's premier competition in 1950 came from Enzo Ferrari, who had severed his ties with the Milanese company before the War and now built and entered cars under his own name. Twelve years after the Alfetta's debut, it had its most glorious season winning every one of 11 races the cars were entered and humiliating the competition in the process. Nino Farina became the first Formula 1 champion ahead of team mates Fangio and Fagioli. For 1951, Alfa Romeo introduced the 159 Alfetta, which had a 425 bhp version of the two-stage supercharged engine and a DeDion rear axle. The additional power came at the expense of very excessive fuel consumption forcing the Alfa drivers to pit more frequently that the Naturally Aspirated Ferraris and Talbot Lagos. Alfa Romeo started the season with three victories, but in the fourth race their unanswered series of 26 victories was ended by Froilan Gonzales in his Ferrari. Another two wins were scored by Ferraris and the championship would have to be decided in the season's finale at the Spanish Grand Prix. Helped by a poor tire choice by Ferrari, Fangio took a relatively easy victory and took Alfa Romeo's second championship in a row and his first of five. Further rule changes for the 1952 season finally left the Alfettas obsolete. The requested amount of financial support from the government to build a replacement was too high, so Alfa Romeo withdrew from motor racing. In its 15-year racing career the Alfa Romeo Alfetta scored 33 major victories, of which 26 were in an unbroken row. Emilio Villoresi took the model's first victory during the 1938 Coppa Ciano and Juan Manuel drove the 159 to victory for a final time at the obscure 1953 Merano Grand Prix in Italy. Although the Alfetta started life as a Voiturette, it has earned its place in history as one of the greatest Grand Prix racers ever built.

It is believed that six 158s were built in 1938, which were raced for two seasons. Incorporating Colombo's changes, a further six were constructed over the 1939/1940 winter with a twin-stage supercharger and a new body. The new cars could have incorporated parts from the survivors of the first batch of cars and it is unlikely that there were ever 12 complete 158s.

For the 1951 season four new 159s were constructed with a twin-supercharger engine and a DeDion axle. To add to the confusion, the surviving 158s were all renumbered 159 even though they retained the 1950 specification. Today at least two 158s and three 159s are known to exist. The later cars are are all owned by Alfa Romeo, while one 158 is on display in the Biscaretti museum and another in private hands.