Richard Lea and Graham Francis entered into partnership in August 1895 to make advanced and relatively expensive cycles of quality in Lower Ford Street, Coventry, which soon gained a high reputation*. Less successful was their first experiment with cars in 1903, which had a strange three-cylinder underfloor engine, and did not sell. They did much better with motorcycles, which were built from 1912 to 1924, by which time the first successful light cars with Meadows engines were in production. These enjoyed some success in competition, but higher power necessitated a stronger chassis and transmission, which came in 1927 and was used both for the popular 12/40 and the exciting Hyper, the first supercharged production car. This did well in racing, winning the 1928 TT, but the effects of the depression, exacerbated by an unsuccessful attempt to move upmarket with a twin ohc six-cylinder car, resulted in receivership in the early 30s. Lea-Francis was revived under new management in 1937 to produce a new car designed by ex-Riley man Hugh Rose in a factory in Much Park Street. The engine was similar in layout to the Riley, but with the two camshafts mounted high in the block and very short pushrods. Few of these cars were produced prewar, but after 1945 their successors with 14hp and (from 1949) 2½ litre power proved popular, both in the form of saloons and attractive sports cars. 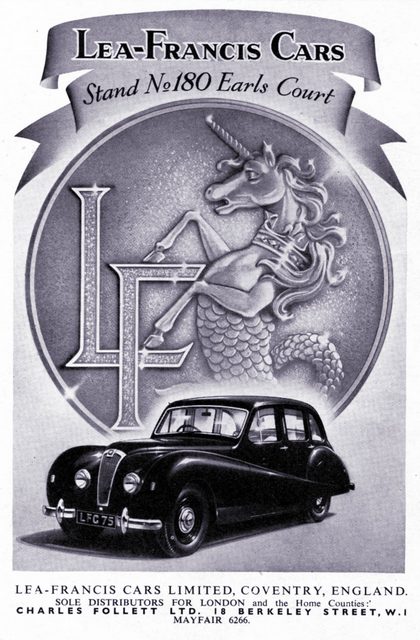 Highly tuned versions of the engine were fitted to a number of racing and sports cars, notably the first Connaughts. In the early 50s sales declined and the company concentrated on general engineering, making an ill-fated attempt at a comeback with the Ford Zephyr-engined Lynx in 1960 before the assets were finally sold in 1962. Recently, after many years when the name was kept alive through the valiant efforts of Barrie Price with an excellent spares and restoration service and the occasional car, the distinctive Lea-Francis badge again graced a fine new prototype sports car, brilliantly designed by Jim Randle for low-volume manufacture, but unfortunately it has not gone into production.