As a successful businessman and experienced amateur driver, Piero Dusio started Cisitalia, officially known as Consorzio Industriale Sportive Italia*. The company employed a wealth of talent to develop limited production sports cars that were based around upgraded Fiat components. Cisitalia's first product was the D46, a small single seater which used a space frame to support its Fiat 1090cc engine and Fiat 500 suspension. After producing a several customer D46s, and achieving a debut victory in the Brezzi Cup in Turin, Cisitalia focused on building small passenger car based on the D46, including it's Fiat components and space frame chassis. Called the 202, each cars was finished as a rolling chassis and bodied by various design houses. Pinin Farina was responsible for a definitive coupe which set the visual standard for all future sports car bodies having a low and flat hood. Since the 202 never made large scale production and all the cars were handmade, the small talented group at Cisitalia, including Carlos Abarth, Dante Giacosa and Giavonni Savonuzzi, made several variants of the 202. Of the more important versions, the SMM Nuvolari Spider was built and named after a class victory at the 1947 Mille Miglia. It is easily identified by its large rear fins, twin windscreens and usual Italian blood red paint scheme. Partly due to expensive construction of the mid-engine, four wheel drive formula one car designed by Ferry Porsche, Cisitalia went into receivership in 1949 and was sold in 1952. In total, around 200 cars were made which made a large impact on the later marques, including Abarth's later range of cars. With resources and talent from the defunct Cisitalia Automobili, Carlos Abarth started his own company called Abarth & C. in Turin and the 204 A roadster was his first car. He acquired the remnants of Cisitalia including the 204 which he had modified by Porsche to fit their torsion bar rear suspension. Visually the cars appeared like a scaled-down version of the Cisitalia grand prix cars. The engine was derived from a Fiat 1089cc unit fitted with twin Webers. The car was successfully raced in the 1949 season by the Cisitalia-Carlo Abarth Team in the 1200cc class. After wins by Pierro Taruffi at the Circuit of Reggio Emilia and the Aosta-Gran San Bernardo, it looked like Abarth was set to take the Grand Prix of Madrid. Unfortunately all the 204s failed, leaving victory to the Simca-Gordini. That year Taruffi still clinched the F2 title for sports cars. By 1950, Abarth removed all the Cisitalia logos from the 204 and prepared extensively for Tazio Nuvolari's drive in the 10th Giro de Sicilia. At 57 years old, this was Nuvolari's last stab at professional racing. He won the Palmero-Monte Pellegrino hillcimb which was his last victory in professional racing. Nuvolari retired from the team before the great Sicilian race. (Source: Richard Owen, Supercars) 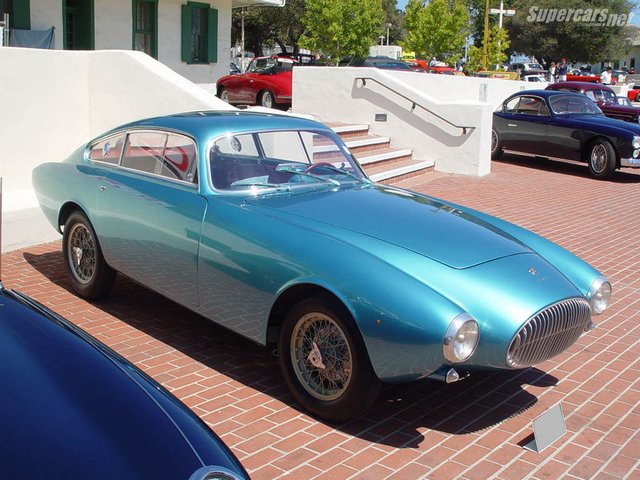 Wow...these designs were a decade ahead of everywhere else!

A big favorite of mine!