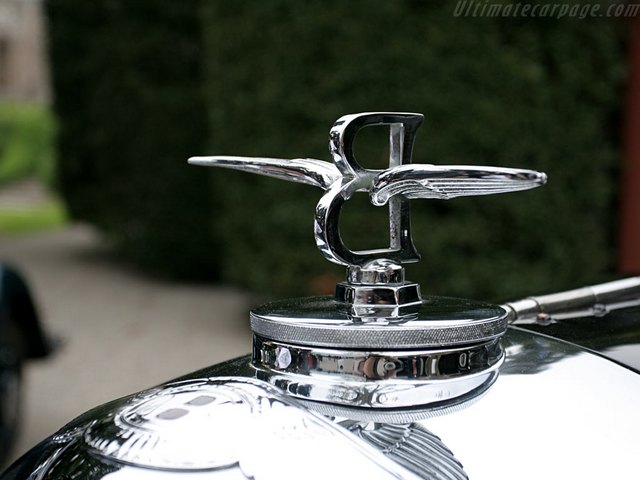 The 8-Liter Bentley was introduced at the 1930 London Motor Show*. It featured an 8-liter engine which was a development of Bentley's race-winning 6.5-liter unit. The main purpose of this model was to add competition in the luxury car segment and challenge the Rolls-Royce Phantom. The power-plant was an engineering marvel, fitted with an Elektron crankcase and sump. The engine was a single iron block and cylinder head with four-valves per cylinder. It had an twin-spark ignition, a bore of 110 mm and a stroke of 140 mm. The straight-six engine carried chassis with wheelbases of 144 inches or 156 inches. The 156-inch wheelbase was the largest car produced in the UK up to that point in history. It could carry the large and luxurious bodies to speeds of 100 mph. To keep the weight of the vehicle to a minimum, many of the bodies and mechanical components were formed from aluminum. An overall weight of about 3700 pounds was typical for the chassis alone. A completed vehicle often tipped the scale at over 2.5 tons. Four-wheel servo-assisted brakes helped keep the vehicle in the drivers control. There was a four-speed manual gearbox with a single-plate dry clutch and semi-elliptical springs on all four corners.

This example was the second car built, it features saloon bodywork by HJ Mulliner and was W O's "company car" which he used to tour Europe after he had sold the company to Rolls-Royce.

The launch of the Bentley 8-Liter coincided with the onset of the Great Depression. As a result, the small pool of wealthy individuals who could afford one of these machines, dwindled. Competition between marques became even more fierce, as prices dropped and more amenities and accessories were offered in an attempt to lure buyers. This model was financially devastating to Bentley. Bentley's principal backer at the time, Woolf Barnato, was enduring financial difficulty during this sad time in history. As a result, he severed his financial support with Bentley. Production of the 8-Liter Bentley reached 100 units before production ceased. Rolls-Royce took the opportunity to rescue the struggling company and brought it under its financial protection. This move by Rolls-Royce, also ensured that the marque would never again offer competition to its luxury brand. The Bentley line was modified and acted as the entry-level cars in the luxury department. Most of the Bentley 8-Liter cars were given limousine or four-door saloon coachwork. A few were outfitted with sporty coachwork. Most were in closed configuration with fewer than 25% outfitted with open bodies. The list of coachbuilders included Vanden Plas, Kellner, Thrupp and Maberly, Arthur Mulliner, Gurney Nutting, Park Ward, Freestone & Webb, Letourner et Marchand, Binder and Walter J. Murphy. Comment by Komissar Hass on May 11, 2013 at 3:26am
Beautiful automobile. I love the looks of black-and-brass Tourer on photo number 4.

Nice, but thought the Duesenberg was a fine automobile as well.