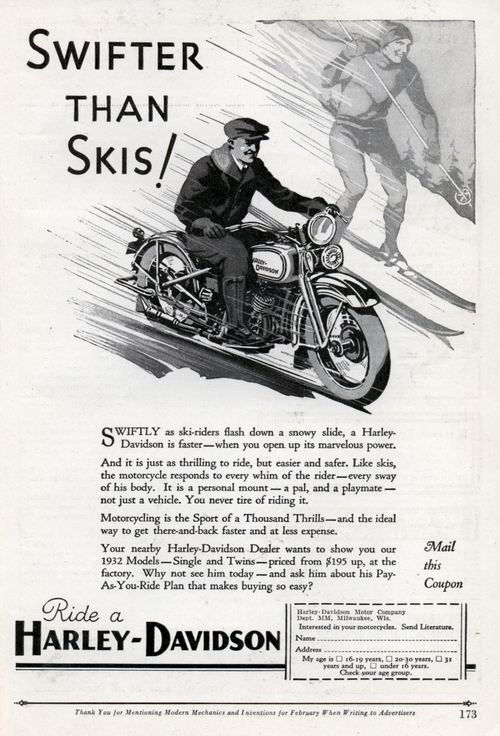 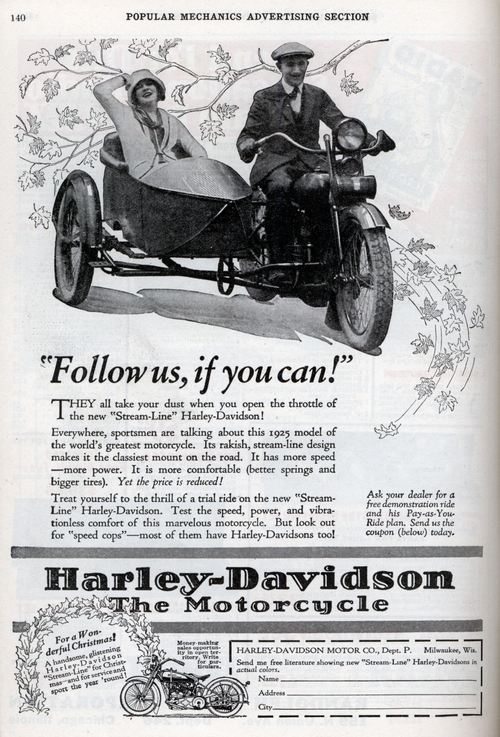 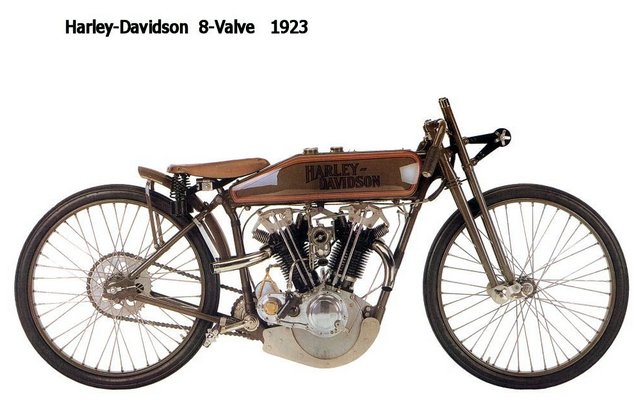 In the late summer of 1929, Harley-Davidson introduced its 45 cubic inch flathead V-Twin to compete with the Indian 101 Scout and the Excelsior Super X. 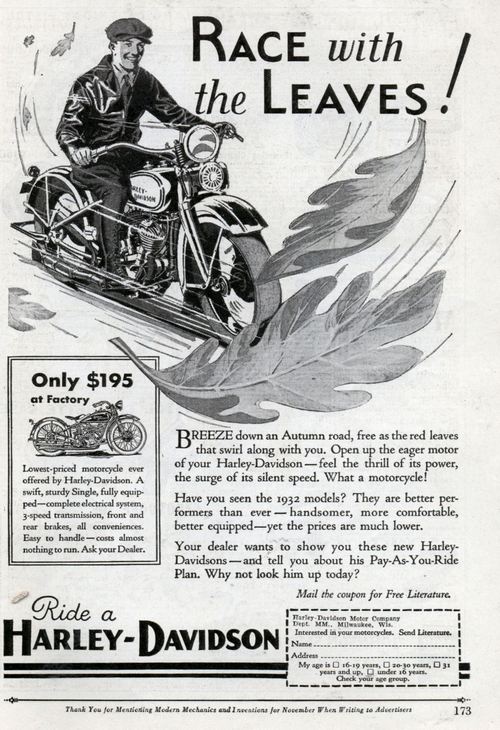 During the Great Depression, Harley-Davidson's sales plummeted from 21,000 in 1929 to 3,703 in 1933. Despite those dismal numbers, Harley-Davidson proudly unveiled its lineup for 1934, which included a Flathead with art deco styling. 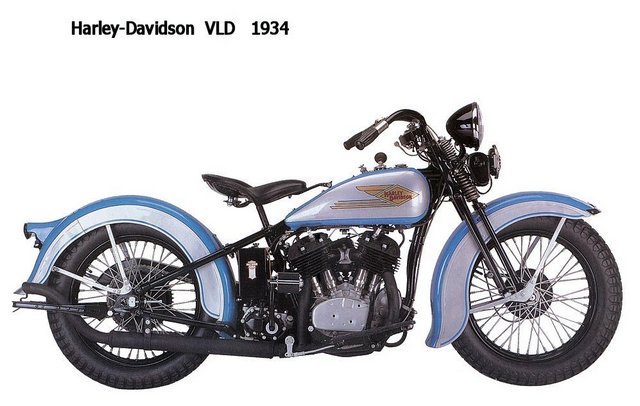 n 1936, the 61E and 61EL models with the "Knucklehead" OHV engines was introduced. Valvetrain problems in early Knucklehead engines required a redesign halfway through its first year of production and retrofitting of the new valvetrain on earlier engines. 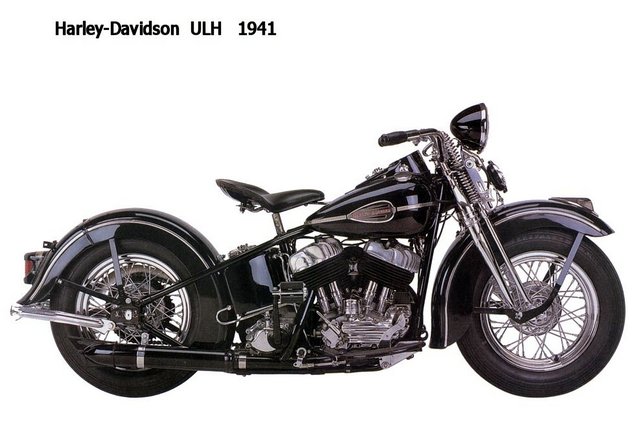 By 1937, all Harley-Davidson's flathead engines were equipped with dry-sump oil recirculation systems similar to the one introduced in the "Knucklehead" OHV engine. The revised 74 cubic inch V and VL models were renamed U and UL, the 80 cubic inch VH and VLH to be renamed UH and ULH, and the 45 cubic inch R to be renamed W. 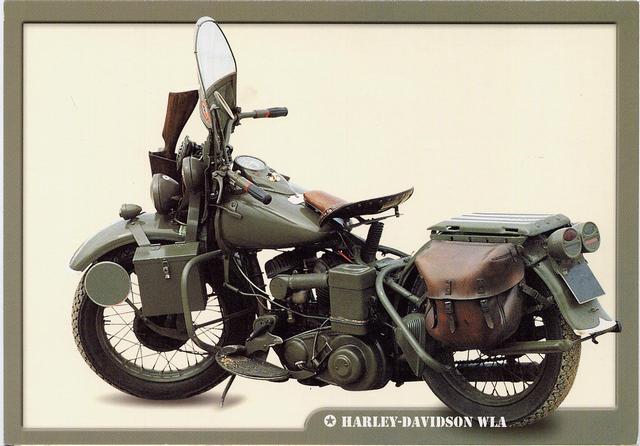 Harley-Davidson, on the eve of World War II, was already supplying the Army with a military-specific version of its 45" WL line, called the WLA. (The A in this case stood for "Army".) Upon the outbreak of war, the company, along with most other manufacturing enterprises, shifted to war work. Over 90,000 military motorcycles, mostly WLAs and WLCs (the Canadian version) would be produced, many to be provided to allies. 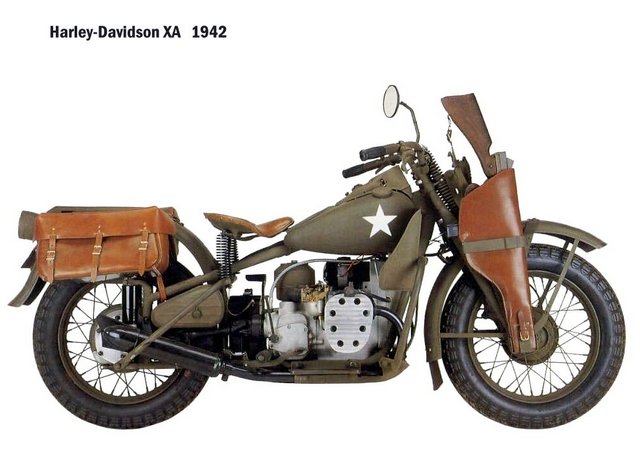 The U.S. Army also asked Harley-Davidson to produce a new motorcycle with many of the features of BMW's side-valve and shaft-driven R71. Harley largely copied the BMW engine and drive train and produced the shaft-driven 750 cc 1942 Harley-Davidson XA. This shared no dimensions, no parts and no design concepts (except side valves) with any prior Harley-Davidson engine. Due to the superior cooling of the flat-twin engine with the cylinders across the frame, Harley's XA cylinder heads ran 100 °F (56 °C) cooler than its V-twins. The XA never entered full production: the motorcycle by that time had been eclipsed by the Jeep as the Army's general purpose vehicle, and the WLA - already in production - was sufficient for its limited police, escort, and courier roles. Only 1,000 were made. 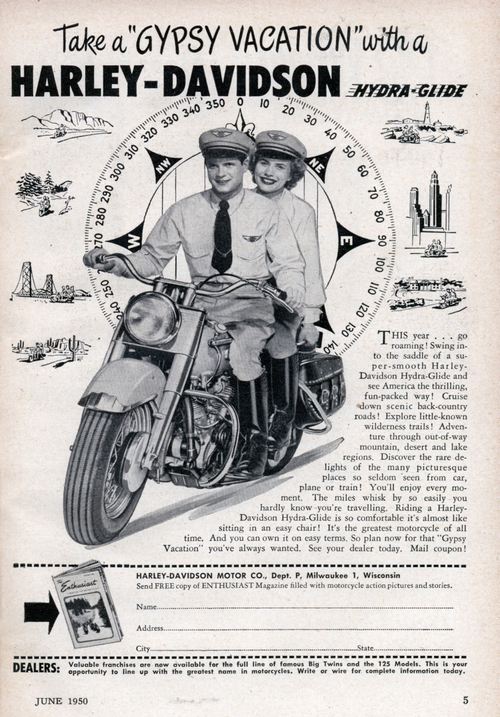 Hollywood also damaged Harley's image with many outlaw biker gang films produced from the 1950s through the 1970s, following the Hollister riot on July 4, 1947. "Harley-Davidson" for a long time was synonymous with the Hells Angels and other outlaw motorcyclists. Comment by Hayen Mill on February 19, 2010 at 2:46pm
ai mamacita. That one with the white ww2 star just outshines all the rest

Comment by Tome Wilson on February 19, 2010 at 11:26am
Great choice, Lord K. I used to live in York, PA which is the motherland of Harleys. Once a year, the whole city would explode (sometimes literally) with bikers. It was fun!