Volkswagen, the People's Car, needs no introduction. Let us see where it comes from. 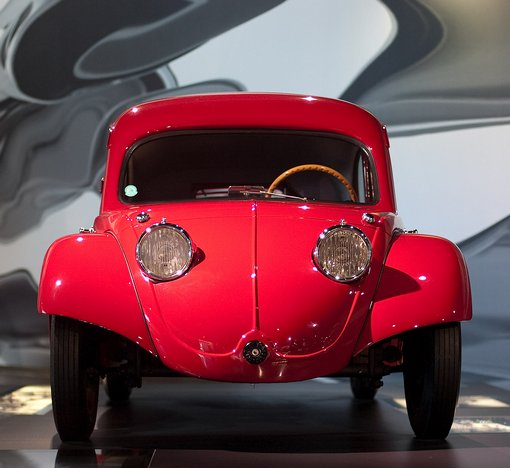 VW is the brainchild of Dr. Ferdinand Porsche. It is often dubbed "Hitler's little car". Well, the Fuhrer's part in creation of this vehicle cannot be denied, but in some sources it is exaggerated. For example, this sketch is attributed to Hitler: 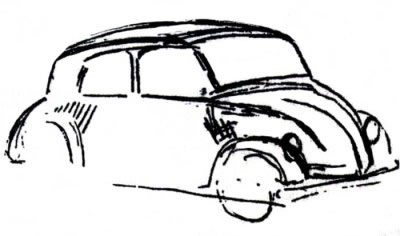 But nobody has given a substantial proof for the сlaim. The other sketch (in the centre of the composition below), signed A.H., seems more convincing: What we know for sure is that Porsche met Hitler in January 1934*. They discussed a people's car concept. Probably the Führer and his guest made some quick sketches. As a result of their conversation, Porsche was commisioned to design a small rear-engine, air-cooled car that would sell for less than 1000 Reichsmark. 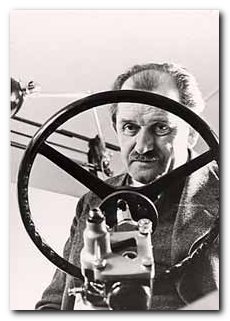 "And the rest is history"? Don't hurry, it's only a prologue. There were some rear-engine designs in Porsche's portfolio: he built a number of prototypes for Zundapp and NSU. His NSU Type 32 was quite close to the specifications outlined by the Führer, it already had a four-cylinder boxer engine at the rear, but the car was too expensive and complicated to be pressed into mass production.
Here are three versions of the Type 32 - V2 cabriolet, V1 aluminium-body sedan and V3 with steel body: 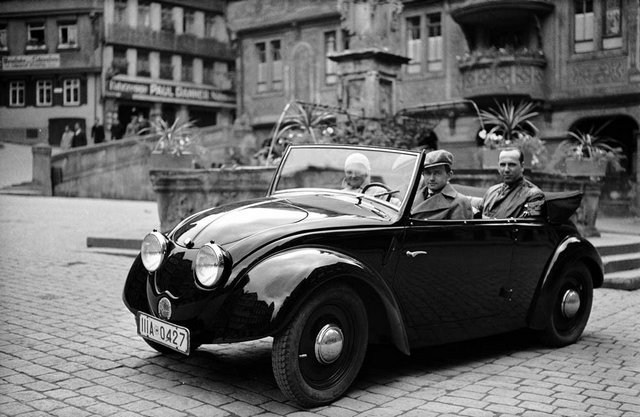 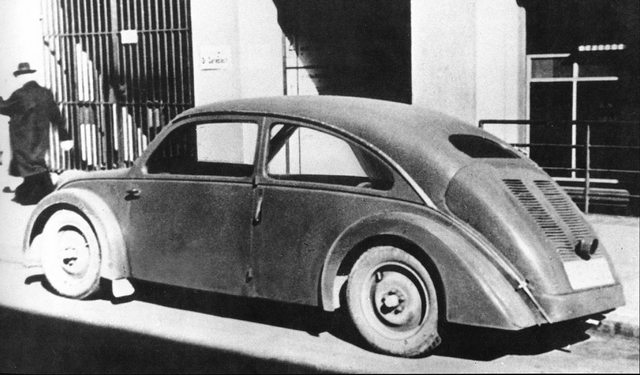 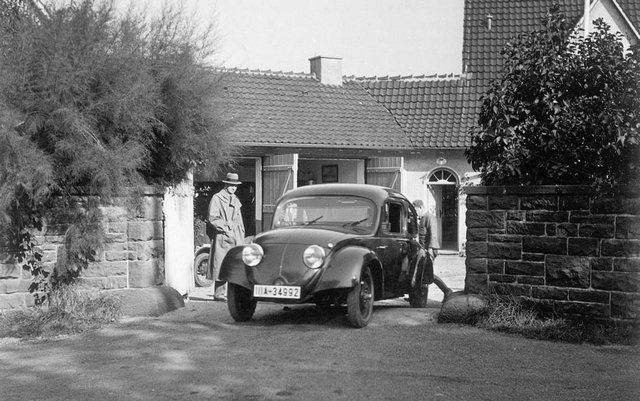 The latter became a starting point for further development. Here we see the first prototypes tested somewhere in Black Forest: 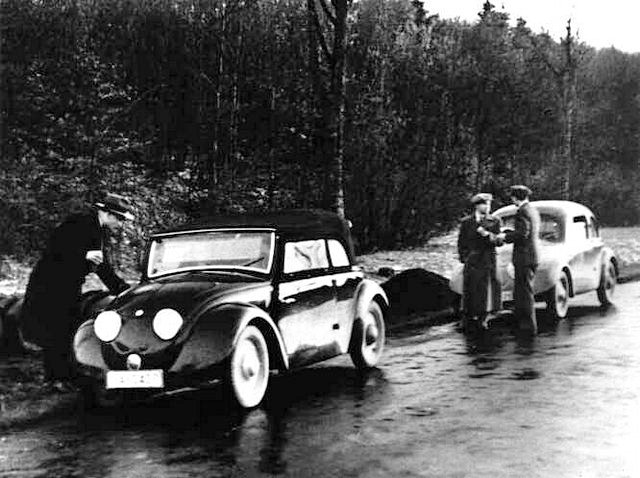 Next step was a pre-production series of 30 cars (29 two-door sedans and one converible), named the Volkswagen VW30 and tested by SS servicemen and Volunteer Nazi Automobile Corps staff. 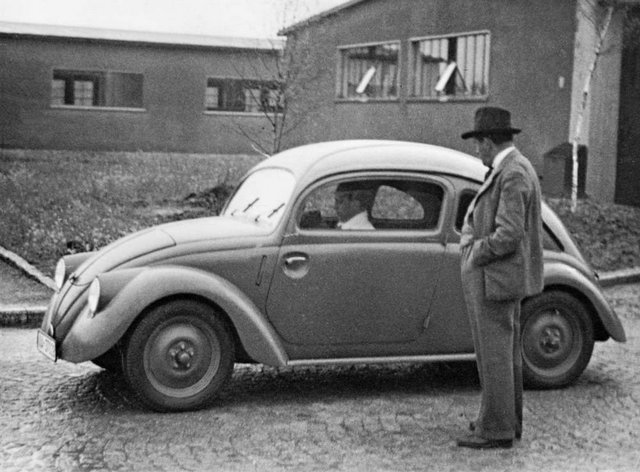 At least one of VW30s survived: 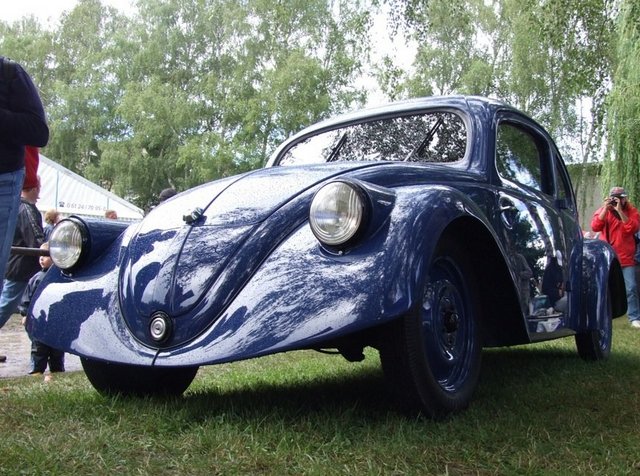 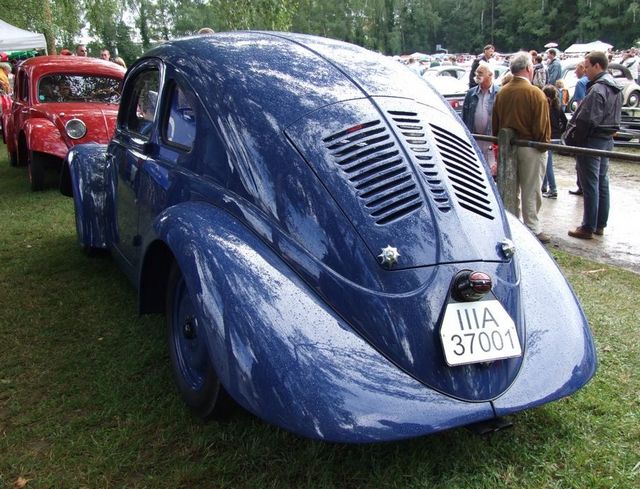 If Hitler appears larger than life in the Beetle story, the other influential person is usually ignored: Hans Ledvinka, former colleague of Porsche's, who worked for Czekhoslovak Tatra company and eagerly pursued the idea of rear-engined air-cooled vehicle. The idea finally took shape of the famous Tatra T77 (first pre-production car: 1933, production started: 1934). Of course, Tatra was large and quite expensive - but since 1937 it had a smaller companion, T97 (below left), looking strikingly similar to Volkswagen (VW30, below right):

No wonder that after the 1939 annexation of Bohemia & Moravia the T97 production was canceled - by the order from Berlin. Back to Germany: in 1937, a new pre-production batch of 44 cars was built. These VW38-series convertibles and sedans were very much alike the future Beetle: 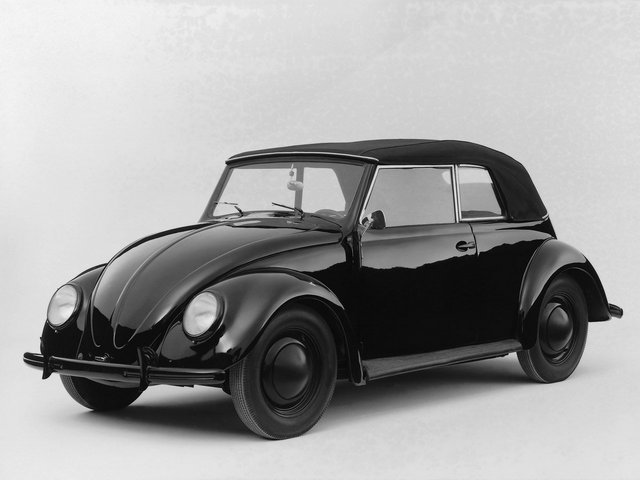 The Führer was more than pleased by the outcome of his small talk: 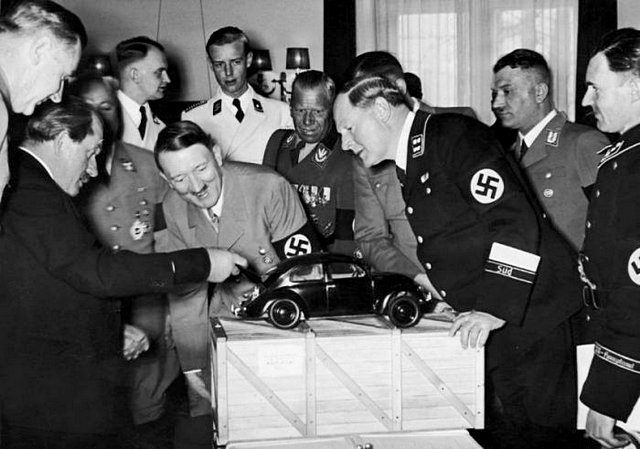 In 1938, the cornerstone of Volkswagenwerk in Fallersleben (now Wolfsburg) was laid: And in 1939 Adolf Hitler became a happy Beetle Convertible owner, the car presented to him at his 50th birthday: 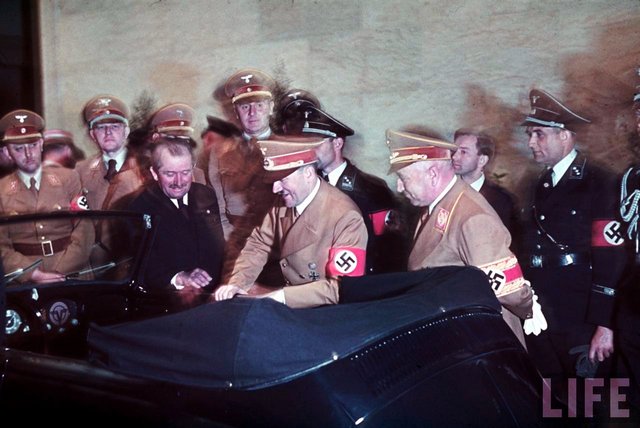 Thousands of prospective owners bought 5 Reichsmark stamps as an advance payment for the new car, hoping to fill the little book (that wasn't easy with an average monthly salary of 300 Reichsmark): 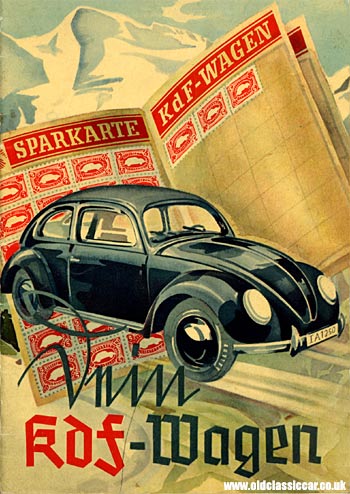 Before WWII, the Volkswagen, renamed the KdF-Wagen (KdF is for Kraft durch Freude, Strength through Joy) was produced in small batches, not more than 200 cars altogether, all given to Nazi officials and the military...

"And the rest is history"? You're kidding. Someday we'll see the rest of this pre-historic story.

* First, though, Porsche sent a memo (dated January 17) detailing points with which Hitler was likely to agree. The Volkswagen would be durable and space-efficient; it would cruise at its maximum speed of 100 kilometers per hour (62 mph) and average about 40 miles per gallon of gas; it would easily climb hills; it should have an easily repairable air-cooled engine (service stations were sparse, and German winters can be harsh); it must be large enough for two adults and three children (the ideal Nazi family) plus their luggage; and its platform must be adaptable to a variety of uses. The last included military applications. (Source: How Stuff Works)

There was a very long discussion in germany about "who was the founder of the Beetle". It's now state of history that it wasn't Ferdinand porsche neither Hitler. The real founder of the beetle was Béla Barényi - an austrian engineer - in 1925. Ferdinand Porsche uses his drafts to made "his own" Beetle, and Adolf Hitler does nothing, as always. He was just talking, he was a master of "blah-blah".

Comment by lord_k on October 8, 2010 at 11:15am
You should see the Nazi thugs getting angry when someone of their own expresses doubt in the authenticity of "Hitler's sketch" (actually, both of them are dubious). For them, the VW is first of all "Führer's baby", no one cares about engineering or Dr. Porsche's achievements (and he had a lot, be sure). That's what, together with a thousand other reasons, prevents me from becoming a Beetle fan. Anyway, this is a great little car, probably the most important one created in the Diesel Era. And every Nazi will burn in Hell.

Comment by Pilsner Panther on October 8, 2010 at 8:17am
The idea of an inexpensive "people's car" (volks-wagen) isn't a bad one, even now, but... anything that's associated with Adolf Hitler makes me cringe. Even so, I once drove one of those little tin cans all the way from San Francisco to Lake Tahoe, and it didn't break down, although it rattled like hell on the grooved mountain highways. So, two-and-half cheers for Nazi tech.