While Dr. Porsche was still testing his Volkswagen prototypes, Italy already had a mass-production "people's car". 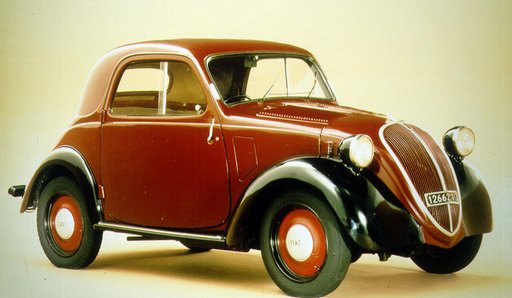 "A pace only marginally quicker than a professional racing cyclist, snail-like acceleration, awkward to work on because of its diminutive size, replacement parts that are breathtakingly expensive. But, aesthetically pleasing lines with universal appeal, frugal fuel consumption and a roomy two seater office with basic but adequate instrumentation."* 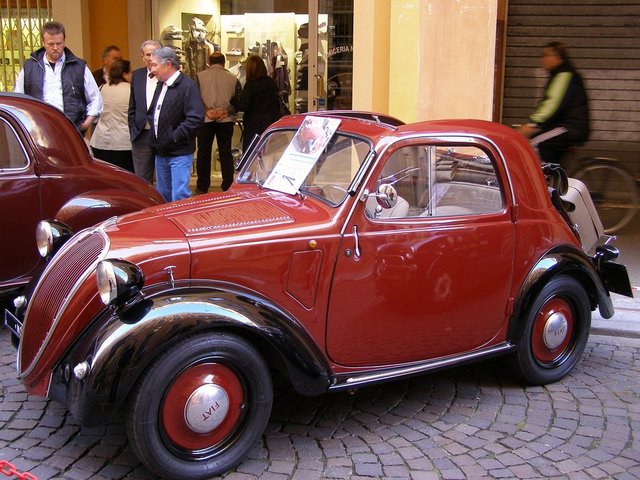 "This is the FIAT 500 produced in Italy from 1936 until 1955. Very quickly and affectionately known as ‘il Topolino’ or little mouse it was arguably the most popular, best-loved mass-produced small car at the time." "A small car was envisaged by FIAT as early as 1919, but although catalogues were produced the car never materialised. In 1934 Senator Agnelli the head of FIAT visualised a small mass produced ‘people's car’ selling for 5,000 lire and capable of carrying two people comfortable together with 50Kg (110 lbs) of luggage." 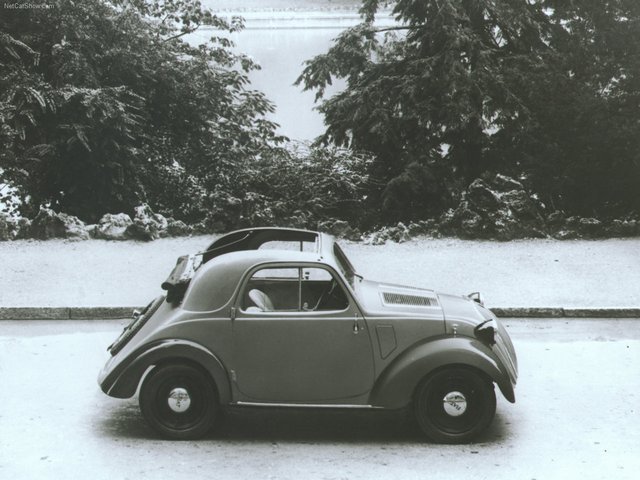 "The task was put in the hands of 29 years old Dante Giacosa, an aeronaughtics engineer whose career with FIAT started in 1928. His work would cover the mechanical content of the car – engine, transmission and chassis. Rudolfo Schaffer, FIAT’s resident coachwork engineer was to design the body at the same time and the two units, when bolted together were to produce a very strong structure." 1935 prototype with headlamps integrated into fenders and spectacular front grille was simplified to reduce production costs.

The car was equipped with a 569 cc four-cylinder, side valve, water-cooled 13 hp engine mounted in front of the front axle, and so was a full-scale car rather than a cyclecar. The engine was fuel-saving, with average consumtion of 39.2 miles per US gallon (6.00 L/100 km).
Topolino's radiator was located behind the engine allowing a lowered aerodynamic profile at a time when competitor vehicles confronted the world with flat near vertical front grills. Actually, the Topolino looked like a diminutive Chrysler Airflow or Peugeot 402. The shape of the car's front gave it exceptional forward visibility. Suspension at the back initially depended on quarter-elliptic rear springs, but somehow buyers frequently squeezed four or five people into the nominally two seater car, and in later models the chassis was extended at the rear to allow for more robust semi-elliptic springs. 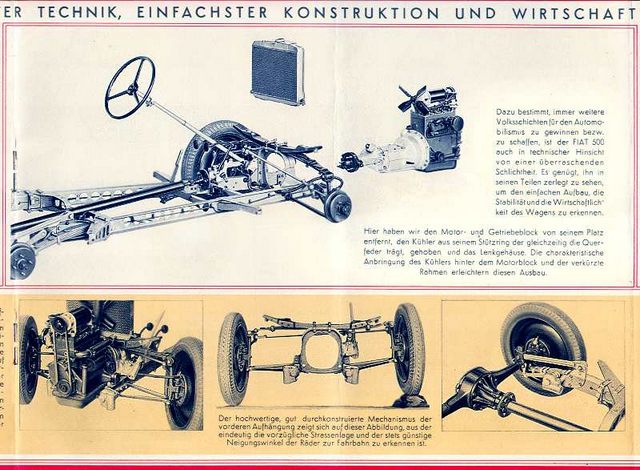 The price appeared much higher than expected. At launch, the FIAT 500 had a 9,750-Lire tag, later reduced to 8,900 Lire (roughly 7,000 Euro today). However, the car was competitively priced and its maintenance cost was very low.

"There are three recognized types as listed below." 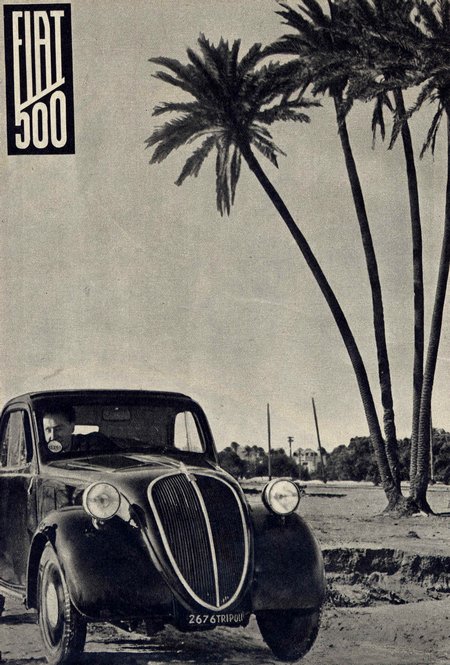 The front mounted engine has four cylinders in-line in a two bearing wear resistant cast iron block. The cylinder head is in aluminium. The engine 569 cc Two side valves per cylinder operated from a single camshaft. Maximum speed is 85 kph (53 mph) and average fuel consumption is 6 litres per 100km (46.8 mpg) 12-volt electrics. The channel section chassis has holes for lightness. Front suspension is independent by transverse spring and wishbone. Rear suspension was originally quarter elliptic cantilever leaf springs and radius arms but was changed after 46,000 chassis were produced to semi elliptic springs and the chassis was lengthened to take them." 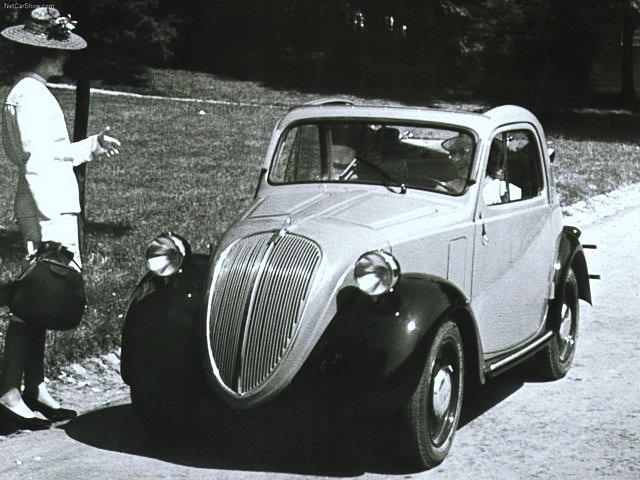 This development of the Topolino was introduced at the 1948 Geneva show. The engine, still of 569 cc was entirely new and had overhead valves. Details to the floor, a new steering wheel, brakes, suspension and electrical equipment were all improved. The only external difference is the new bonnet lock. Maximum speed was increased to 95 kph (59 mph) and fuel consumption improved to 5 litres per 100 km (56 mpg) 12-volt electrics."
"500C 1949-1955 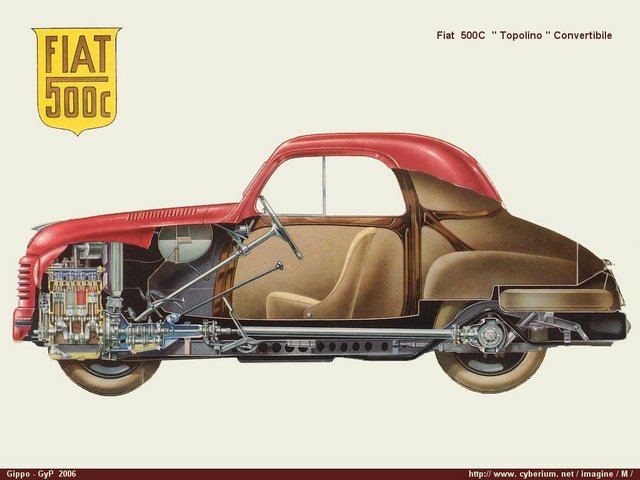 Introduced in 1949 at the Geneva show the ‘C’ version had an entirely new body shape with a separate spare wheel compartment at the rear. 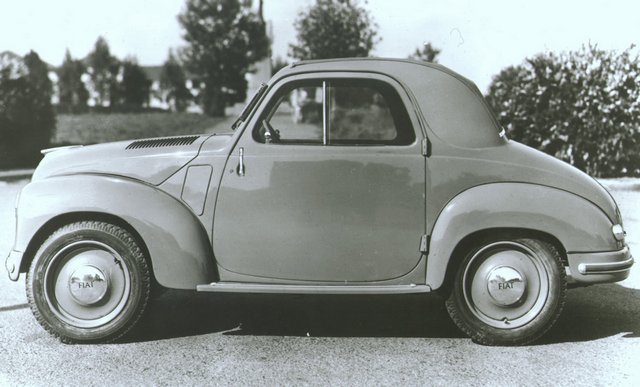 Mechanical details were substantially modified and a new heating / demisting system was the first fitted as standard by FIAT. Performance and fuel consumption were as the 500B. 12-volt electrics." 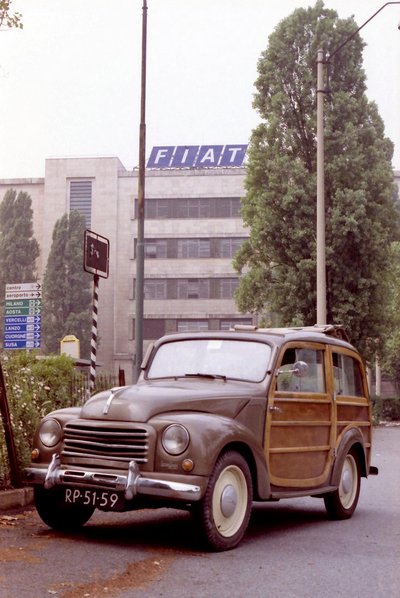 The Topolino was widely exported. In 1938, a special 4-seater version appeared in Great Britain: There are FIAT 500 brochures for every European market, for example Dutch (1939): The car was license-built in France as Simca 5: 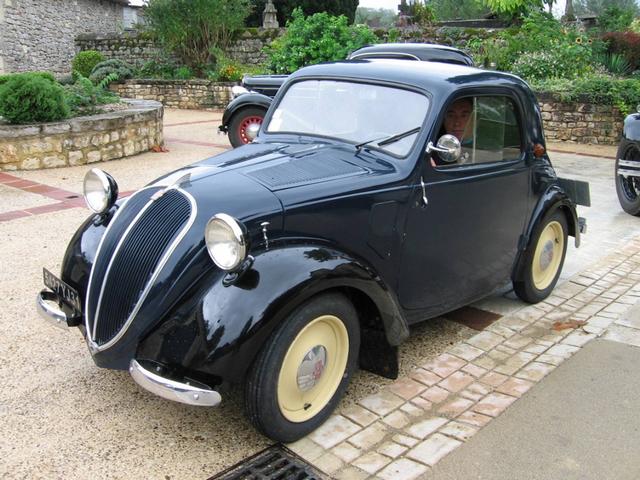 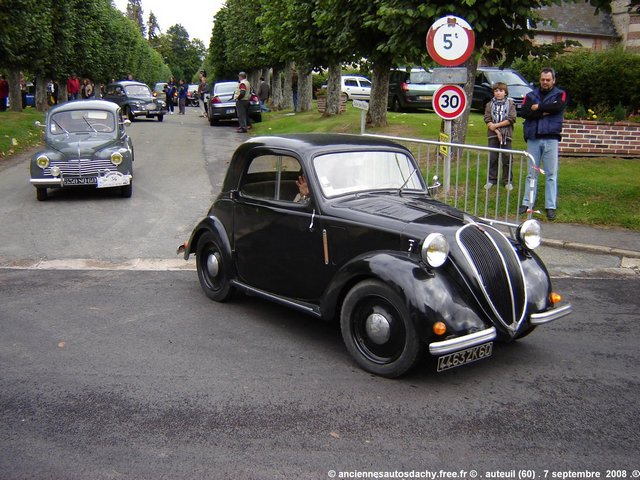 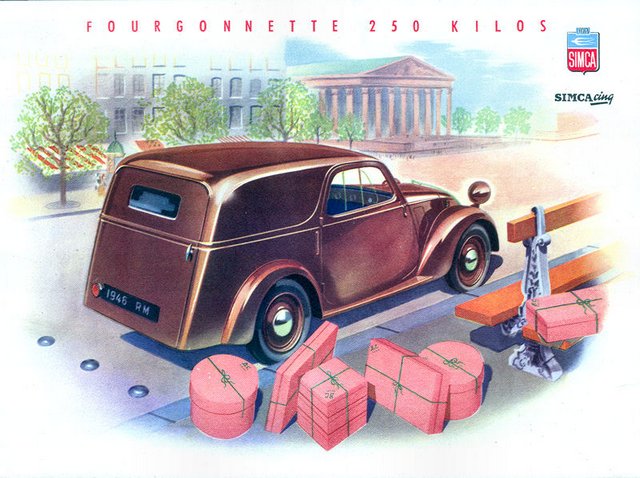 In Germany, the Topolino was built by NSU as NSU FIAT 500. 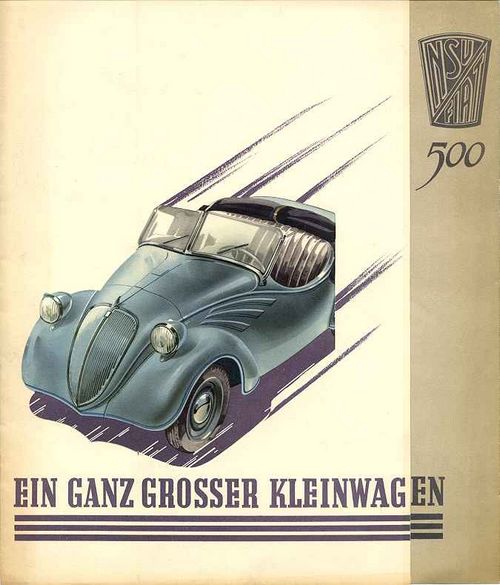 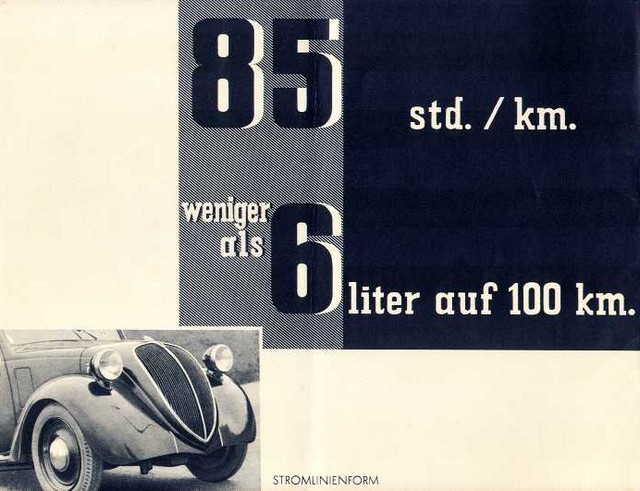 In 1938-1940, Weinsberg supplied a number of beautiful convertible bodies for this model: Finally, meet a German soldier with a standard NSU FIAT: 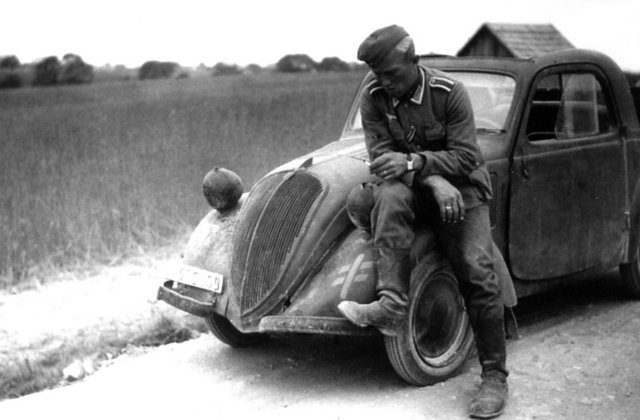 Probably one of you will be lucky enough to get a color photograph of the Topolino in the Italian Colonial paint scheme (yellow). These cars, captured by the Allies, were repainted and served with US white stars on both doors. Wehrmacht used a large fleet of Italian FIAT 500s captured or requisitioned after 1943. Simca 5 was employed by Wehrmacht, Vichy police and Free French forces. So, this little car had a serious war record.
And don't forget Signor Giacosa who created the "little mouse" and other famous FIATs: 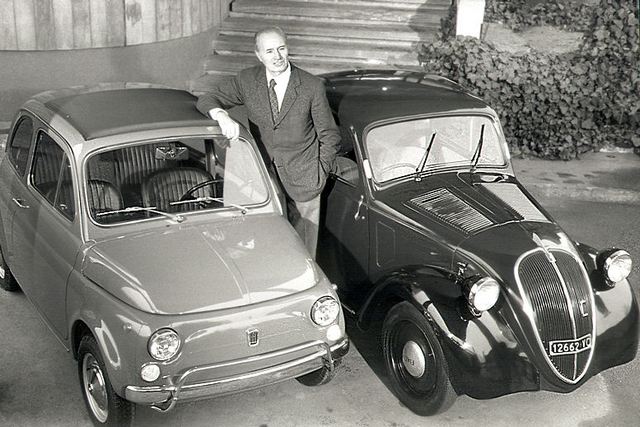 Comment by lord_k on November 6, 2010 at 4:08am
Well, the similarities between totalitarian state and big corporation are quite a commonplace today. Fascists and Nazis learned a lot from Mr. Ford, and Mr. Ford's views were not exactly liberal. But there is one important link in the people's car story: Austin Seven, born in Great Britain right after WWI and inspired by pre-war Peugeot Bebe (designed by no other than Ettore Bugatti). This car was license-built in Germany, France and the States, it was copied by the Japanese (first Datsun), its production run lasted 17 years and its influence was tremendous. Probably I should write something about it.

Comment by Pilsner Panther on November 5, 2010 at 11:13pm
Interesting, that the first "people's car" was American (the Model T), but the next two came from Fascist dictatorships. Does this mean anything, sociologically? Maybe. Fascism and assembly-line production both demand extreme conformity and obedience to established procedures at all times, so they're related in a fundamental way. Just a thought that I'm not inclined to pursue any further...